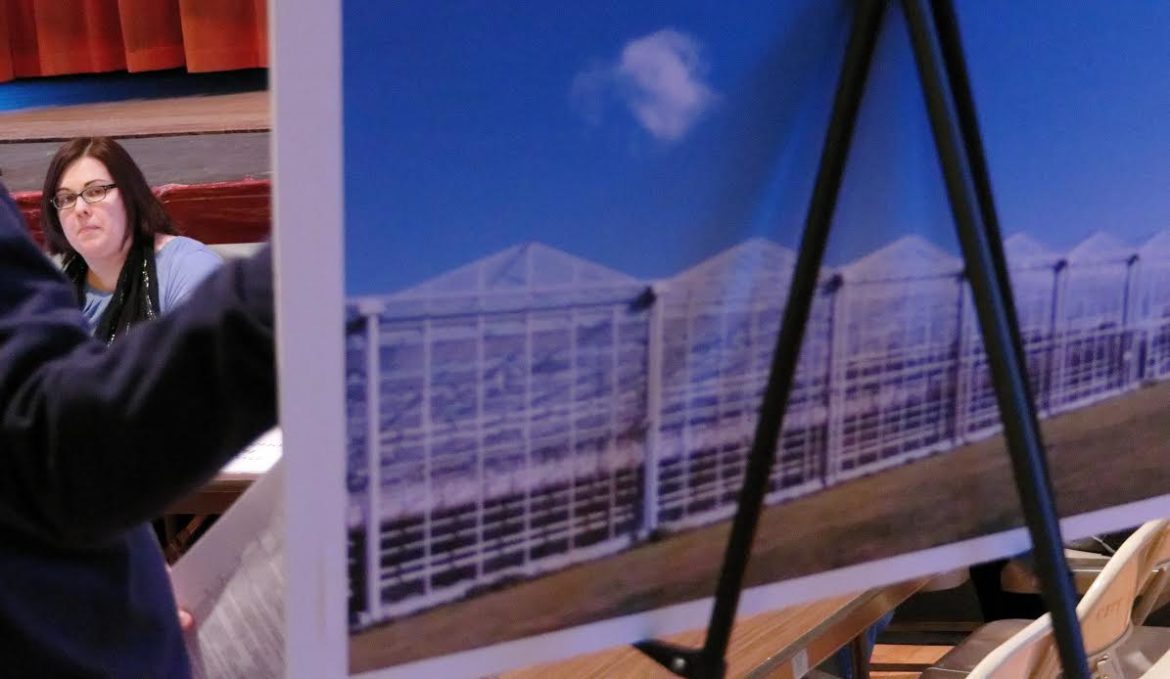 Berlin Community Development Director Pamela Laflamme listens to an explanation of the project at a planning board meeting in March. A photograph of one of the proposed greenhouses was on the back of the diagram of the site plan being discussed. Photo by Chris Jensen

The developers of a $50 million greenhouse project in Berlin have missed another deadline for purchasing land needed for the high-tech project which is expected to provide 80 jobs.

And now construction is not expected to begin until next spring with growing underway towards the end of 2018, said Kelly Wieser, a Campton-based lawyer who helped arrange financing and worked on issues such as permitting.

North Country Growers LLC wants to buy about 170 acres of land from Berlin for about $680,000.

The company plans to grow eight million pounds of tomatoes and 15 million heads of lettuce a year on the site, selling to grocery stores and restaurants in New England.

In September Wieser said the goal was to close on buying the land no later than November 27th. She said the extra time was needed to coordinate some of the financial arrangements.

That is still a work in progress, she said Monday.

“It is par for the course, putting together a big development project these days,” she said.

This is the fifth time in the last six years that North Country Growers parent company – American Ag Energy – has tried to build high-tech greenhouses. None of the previous efforts went beyond the planning stage.

The $50 million project includes a $25 million loan from Service Credit Union. As part of its rural development effort the USDA will guarantee 60 percent of that $25 million.

Private investors are putting up about $17 million and there is an additional $8.3 million loan from Service Credit Union, the USDA said earlier this year.