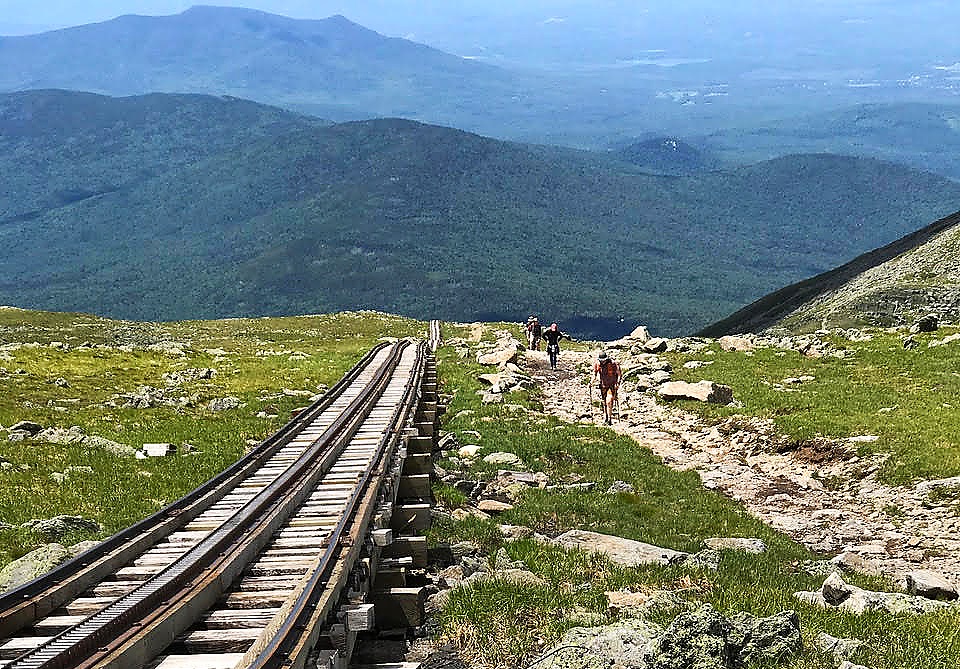 The disputed road or trail photographed in July. Photo courtesy of David Govatski.

The Coos County Commissioners plan to review an environmental group’s claim that the owner of the Cog Railway didn’t have the necessary permit to build a “road” to the top of the mountain that may be used to give tourists winter-time rides in a snowcat.

The issue is on the Dec. 13 agenda, commission chair Tom Brady said.

The commission is responding to a letter from “Keep the Whites Wild,” a small group formed “to preserve and protect the diverse biology, natural aesthetic, and intrinsic value of New England’s White Mountain region.”

The group contends Cog owner Wayne Presby needed a permit from the Coos Planning Board because the “road” runs through an area that the zoning regulations describe as deserving protection due to its high elevation and fragile plant environment.

It is asking the county to issue a “notice of violation.” That would require “the immediate discontinuance of this unlawful action, use or condition and the abatement of the violation.”

But Presby told InDepthNH.org he built a trail, not a road and didn’t need a permit. He said Keep the Whites Wild misunderstands the zoning regulation and his plans.
He said the three-mile trail is for maintenance and also gives emergency responders and others quicker wintertime access to the summit than the auto road, which is eight miles long.

Christopher Magness, the president of the group, said the concern arose after a recent story in The Berlin Daily Sun about an October meeting of The Mount Washington Commission.

The story quotes Presby, who is a member of the commission, saying “the Cog has just opened up a trail to the summit on its right-of-way that he believes will be able to accommodate passenger-carrying snowcats up the three-mile route in winter, a concept that, he said, would soon be tested.”

What Presby calls a trail – and Magness’ group calls a road – runs alongside the railway, following a trench dug in 2008 to bury cables running to the top.

Photos taken in July by a member of Magness’ group show a rocky path that would accommodate two or three hikers astride.

And Presby says what he did is allowed.

But under the zoning regulations, trails don’t allow commercial operations like giving tourists rides in a snowcat, said Jason Reimers, the lawyer for Keep the Whites Wild.

“Well, nobody has used a snowcat on it for commercial operations,” Presby said. He said he is still exploring that idea and if he goes ahead he would use a small snowcat, perhaps eight-feet wide.

Magness’ group also opposes Presby’s plan for a hotel high on the mountain, astride the tracks.

And the issues for the “road” and hotel are similar: concerns about the impact on delicate, high-elevation terrain.

Four years after that 15-foot wide trench was dug in 2008 the two studied the area and reported that “recovery of the alpine plant community had barely begun.”