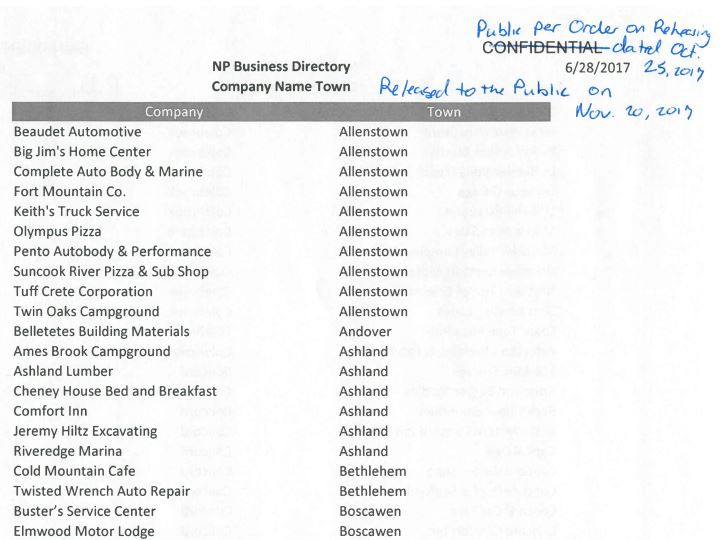 Over the objection of Northern Pass, the Site Evaluation Committee released a list of businesses along the route it had hoped to keep confidential until after a decision is made on its application to build a 192-mile transmission line from Pittsburg to Deerfield.

Northern Pass/Eversource compiled the list of 208 businesses to give to workers who would build the $1.6 billion project and need to find food, lodging and other services during construction. The project fought public release of the business names saying it would violate their privacy interests and some of the businesses could face retaliation from local people who oppose Northern Pass.

Support for Northern Pass was not sought nor required of any business listed in the directory, according to Northern Pass’ website. Most of the businesses are located in one of the 31 communities that will host the lines if the project is approved.

Northern Pass spokesman Martin Murray said the insistence by some opponents to make public the names of those businesses who have agreed to be listed in the directory shows a basic disregard for privacy.

‘’The listing of a name is not a signal of a business’s preference for the project, yet there will likely be some opponents who use this as an opportunity to make it seem so, and in so doing open those businesses up for unfair criticism and harassment,’’ Murray said.

‘’To be clear, our primary concern here is for the privacy of the business owners. The economic benefits associated with more than 2,000 construction workers along the project route are substantial. It serves no need to make public at this time the names of those business who would be included in such a listing,’’ Murray said.

In August, Northern Pass filed a Motion for Rehearing of the SEC order denying its request for temporary confidentiality of the business directory.

InDepthNH.org filed a request under the state’s right-to-know law seeking access to the directory.

Jack Savage, spokesman for the Society for the Protection of New Hampshire Forests, said, ‘’Well, it seems telling that the perceived need for such a list—to distribute to workers building the proposed line—would be because those workers would come from out of state.

‘’Now that the list has been made public—three months after the SEC Chair issued the order—it seems odd that Northern Pass tried to keep it secret. It just goes to show how controversial the Northern Pass project continues to be,’’ Savage said.

A Colebrook tavern owner told the New Hampshire Union Leader he is concerned that people seeing his business even under its previous name on the list, could keep customers away.

“There’s a lot of opposition here and I’m trying to run a business with local people, and people are funny and if they see me in the directory, they may, they’re going to assume I support Northern Pass,” Rick Nadig, managing member of Colebrook Capital LLC, which owns the Black Bear Tavern, formerly the Dancing Bear Pub, told the New Hampshire Union Leader.