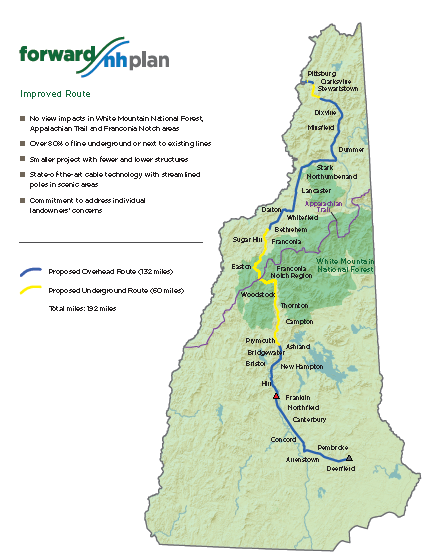 Appraiser and assessor George Sansoucy of Lancaster has often battled Eversource over valuations of utility property and he maintains the existing transmission line through Hopkinton and Dunbarton has lowered assessments for property owners.

In pre-filed testimony Sansoucy said the impact on Dunbarton property value could be as high as $1.6 million, but is probably lower because not all tax cards have the easement reduction listed.

Northern Pass’s real estate expert said the decrease in value was only $280,000.

Attorney Jeremy Walker, representing Northern Pass, said its expert reviewed the 64 Dunbarton properties with easements and 27 of the tax cards do not mention an easement reduction.

He said the total reduction in value is $280,000, but Sansoucy said the easement is included in other discounts listed on the tax cards.

“The easement goes through the land so the property owner is impaired,” he said. “It is impacted.” 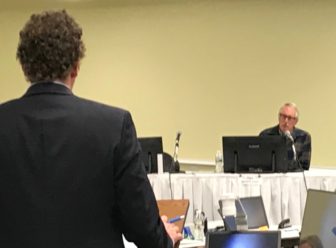 Society for the Protection of NH Forests, Jason Reimers, questions Carl Martland, the chairman of the North Country Scenic Byways Council, about the effect the Northern Pass Transmission Project would have on views from the highways in Coos and Grafton counties during Tuesday’s adjudicative hearing before the Site Evaluation Committee.

The discount is usually not a separate line on the tax card if it is not over 5 percent, Sansoucy said, but generally would be between 5 and 30 percent unless the right-of-way prevents building on the lot, in which case it would be higher.

“I’m trying to get to how much is the impact,” he said, “or is it questionable if the table is even useful.”

Some communities make no adjustment for easements and others like Concord and Hudson are very diligent, Sansoucy said.

“I’m not saying the total number is 100 percent, you can discount 25 to 40 percent, but not below 50 percent,” Sansoucy said. “That would go against the historic value.”

The impact from Northern Pass would be greater than the historical impacts, he said.

Several committee members questioned Sansoucy about his contention that only 30 percent of Northern Pass’s capacity would be used, not the 83 percent claimed by developers.

Sansoucy said the changing electric market means Northern Pass electricity would have to displace some other source most of the time.

Peak hours are between 7 a.m. and 11 p.m. five days a week or 80 hours, he said, but current generators fill the demand for most of that period.

“You just can’t come in and say you’ll push Seabrook out,” Sansoucy said.

What if Northern Pass wins the Massachusetts clean energy contract, asked committee vice chair Kathryn Bailey. “Is it the same?”

“No,” Sansoucy said, “that is already legislated into existence. Somebody else will get kicked out.”

The chair of the North Country Scenic Byways Council, Carl Martland of Sugar Hill, told the committee Tuesday the project would have unreasonable adverse effects along the federally and state designated roads along the 192-mile route.

The transmission project will impact the scenic byways where it crosses the roads, runs along the side, or is in the foreground of a view from the road, he said.

Speaking to attorney Tom Pappas, representing the Counsel for the Public, Martland maintained the severity depends on distance, what would be built, duration and sensitive areas.

He did not do visual impact analysis, he said, but used information from the draft federal environmental impact statement to make his determinations.

Most of the major roads in the North Country are designated as scenic byways, he said, and most other roads provide scenic views.

A section of Pittsburg has an extraordinary view that has been named a national treasure by the National Trust for Historic Preservation, Martland said.

“It is a stunning area,” he said, “but the transmission line will cut a swarth through there. It is an insult really.”

Attorney Barry Needleman, representing Northern Pass, noted Martland was not a visual impact professional, nor an expert on property values.

Martland, who was a researcher and teacher at Massachusetts Institute of Technology, agreed, and noted it was the first time he had testified before the Site Evaluation Committee.

The project will have two effects on the scenic byways, he said, during construction and over the long term.

The buried section is along designated roads, Martland noted, and there is the danger of view changes and business disruption.

“In the longterm, it is a deterrent to the scenic quality of New Hampshire,” he said, “to put in a gash 200 feet wide (in the landscape) that will have a major impact on the scenery of New Hampshire.”

Will people who climb Mount Washington stop coming, or who drive to Weeks State Park or come in the fall to see foliage, Martland asked, and answered, ‘’no.’’

“But they will see the towers and ask what is going on in this wild New Hampshire,” he said.

The next adjudicative hearing will be Dec. 5 at 1 p.m.

The Site Evaluation Committee is not expected to make a final decision on the project until the end of February.