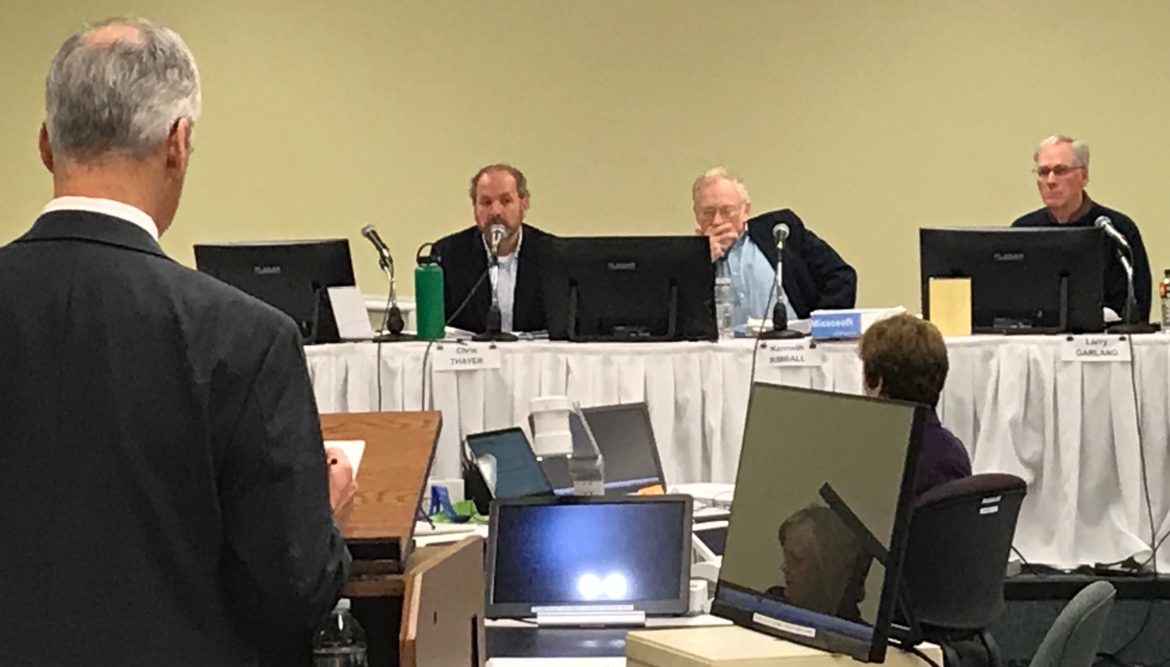 Northern Pass attorney Barry Needleman questions an Appalachian Mountain Club panel of, from left to right, Chris Thayer, Dr. Kenneth Kimball and Larry Garland during Monday's adjudicative hearing before the Site Evaluation Committee. The committee is to decide the fate of the $1.6 billion, high-voltage line.

CONCORD — An assessor and appraiser who has often done battle with Eversource over property valuations did so again Monday during a hearing on the Northern Pass Transmission Project.

George Sansoucy of Lancaster criticized the project’s property value expert’s work saying it does not reflect the magnitude the $1.6 billion project would have on communities and he used out-dated sales data to find little to no effect on property values from the project.

“It has no relationship to Northern Pass,” he told the Site Evaluation Committee. “It’s a generation ago. It may be interesting, but it’s really not relevant to what we are doing here.”

Sansoucy said project developer Eversource under-estimates the impact of the transmission line that would traverse the state from Pittsburg to Deerfield to bring Hydro-Quebec electricity to the New England power grid.

The project’s expert used property along an existing, lower volt, 30-year old project that carries Hydro-Quebec power to determine Northern Pass would not lower property values, Sansoucy said, yet there is no new residential development along that line today.

Northern Pass attorney Barry Needleman said he lives within a mile of the line and there is residential development all along the line in his town and other communities.

But Sansourcy said many of those houses were there before the line was built.

He said Northern Pass’s expert said a residence needs to be close to the proposed 1,090 megawatt line and have a view of the towers to lower property value when it really is just the view of the line that will diminish property values.

Sansoucy also claimed the buried portion of the line from Bethlehem to Bridgewater would eventually hurt property values as people realize they are near 3,000 volts of electricity running underground.

Other utilities with buried electric and communications lines, water systems and especially sewer systems would be more expensive to maintain, Sansoucy said, having to work around and under the 3,000-volt lines.

“The best analogy is a railroad,” Sansoucy said. “Nothing gets done around a railroad without specs, plans or permits and you’ll see the same pressure from a utility.”

But Needleman said the Department of Transportation approval requires Northern Pass to bury the line underneath existing utility lines to the extent possible.

“That does not address completely my concern,” Sansoucy said. “Twenty-four inches is too shallow.”

Sansoucy maintained the project is not needed and would only run at about 30 percent capacity instead of the 83 percent project officials estimate. At 30 percent the project would fail, he said, and New Hampshire ratepayers need to be protected from the parent company’s increased bond costs.

Needleman said his claim the line would only run at 30 percent capacity did not make sense when the small Antrim wind project would run at 37 percent.

Sansoucy claimed peak electric demand is changing as more renewable sources come on line, much of it not regulated by the Independent System Operator.

And Needleman said a Public Utilities Commission order would protect ratepayers, but Sansoucy wanted to read the order and then said that was not what it said.

Need Not a Criteria

The two debated whether the need for project was a requirement for its approval with Needleman maintaining there is no requirement the Site Evaluation Committee find a need to issue a certificate.

“If there is no need, what are we doing here,” Sansoucy said.  “The only reason to approve a project of this magnitude, with this much disruption is if it is in the public’s interest.”

The two battled over how communities should assess the project’s property value.

Sansoucy, who has repeatedly battled the utility in court over assessment methods — winning some and losing some — said the company uses “book value plus depreciation” which eventually ends at zero, while “fair market value” is a better indicator of worth.

The judge found the other assessor more reliable and ruled Sansoucy’s claims were based only on supposition and speculation, Needleman said.

Sansoucy said his assessment was based on an accepted method but the judge was not aware of it.

Attorney Tom Pappas, representing Counsel for the Public, asked Sansoucy if he is familiar with the Granite State Power Link proposal which would transport Hydro-Quebec power along existing right-of-ways in Vermont and New Hampshire, and Sansoucy said he was.

“I believe National Grid (the project developer) has some problems in Vermont,” Pappas said, but Sansoucy disagreed.

He said the proposed upgrade would mount the additional line on top of existing towers to maintain the width of the existing right-of-way.

Once the line enters Littleton there is a 350-foot right-of-way from there to Massachusetts, he noted.

The Vermont right-of-way was caught up in a lengthy court battle 20 years ago.

The line goes through federal land that is now part of the Silvio O. Conte National Wildlife Refuge and the state-owned West Mountain Wildlife Management Area.

Three representatives of the Appalachian Mountain Club were critical of the methods used by the project’s aesthetics experts saying they missed many scenic and historical resources due to inferior data bases.

They said the experts gave high values resources with federal designations, lesser value to state designations and dismissed many conservation easements for lack of public access when that was not true.

Dr. Kenneth Kimball said their experts only found 11 high-value cultural resources while 65 percent were judged to be low value. “It’s hard to imagine a state that advertises itself for its scenic tourism would have so few,” he said.

He was also critical of Eversource’s experts saying they did not give enough weight to public concerns about possible visual impairment form the project.

Calling the comments filed with the commission overwhelming, Kimball, said it would be worth finding out what people thought.

“In most case they know what a high-voltage transmission line is,” he said, “and a good indicator of what people believe the impact on the landscape (would be from the project).”

Chris Thayer, who is in charge of outreach for the club, said if approved, the transmission line would be built at a time when tourism is on an upswing in Coos County.

He acknowledged many of the people visiting the club’s facilities do not mention Northern Pass, saying many come from out of the region and are not aware of the project.

Needleman noted Thayer appeared in two videos that opposed the project and quoted Thayer as saying New Hampshire should not serve as an extension cord to the southern New England energy market.

Needleman referred to Thayer’s pre-filled testimony and said “You’re not suggesting your opinions are actually objective are you?”
Thayer said he has been in the tourism business for 28 years and noted he lives in an area of the state where the project is largely opposed.