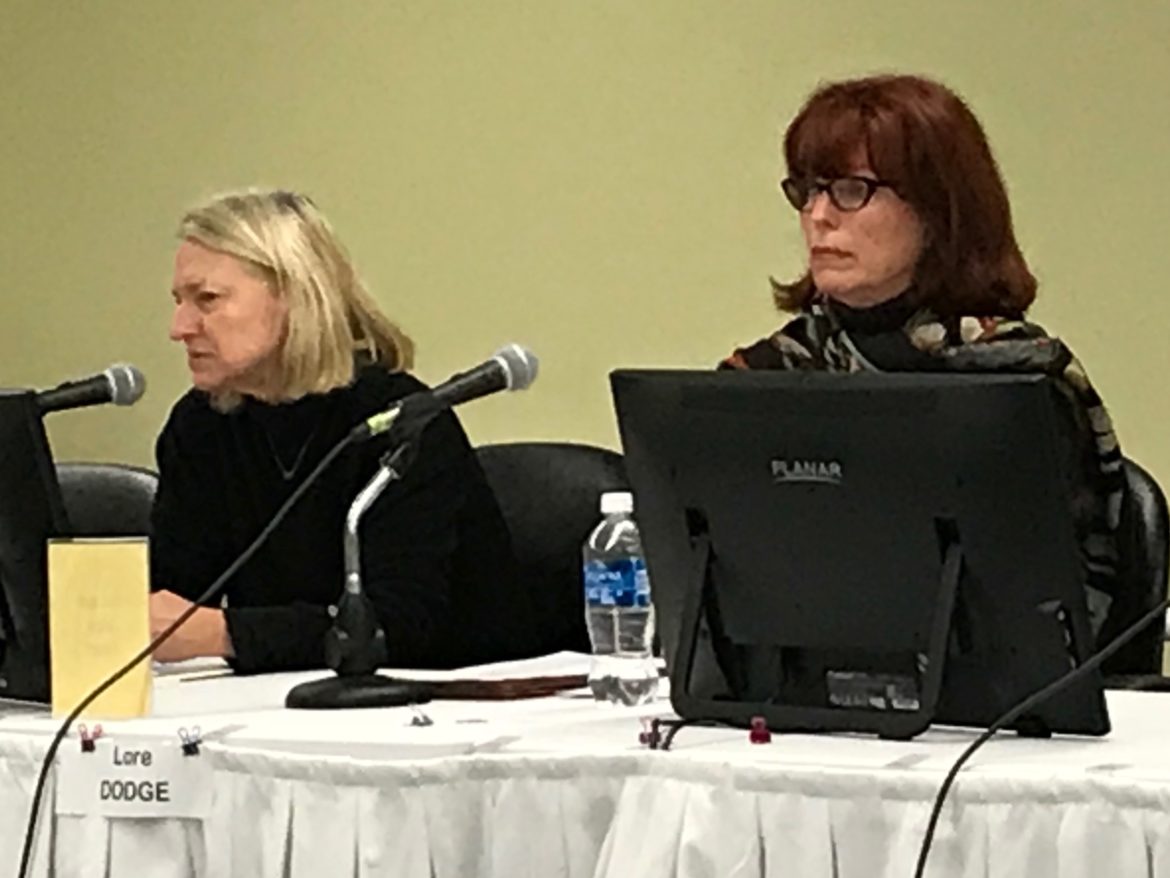 Lise Moran, on the left, and Lore Moran Dodge, testified Friday during the adjudicative hearing on the proposed Northern Pass Transmission Project before the Site Evaluation Committee. The women own family property in Whitefield that would be crossed by the proposed transmission line.

CONCORD — The owners of two long-held family properties in the North Country told the Site Evaluation Committee how the Northern Pass Transmission project — if approved — will change their lives.

“If this project goes through and the property is passed on to my sister and myself, I don’t know if I can ever go back up there and feel the same way,” said Dawn Bilodeau Scribner, whose family owns property in Clarksville near the new right-of-way for the 192-mile project. “I am going to see these towers and going to feel like I let down my family for not doing more to push against this project.”

Her father and mother, Donald and Diane Bilodeau, and her sister, Dana Bilodeau, also appeared before the committee.

Donald said the new towers will be visible from the back deck of the family’s home and a project transition station may also be visible.

He said Northern Pass has twice tried to buy the property but the family is not interested in selling. He said several of their neighbors did sell their properties to Northern Pass.

“We are at a crossroads of what to do with this property,” said Dana. “It’s our family camp where our kids have grown up.”

There are two buildings on the property, one currently occupied by family members, with views of the Presidential Mountain Range, the sisters explained.

Currently a utility right-of-way cuts across a corner of the property but the sisters said they do not see the transmission lines, but will if Northern Pass is built.

“There are no man-made structures in our view since my childhood,” Moran said, “just what is on top of Mount Washington.”

The land was purchased by their grandparents in 1925 when they decided to move from Michigan.

Dodge said they had met with Northern Pass representatives but they offered no mitigation to the family for the diminished views from their property.

The 1,090 megawatts of Hydro-Quebec electricity the project is designed to carry to southern New England may not be able to connect to the New England grid, the Site Evaluation Committee was told by a consultant hired by the New England Power Generators Association, which opposes the project.

William Fowler, president of Sigma Consultants, Inc., explained there are two tests to judge whether additional electricity could be added without damaging the New England grid are not conclusive.

One test — system impact study — is done with just New Hampshire generation, and the other — deliverability — is New England wide.

“A system impact study is an (Independent System Operator) process requirement for all new generation and supply that come into the system,” Fowler said, and “is used to determine whether or not you qualify for the forward capacity market.”

Much of the projected $60 million in savings for New Hampshire ratepayers depends on Hydro-Quebec participating in the forward capacity auction, with generators bidding on how much energy and at what price they will guarantee in three years.

The work done by Eversource’s financial expert, Julia Frayer, was based on 2013 data, Fowler said, while the latest information from ISO-New England heightens concerns.

“This project could have difficulty running,” he said.

Projections show diminishing demand in Northern New England, which is one zone, he said, particularly in Maine where several paper mills have closed.

And a new program being contemplated would require new generation to essentially pay older generating facilities not to produce electricity in order to participate in the market.

If the program is adopted, it could be difficult to add all 1,090 megawatts of Hydro-Quebec power in a single year, rather it may have to be in smaller pieces over several years, Fowler explained.

Fowler also testified in closed session before the committee.

The city of Concord and Northern Pass are negotiating a memorandum of agreement for construction of the Northern Pass Transmission project through the city.

The city of Concord has intervened and opposes the project. The MOU would only apply if Northern Pass is approved over the city’s ongoing opposition.

The project would traverse 8.1 miles through the city from Canterbury to Pembroke.

At Friday’s hearing, City Engineer Ed Roberge said the city wants the utility to go through the city permitting process for such things as driveways for access roads along city streets.

The project would have 30 entrances and exits along city roads.

He said the project is willing to comply with city ordinances and standards.“What if the project found a way to agree to all the requirements for permitting, but not get the permits?” Needleman asked.

“That would not satisfy my concerns,” Roberge said. “We are concerned about consistency and the precedent it would set.”

Whether it is a large utility project or a small park project, the city has a sound process that is fair and has the same consistency, he said.

“We’re the stewards of the public right-of-way,” Roberge said. “That’s important and should apply to all projects.”

The Site Evaluation Committee is not expected to make a final decision on the high-voltage transition line until the end of February.

UPDATED to include – The city of Concord has intervened and opposes the project. The MOU would only apply if Northern Pass is approved over the city’s ongoing opposition.