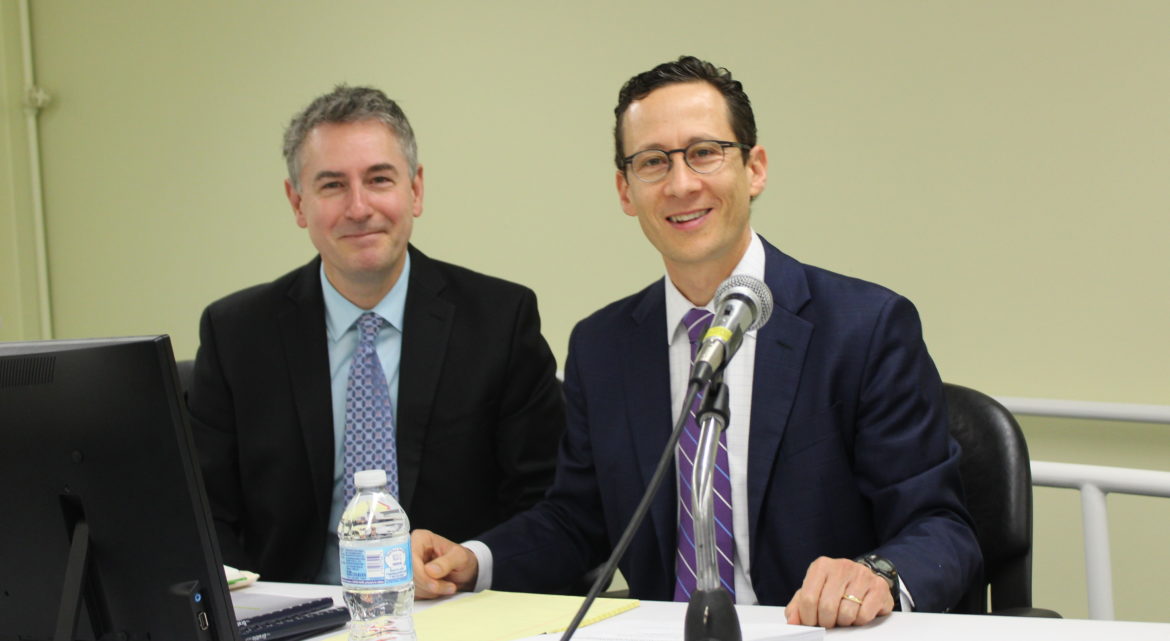 Jurgen Weiss, left, and Samuel Newell, of the Brattle Group, testified Thursday at the Site Evaluation Committee hearing on Northern Pass in Concord.

CONCORD – Attorney Arthur Cunningham reignited debate at Thursday’s adjudicative hearing about whether PSNH ratepayers could end up on the hook for portions of the proposed 1,090 megawatt Northern Pass Transmission line, something the project’s developer has promised all along won’t happen.

Cunningham said the original 2010 Transmission Service Agreement between Northern Pass Transmission and Hydro-Quebec says the AC (alternating current) section of the line from Franklin to Deerfield could be transferred from NPT to Public Service of New Hampshire.

That would then allow PSNH to recoup the construction costs from ratepayers, Cunningham said.

“There’s been no analysis whatsoever of the impact this project will have on PSNH ratepayers,” Cunningham said.

Northern Pass has maintained all along that New Hampshire ratepayers will not pay to construct the project.

Cunningham was questioning Counsel for the Public’s experts Jurgen Weiss and Samuel Newell of the Brattle Group of Cambridge, Mass., on the economic benefits of Northern Pass before the Site Evaluation Committee. On Friday, members of the committee will have the opportunity to question them.

Cunningham said he couldn’t understand why no one has looked more closely at the Transmission Service Agreement and what it could mean to ratepayers.

He represents intervenors Kevin Spencer and Mark Lagasse who oppose the project. They have almost completed building a lodge and campground in Stark costing more than $1 million.

“They are also PSNH ratepayers,” Cunningham told the evaluation committee.

He asked Weiss and Newell about Northern Pass expert Julia Frayer’s calculations about the economic benefits being 90 percent tied to bidding into the forward capacity market.

It’s not clear that NPT would qualify, Cunningham said, adding the project has many uncertainties. There is also nothing in the agreement that requires Northern Pass to bid into the forward capacity market, he said.

“Hydro-Quebec is not a party to this docket at all,” Cunningham said.

Weiss said: “They are an interested party in some ways, but not part of the docket.”

Cunningham went on to say that if the SEC had questions about Hydro-Quebec’s capacity or other technical or business issues, there is no one to ask because it doesn’t have a representative in the proceedings.

Cunningham said: “I think it’s a fatal flaw of this application that Hydro-Quebec is not a party to this docket.”

SEC chairman Martin Honigberg told Cunningham it was a great argument, but asked what it had to do with the testimony of the witnesses before him. Honigberg sustained Needleman’s objection.

Cunningham asked Weiss and Newell if they studied the Transmission Service Agreement where it said the AC line could be transferred from Northern Pass Transmission to PSNH.

They agreed they hadn’t analyzed it.

Cunningham insisted Hydro-Quebec should have been a party to the proceedings since the beginning to be able to answer questions that go unanswered.

“Suppose the whole AC line is transferred back to PSNH, that puts the obligation on PSNH ratepayers,” he said.

Why wouldn’t Hydro-Quebec want to pass on the construction costs if it is legally able to so? “It’s a really great question. I’m sitting here wondering why nobody is analyzing this.”

Because it is a quasi-judicial proceeding with the SEC serving as judge, members of the committee do not speak with reporters. Neither do the attorneys for Northern Pass, referring questions instead to spokesperson Martin Murray, who was not at the hearing.

When the PUC granted Northern Pass public utility status, it noted the “exceedingly remote possibility that the AC portion of the line may someday be designated as necessary for reliability,” Murray said.

If that were to happen, the regional transmission customers in New England might be responsible for paying the remaining costs of that portion of the line, Murray said.

Cunningham said there is a difference.

When asked about Hydro-Quebec’s potential to bid into the forward capacity market, Murray said: “You should certainly feel free to reach out to Hydro-Quebec regarding its plans, but I can remind you that we stand by our expert testimony on the significant savings to customers as a result of the Northern Pass project leading to reductions in costs associated with the Capacity market, and our confidence that Hydro-Quebec  has the existing capacity to earn a place in that market and thereby provide savings to customers by reducing overall Capacity costs compared to what they otherwise would be.”

Cunningham disagreed with Murray that the chance of PSNH ratepayers footing the bill for the AC construction  is remote.

“I don’t think it’s remote at all. I think that’s what they are going to do,” Cunningham said.

Although it is often reported that the high-voltage line will cost $1.6 billion, Cunningham said there is nothing to back up that claim.

“There’s no evidence beyond their promotional material that it’s $1.6 billion. My guess is it exceeds $2 billion or more,” Cunningham said during a break in the hearings. “Remember the early fights between Eversource and Hydro-Quebec about the growing costs of this project.”

Earlier in the day at 49 Donovan St., in Concord, attorney Tom Pappas, representing the Counsel for the Public, questioned the panel about the forward capacity market.

Under the forward capacity market, which is designed to produce reliable electric sources into the future, power generators bid saying they will provide a certain percentage of their generating capacity to the market in three years. New England generators received more than $2 billion for future sales this year although the price has been declining due to lower natural gas prices.

When Northern Pass – through Hydro-Quebec begins bidding in 2020 or so – expert Julia Frayer previously said that will bring the cost per kilowatt hour down and produce savings for all New England consumers.

Other intervenors and attorneys questioned Weiss and Newell about competing transmission projects and other issues. The hearings continue on Friday and through the end of the year as intervenors put on their case.

The site Evaluation Committee must decide whether to approve Northern Pass’ application by the end of February.