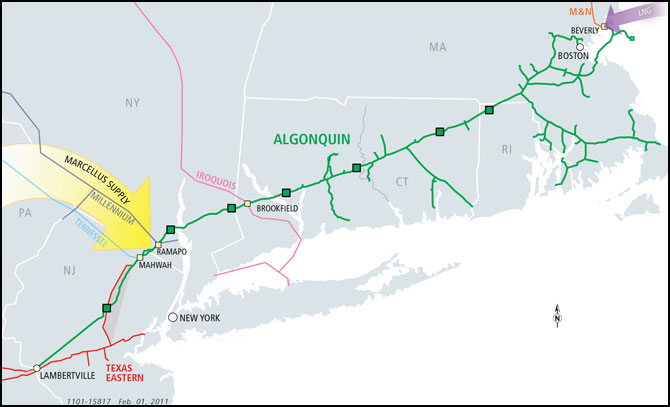 “While frequently attributed to limited pipeline capacity serving the region, we demonstrate that such price spikes have been exacerbated by some gas distribution firms scheduling deliveries without actually flowing gas,” the study said.

By doing so, other firms are blocked from utilizing pipeline capacity. These “unusual scheduling practices” artificially limit gas supply to the region and drives up gas and electricity prices, the study said.

“We find clear patterns of withholding at a subset of delivery nodes operated by Avangrid and Eversource …, the only two firms operating on the pipeline with substantial assets and operations in both the gas distribution market and the electricity generation market,” the study said.

Capacity withholding increased average gas and electricity prices by 38% and 20%, respectively, over the three-year study period, according to the study, “Vertical Market Power in Interconnected Natural Gas and Electricity Markets.” It was posted Wednesday by the Massachusetts Institute of Technology.

“Our focus and actions are driven by our responsibility to ensure our customers have enough gas – we can’t run the risk that they are left in the cold,” Eversource said.

“It appears to be fabricated by anti-pipeline proponents who are trying to make the case that pipeline shortages in New England are due to capacity withholding. To the contrary – it is well documented that New England pipeline demand greatly exceeds the supply on cold days,” Eversource said.

“I have been saying all along that when it comes to making sure there’s enough natural gas in New England to keep everyone warm and the electricity grid from failing during the coldest hours of a very cold winter, there has to be a more creative and cost-effective solution than having an electric distribution utility invest in natural gas pipeline capacity and force its electric customers to pay for it,” Kreis said.

Kreis added: “The whole idea of restructuring the electric industry was to let the marketplace, rather than ratepayers, take on these risks.  This study seems to suggest that we need to make sure we have better market rules in place before we turn the clock back on restructuring.”

Eversource, most recently at the New Hampshire Supreme Court, is seeking the right to invest in natural gas pipeline capacity while passing the costs along on a non-bypassable basis to electric customers in New Hampshire.

The Public Utilities Commission ruled against Eversource’s attempt to use money from electric rates for a new natural gas pipeline, which Eversource has appealed to the state Supreme Court.

Avangrid’s website says it is a diversified energy and utility company with two primary lines of business in 27 states.

The study called for improved regulation.

“While the studied behavior may have been within the firms’ contractual rights, the significant impacts in both the gas and electricity markets underscore the need to improve regulation and coordination as these two energy markets become increasingly interlinked,” the study said.

“Our simulation predicts that underutilized pipeline capacity ultimately resulted in a transfer from New England electricity ratepayers to generators (and their fuel suppliers) of about $3.6 billion over the course of our study period, about half of which occurred during the particularly cold winter of 2013-14,” the study said.

Utility Dive posted a story about the study on Wednesday quoting researchers saying it doesn’t appear that Eversource or Avangrid broke any contract laws or market. UtilityDive wrote: “But if the report’s findings are accurate, industry lawyers say they could amount to violations of federal law — and become one of the biggest price manipulation scandals since the California energy crisis.”

The Eversource statement said revenue related to the regulated electric generation facilities they own and operate in New Hampshire is the same no matter how often the power plants run.

“The plants would not produce more revenue for Eversource as a result of gas capacity issues, as the report falsely alleges,” Eversource said.