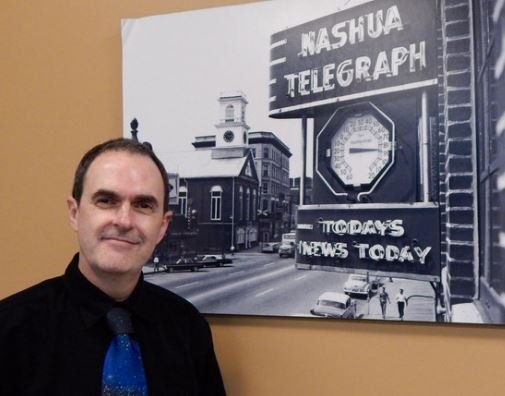 Sandy Bucknam was fired two weeks ago after 39 years and two months with The Telegraph of Nashua.

Another major shakeup is in the works at The Telegraph of Nashua as executive managing editor Sandy Bucknam was fired on Tuesday after 39 years and two months with the newspaper.

City Editor Chris Garofolo gave his two-week notice. Bucknam said he believes more people will be leaving in the near future.

Bucknam said he was fired at 1:30 p.m. by publisher Heather Goodwin Henline for refusing to increase the hours of three salaried employees who are already each putting in about 60 hours a week to avoid paying overtime.

He said he has heard that some employees have taken their complaints to the Department of Labor, but stayed out of it so he wouldn’t have to “rat them out” to the publisher.

Bucknam was fed up with the owners Ogden Newspapers Inc., a West Virginia-based media company that owns more than 40 newspapers across the country, who took over in 2013.

Employees have complained to him describing the work environment as “depressing, toxic and poisonous,” he said.

Heather Goodwin Henline, who was named publisher in April, did not respond to requests for comment.

When the Telegraph announced her appointment, it said she had worked for Ogden Newspapers for more than 20 years. Before The Telegraph, she was publisher and general manager of The Inter-Mountain in Elkins, W.Va.

Ogden Newspapers Inc. bought the Telegraph in April of 2013 and cut one-third of its staff within a couple of weeks. Then it closed its statehouse bureau and laid off well-known political reporter Kevin Landrigan, according to an article in the New Hampshire Business Review. Landrigan now works at the New Hampshire Union Leader.

This comes less than a year after award-winning journalist Roger Carroll resigned as The Telegraph’s executive managing editor after being told to remove facts from a story about the newspaper’s return to downtown Nashua after 30 years in Hudson.

Carroll said he was told after the print newspaper was published Sept. 9, 2016, to remove from the online edition the assessed value of the newspaper’s new downtown building, the price that was paid and any reference to being owned by Ogden. “I thought this kind of censorship showed a staggering disrespect to the role of the newsroom and to the Telegraph’s readers,” Carroll told InDepthNH.org at the time.

Bucknam said Ogden tries to save money by cutting as many staff members as possible and rolling with the most skeleton crew possible.

When the publisher told him that another job wouldn’t be filled after a paginator left, he came up with a plan to redistribute her work among staff members – including part-timers and some overtime.

“There has been tremendous push back on any overtime whatsoever so I was asked by the publisher to revise it using people on salary, including myself,” he said. They were all already doing far more than could be reasonably expected, Bucknam said.

“It was over the top to suggest that I should ask these people for more work. I declined to do it and said I wasn’t going to do it. I was working too much,” he said.

The publisher then told him it was his last day on the job, he said.

Chris Garofolo was named city editor in June 2016 after joining The Telegraph as a reporter in December 2014. Before that, he was a reporter at the Eagle Times of Claremont.

During his tenure at The Telegraph, Garofolo has been a right-to-know advocate. During Sunshine Week last March, he organized with InDepthNH.org a panel discussion in Nashua for citizens to learn how to file right-to-know requests.

Garofolo, who has won several awards in government reporting, declined to comment.

Bucknam said he made the right decision on Tuesday.

“Frankly the pressures the new publisher has put on the job have been extreme,” Bucknam said. “I am glad I am out of there. It’s like a tremendous weight has been lifted.”