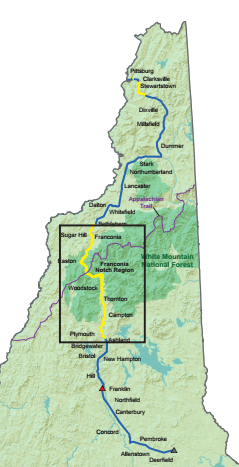 The yellow line indicates sections that will be buried of the proposed Northern Pass Transmission project.

Editor’s note: InDepthNH.org takes no position on the Northern Pass Transmission project. As a public service, we do offer the opportunity for people in favor and opposed to the proposed 192-mile high voltage transmission line to voice their opinions in occasional op-eds. We reserve the right to edit for length. InDepthNH.org cannot guarantee the accuracy of information contained in opinion pieces. We also cannot guarantee that all submissions will be posted. We appreciate all civil discourse. Send op-eds to nancywestnews@gmail.com. Thanks. Nancy West, executive editor.

When Northern Pass announced its intent to bury a 52-mile segment in and around the White Mountains, property owners along the new route faced a rude awakening.

In a stunning move, Northern Pass chose not to use the obvious corridor, Route 93, now a state-designated energy infrastructure corridor. It elected instead to use a torturous route along small state roads, many of which are scenic byways winding through wild countryside, farms and fields, and historic town centers.

We can only speculate upon the reason for this choice. Perhaps Northern Pass selected this route in order to avoid paying our state a lease fee for use of Route 93, a fee which could be used for highway maintenance.

Whatever the reason, the selection of smaller state roads has been fraught with challenges that would be absent in the Route 93 corridor.  Smaller roads such as Route 116 in Franconia and Easton are simply too narrow to accommodate burial of HVDC lines without encroachment upon private property.

Direct burial can be used along wider, limited access corridors such as interstate highways – a 4 foot wide trench dug 4 feet deep, with cable laid directly in the ground covered by heat-dissipating sand with a thin concrete warning layer. Smaller roads with narrow shoulders necessitate a more intrusive type of burial involving deeper trenches and beefed-up duct banks in concrete casing.  It would be just about impossible for an HVDC line to be buried in this fashion using a road easement right of way narrower than four rods (66 feet.)

In both cases, the area above buried installations will need to be a “no-fly zone.” For private property owners whose land abuts the buried line, not only would Northern Pass have the right to remove trees, walls, fences and other features, but homeowners would be prohibited from ever replacing them. Property owners would involuntarily lose the use of their land near these installations. 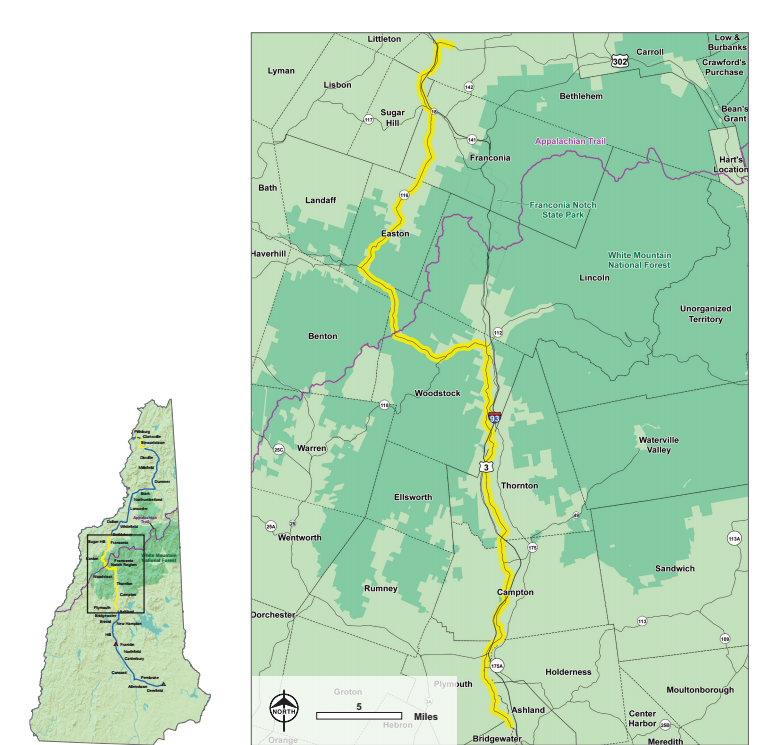 So, here’s the rub.  New Hampshire roads are tricky. They are not usually owned outright by the state but depend on easements on private land stretching back in some cases to the 1700s. The state’s easement rights to its roads vary greatly. The width of the right of way is not standard and is often not clearly established. Northern Pass and DOT have both known from the start that significant portions of the proposed underground route are of undetermined width.

This is true for Route 116 in Franconia and Easton, for example. This country road is lined with old stone walls, large trees, farm buildings and homes that are very close to its edge.  Northern Pass has submitted a survey claiming the right of way width of four rods that it needs in order to install its line, which will involve removal of walls and trees, lawns, fences and gardens that private property owners believe are outside of the right of way. In some cases NP’s line goes through homes. Usage and the historic record indicate widths of only two rods (33 feet) over significant segments of the route.

Statute (RSA 228:35) outlines a process for the DOT Commissioner to reestablish undetermined boundaries. It includes notification of property owners and an opportunity to petition for redress of grievances if the determined easement width is disputed. This procedure has not been followed. Apparently, DOT has chosen instead to accept Northern Pass’s determination of a uniform sixty-six feet width. The department seems poised to subject property owners along Route 116 to a taking of their land without proper procedures taking place.

Northern Pass has applied pressure to a number of state regulatory agencies to get what it wants. The NH Department of Transportation should resist the pressure to accept a survey advantageous to the project, supplied by the project, and follow New Hampshire statute to determine fairly the relevant road easement widths. To do otherwise involves the state in a questionable taking of private citizens’ land, because in 2012 the legislature ruled that elective projects like Northern Pass have no right to eminent domain, whether the Public Utilities Commission overtly grants it, or, as would be the case here, the DOT tacitly facilitates it.

Nancy Martland  lives in Sugar Hill and has been a longtime opponent to Northern Pass. She is also an intervener representing the Sugar Hill Historical Museum.

The proposed Northern Pass line crosses the Canadian border in Pittsburg and heads south into Clarksville, as was previously proposed. The line travels underground in two separate areas of Clarksville and Stewartstown for a total of 8 miles.

The line then travels overhead into Grafton County where it again goes underground in Bethlehem where the transmission corridor meets Route 302 near Miller Pond. It travels underground to Route 18 into Sugar Hill and heads underground along this road, as well as portions of Route 116, Route 112 and Route 3 into Bridgewater, where the line returns to overhead. From there the line travels to Franklin, where it is converted from direct current (DC) to alternating current (AC). The line continues overhead into Deerfield, where it enters the New England electric grid at a substation on Cate Road.