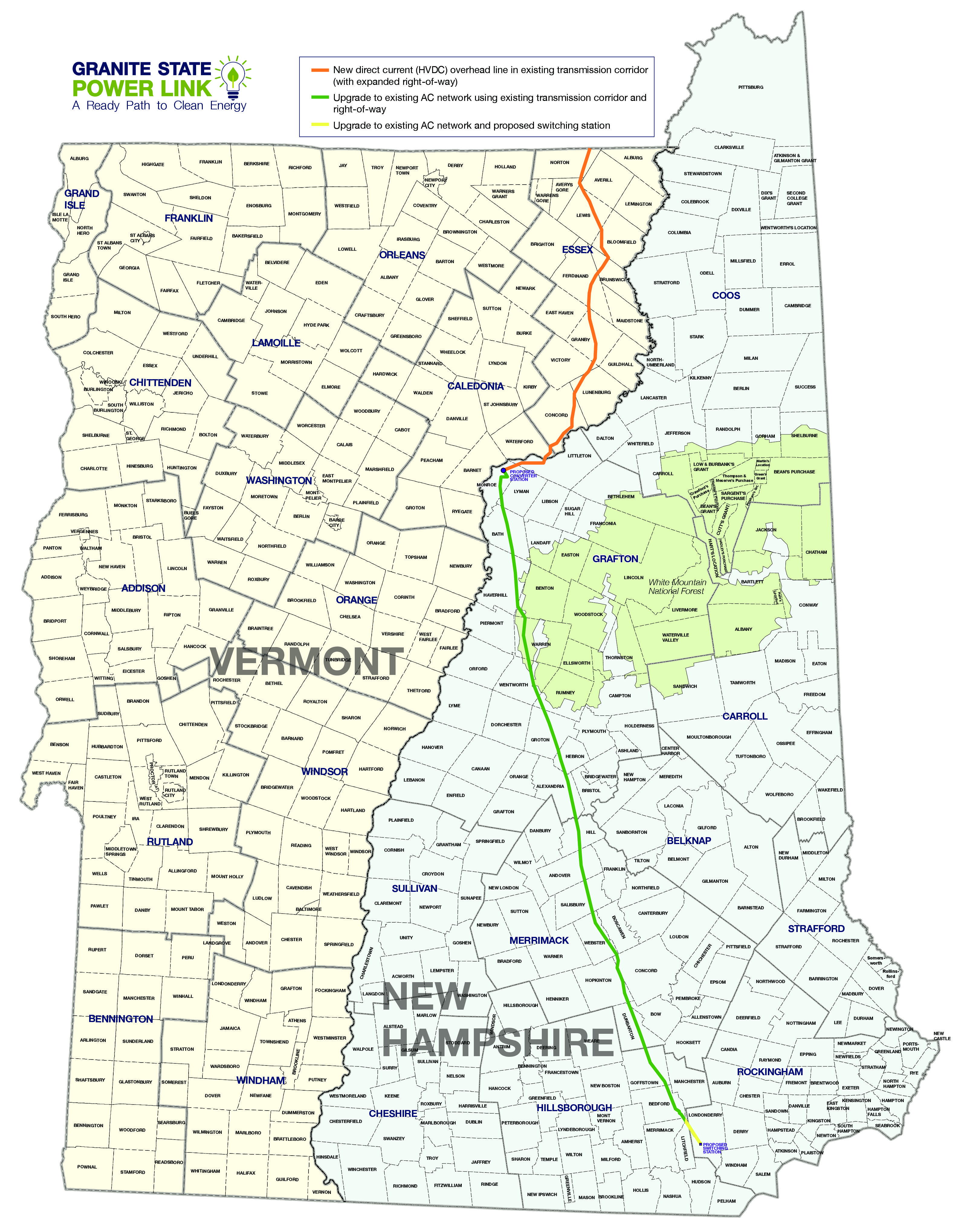 Utility giant National Grid provided lots of surprises Tuesday when it announced plans for a transmission project to deliver up to 1,200 megawatts of renewable energy from Quebec to Vermont, then down a mostly existing corridor in New Hampshire.

The Granite State Power Link would run from Quebec through nine towns in Vermont, then cross the Connecticut River into New Hampshire at Littleton, through part of Concord and continue on to Londonderry.

The project would include hydro and wind power and will impact a total of 23 municipalities in New Hampshire, according to GSPL project director Joe Rossignoli.

The Forest Society views National Grid’s proposal as competition that would easily beat the separate pending Northern Pass application to bring 1,090 megawatts of hydropower from Hydro-Quebec to New England via a 192-mile transmission line from Pittsburg to Deerfield.

“But we recognize that it may well blow Northern Pass out of the water,” Savage said. It would accomplish the same goal as Northern Pass, he said.

“Today’s announcement by National Grid speaks to the regional need for new sources of reliable and clean power to replace retiring power plants across New England,” Murray said in an email to InDepthNH.org.

“ISO New England has stated that new transmission infrastructure will be necessary to reach clean energy sources, and warned that we will need to address a loss of more than 4,000 megawatts of electric capacity in the immediate future,” Murray said.

He went on to explain that there are numerous projects that have been announced in the region that are in the early stages of planning and development.

“Northern Pass stands in contrast to these concept projects because it is in the advanced stages of permitting in both the U.S. and Canada, and has a confirmed source of clean, reliable power,” Murray said.

“Given Hydro-Quebec’s recent statements regarding their unwillingness to pay for Northern Pass, it would seem that Northern Pass just got pushed to the back of the line,” Savage said.

“Apparently we finally have a straight answer— it can. And it would appear to be a viable alternative to Northern Pass,” Savage said.

Rossignoli said the project has been contacting state and local leaders in New Hampshire, but several important stakeholders seemed in the dark late Tuesday.

“I don’t know what you’re talking about,” Sweet said Tuesday when reached by phone. The Littleton Board of Selectmen met Monday night and no one mentioned a thing about the new plan, Sweet said.

Michael Iacopino, attorney for the state Site Evaluation Committee, which must decide to approve or deny Northern Pass’s application by Sept. 31, said late Tuesday afternoon that he hadn’t heard anything about National Grid’s proposal, either.

Staff at the Public Utilities Commission and Site Evaluation Committee said the National Grid press release surprised them and said nothing has been filed.

Applicants seeking approval of transmission projects over 100 kilovolts – with some exceptions – are required to apply for a Site Evaluation Committee permit, Iacopino said.

They must also hold informational meetings in every county through which the line will traverse at least 30 days before filing, he said.

“National Grid has not done me the courtesy of reaching out to me directly to brief me on its proposal or, generally, to make sure I understand its plan.

“It appears that if both projects are built – a big ‘if’ at this point — they would compete with each other for opportunities to move power south from Quebec into the major load centers of New England,” Kreis said.

It is a commercial project and its development will be funded by National Grid and its investors, not customers of its regulated companies, according to the news release.

The release also said the Massachusetts-based Citizens Energy has pledged to use 50 percent of its own profits from the project to fund energy assistance programs for local families living in New Hampshire and Vermont, the release said.

The project is also expects to create 2,000 jobs during construction and lower energy costs across New England by $1.1 billion over its first 10 years of operation, the release stated.