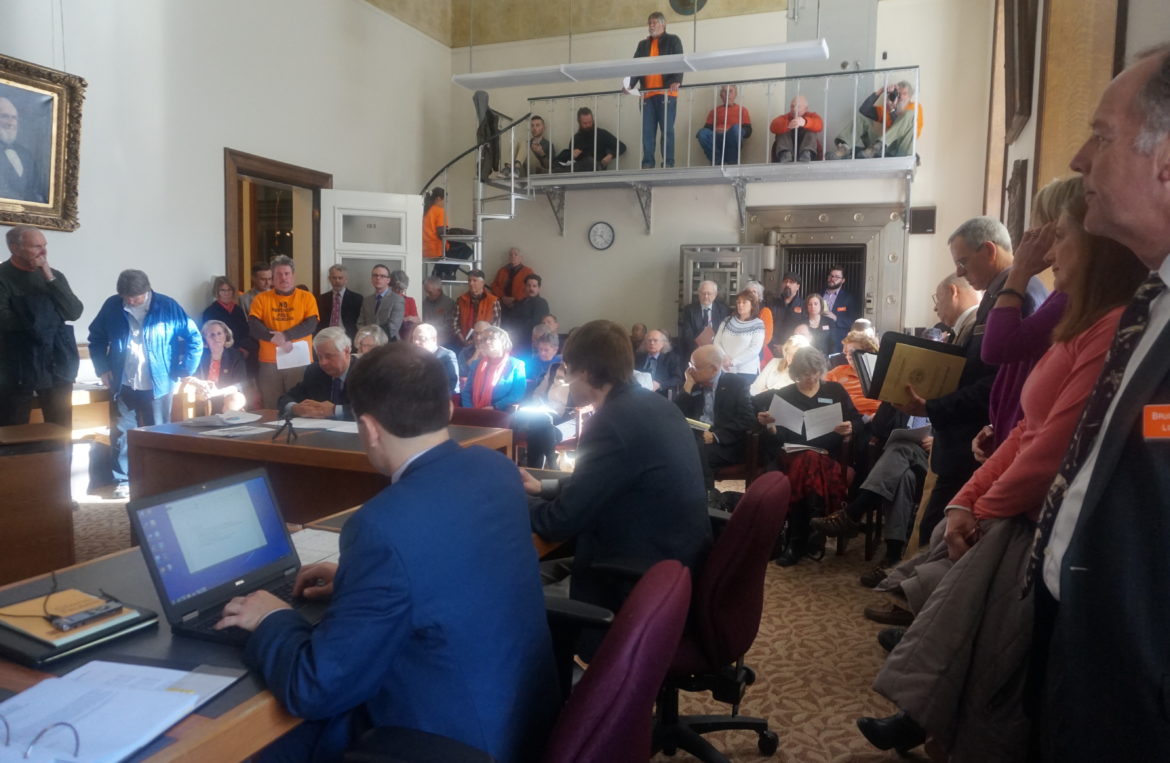 State House Room 103 in Concord was too small for the crowd that turned out for a public hearing on SB 128 Tuesday. Sen. Jeb Bradley is pictured speaking.

After this story was posted on Wednesday, there was some disagreement over whether SB 128 could in fact allow Northern Pass to pass on construction costs to consumers.

But state Sen. Jeff Woodburn, D-Dalton, said he believes his comments were correct that SB 128, if passed, could allow Northern Pass to recoup construction costs from consumers.

Woodburn said he was briefed by two Democratic senators on the Senate Energy and Natural Resources Committee, Sen. Martha Fuller Clark and Sen. Dan Feltes. Woodburn said he checked back with Feltes to make sure he wasn’t mistaken.

“I stand by my interpretation. If there is no intention for ratepayer dollars to be used, there should be no reason not to clarify it. If someone shows me I’m incorrect, I am open to listening,” Woodburn said. “People choose to be clear and people choose to be unclear.”

On Wednesday night, Sen. Feltes said: “The bill as written would open the door for the PUC to consider approving any type of power purchase agreement, including for state-level approved construction costs.”

“I don’t believe my legislation would allow the recovery of construction costs. Rather it allows the PUC to consider whether the purchase of power makes sense if it lowers rates, decreases price volatility and increases reliability.

“Those are the kinds of things the Public Utilities Commission would have to consider in approving any power purchase agreement,” Bradley said.

Sen. Kevin Avard, R-Nashua, chairman of the Senate Energy and Natural Resources Committee, said because of the confusion surrounding the bill and concern that it could possibly benefit the Kinder Morgan pipeline, he is walking away from it even though he is a co-sponsor.

“I’m backing off this bill. It was designed to lower rates. That was its primary function,” Avard said. “This bill is being hijacked. I can’t support it if it would allow Kinder Morgan to come through my district.”

Original story posted Wednesday morning — CONCORD — There weren’t enough seats for the crowd that turned out for a public hearing Tuesday on a bill proposed by state Sen. Jeb Bradley that would allow electric utilities to pass on the costs of new projects to consumers.

Senate Bill 128 is either the panacea that would finally lower New Hampshire’s high electric bills or it would set the state back 20 years, depending on who did the talking in crowded Room 103 at the statehouse. 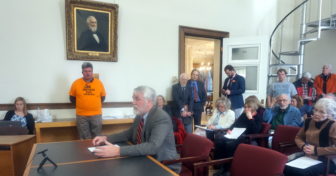 Sen. Jeff Woodburn, D-Dalton opposed the bill because it would allow the Public Utilities Commission to consider whether Northern Pass could bill ratepayers for construction of the controversial 192-mile transmission line from Pittsburg to Deerfield.

“I respectfully request that the bill be retained … and not be in such a rush on this matter,” Woodburn said. Senate Bill 128 is an overreach at a time when restraint is needed, he said.

Bradley, a Republican from Wolfeboro who sponsored the bill, said: “It’s against the backdrop of higher electric rates that we have to consider a measure such as this if we are going to do something about retaining businesses.”

Bradley acknowledged that opponents of projects like the Kinder Morgan natural gas pipeline and Northern Pass were in the room. But he insisted that if passed, the bill wouldn’t give an edge to any single project and no project was named in the bill.

He wrote the legislation, Bradley said, in response to the Public Utilities Commission decision in the Spectra case that rejected Eversource’s request to finance a natural gas pipeline with money from ratepayers.

Some people were upset because they couldn’t get into the hearing room because it was so crowded. An estimated 75 people attended.

Bill Duchano of Deerfield and Laura Lynch of Temple complained about not hearing what was going on, although seats in the room did open up later as people left the three-hour hearing.

“They locked out most of the opposition,” Duchano said. He has been critical of Northern Pass.

“The room’s too small. There’s tons of us out in the hallway. We’d like to hear what’s going on with the bill,” Duchano said. Lynch said she fought the Kinder Morgan pipeline proposal for two years.

“RESA believes it would result in a significant reversal of the current retail choices and cost savings benefits enjoyed by New Hampshire customers as a result of restructuring,” said Patch.

Stephanie Lamb of the Business and Industry Association, said high electricity rates are driving businesses out of New Hampshire and hindering new ones from coming in.

“There is no incentive for new businesses to enter ..,” Lamb said. “We view (SB 128) as an important tool for the PUC and utilities to work together to see what other opportunities are out there” to lower electric rates, Lamb said.

“It’s factual that we are in a significant situation in the state. We don’t have the luxury to wait. We have to act now because our businesses are leaving,” Lamb said.

Sen. Martha Fuller Clark, D-Portsmouth, asked Lamb if she would provide the committee with data to show how many new businesses and startups there have been recently in New Hampshire.

Fuller Clark also asked Lamb if businesses were aware of other ways to cut electricity costs such as implementing energy efficiencies and purchasing from other sources.

They were, Lamb said, adding, “It’s not enough.”

Fuller Clark said: “My concern is we are in a rapidly changing energy market.”

How can consumers be assured that that long-term contracts “are not going to backfire as we begin to see more and more changes happening and end up with stranded costs in spite of the best intentions,” Fuller Clark said.

Although there was disagreement over exactly what the bill would do, Senate Bill 128’s analysis says:.

“This bill modifies electric utility restructuring policy principles by permitting electric utilities to pursue measures to mitigate the cost of electric service, reduce the price volatility of that service, and/or reduce the potential for disruptions in electricity supply, subject to the commission’s determination that such measures are in the public interest.”