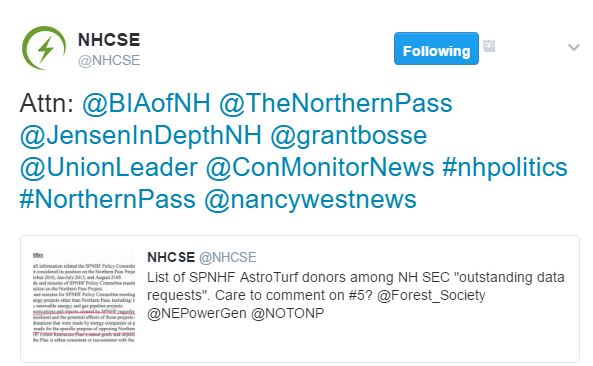 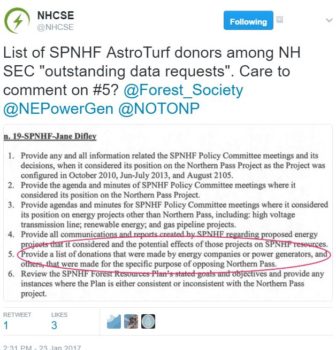 Tweet sent out on Monday by the New Hampshire Coalition for Secure Energy.

Northern Pass wants to know who donated to the Society for the Protection of New Hampshire Forests specifically to oppose its proposed 192-mile extra high-voltage powerline from Pittsburg to Deerfield, according to a memo posted Monday on the state Site Evaluation Committee website.

And to make sure it didn’t escape the attention of the press, a group called the New Hampshire Coalition for Secure Energy tweeted the requests with No. 5 circled in red to a handful of reporters, including InDepthNH.org, and the Business and Industry Association.

The tweet asked New England Power Generators Association, NOTONP and the forest society to respond to the data request. “Care to comment on #5,” the tweet asked.

Dan Dolan president of the New England Power Generators Association said: “I can say categorically that we have not provided any funding to the forest society or any other party.” NEPGA is a partial intervenor in Northern Pass.

Savage went on to say, “I think Northern Pass is obsessed with this topic because the little support they’ve gotten for their project has come almost exclusively from people and interests who have received money or hope to make money as a result of the project. Apparently, they assume opinions are only ever bought and sold because that’s how they do business.”

Martin Murray, spokesperson for Northern Pass, did not respond to an email seeking comment, but the project has made it clear in filings with the S.E.C. that it wants more information than the forest society has turned over in the discovery phase of the complex siting process.

Northern Pass attorney Thomas Getz filed a motion to compel on Jan. 9 to require the forest society to produce documents it has not turned over as requested.

The request said: “Please produce all internal and external documents and communications regarding NPT or the Project between and among members of SPNHF, including, but not limited to all documents and communications between the Forest Society Board of Trustees regarding NPT or the Project from the time when the initial Northern Pass project proposal was first announced in 2010 to present.

“Included in your response, please produce all documents and communications relating to the Forest Society Board of Trustees vote in January 2011 to ‘oppose the Northern Pass project as proposed’ and the Board’s decision to update its position on the Project in September 2013,” Getz wrote.

In a limited objection to Northern Pass’ data request dated Jan. 23, Amy Manzelli, the attorney representing the forest society, objected to each of six data requests claiming they were not relevant, vague, overly broad, burdensome, and protected by attorney-client privilege.

According to Joseph Casey, a representative of IBEW, New Hampshire Coalition for Secure Energy is a pro-Northern Pass advocacy group started by supporters of the project. “The Twitter account is run by individuals who support Northern Pass, but is not affiliated with IBEW in an official capacity,” Casey said.

Casey and Robert Clegg, a former Republican state senator who is now a lobbyist, are listed on documents filed with the NH Secretary of State to get a trade name for the organization in 2011.

Other requests were made to Coos County Business and Employers Group, and IBEW officials who also answered questions at last week’s session.

The technical sessions are held so the parties can ask witnesses for Counsel for the Public and the intervenors about their expertise, opinions, and pre-filed testimony.

The technical sessions will continue through Feb. 14 and the final adjudicatory hearings are scheduled for 29 days from April to July. Then the S.E.C. subcommittee hearing the Northern Pass application will make its decision to approve or deny.