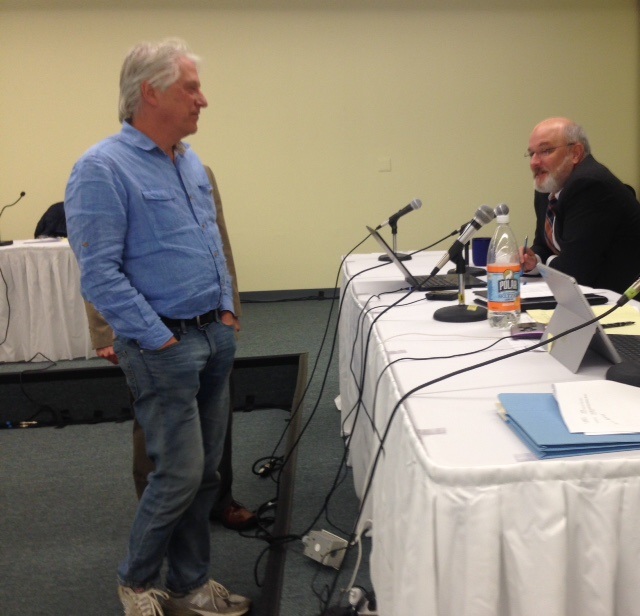 CONCORD – Balsams developer Les Otten said at a recent technical session that a $2 million loan he received from Northern Pass’ $200 million Forward NH Fund was not conditioned on his support of the controversial plan to build a 192-mile high-voltage transmission line from Pittsburg to Deerfield.

“That support is not conditioned on anything other than that is something that I decided that I wanted to do,” Otten said.

When pressed by attorney Amy Manzelli, who represents the Society for the Protection of New Hampshire Forests, if his support of the project was necessary to receive the loan, Otten answered, “The loan. No.”

“Was anything else provided to the Balsams conditioned upon your support?” Manzelli asked.

Otten responded: “There are no other documents that I’m going to discuss or talk about at this juncture and I do not feel I need to support Northern Pass for any reason other than I believe it’s beneficial to me and my business.”

Otten, who is an intervenor in support of Northern Pass, answered questions Thursday at a technical session as part of the Site Evaluation Committee’s process to determine whether to approve or deny Northern Pass’ application.

Several times during questioning, Otten suggested Manzelli was trying to shine a negative light on his responses.

“I understand that much of this is trying to discredit my testimony and either impugn me or put a cloud. I can only answer that I was interested in Northern Pass well before the Forward NH Fund was established,” Otten said.

According to the Northern Pass website, the Forward NH Fund is intended to support clean energy innovations, economic development, community investment, and tourism.

Otten restated his pre-filed testimony that Northern Pass will save the Balsams $200,000 a year in electricity costs.

Planning a $1.5 billion turn-around of the historic Balsams Hotel in the White Mountains, Otten said an advance against the Forward NH Plan helped his project.

“My opinion hasn’t changed because of the money…,” Otten said.

The project must also obtain federal approval because it crosses international borders.

The ruling did allow the forest society to question Otten at the technical session and to do so again at the final hearings since he favors the project and received a $2 million loan. That’s enough for the S.E.C. to consider whether “the Balsams and its witnesses are biased in favor of the project because of the advance commitment,” Honigberg wrote.

Otten spoke at length about his belief that the benefits to be realized for the economically depressed North Country if Northern Pass is built will outweigh any negative impacts.

There will be 3,000 jobs created, millions of dollars in tax benefits, and economic development for a region still reeling from job losses in the paper industry, he said.

And there could be more money from Northern Pass for the Balsams, Otten said.

“There could be a further investment in the Balsams from the Forward NH Fund. That’s on the public record,” Otten said.

There was no mention of an amount or whether Otten heard that directly from Northern Pass officials.

“I’m literally going to ask for my fair share if they are available,” Otten said of future funds. “I’m not going to expand on my answer beyond what I said.”

Extra high-voltage powerlines have no adverse effect on tourism or property values, he said.

“I have never felt that powerline construction has had an adverse effect on the industry I’m involved in, which is primarily the winter resort industry,” Otten said.

Otten said he has witnessed the benefits first-hand.

“I’ve seen the benefits that come from renewable power and I personally believe that the benefits far exceed the negative visual impacts,” Otten said.

When asked about the peace and tranquility of the North Country during the two years of construction, Otten said: “I don’t think I have an opinion about that.”

The project would lower carbon dioxide emissions by up to 3.3 million tons per year or the equivalent of removing 690,000 cars from the road, Otten said.

“I fully understand the argument against Northern Pass, but my opinion is the need for clean power in the marketplace is more important than any short-term dislocation,” Otten said.

On Monday, several North Country municipal groups, along with Deerfield and Joan and Philip Bilodeau of Deerfield will be available for questions. The technical sessions are held at 49 Donovan St. in Concord.

This is the discovery phase of the complex legal process in which the parties informally exchange information and seek additional data.

The next step will be the adjudicatory proceedings scheduled for 29 days in April, May, June and July in Concord. They will be evidentiary hearings with sworn testimony that are open to the public.

The Site Evaluation Committee may then deliberate on the merits of granting or denying a certificate of Site and Facility to Northern Pass, according to the S.E.C. website.