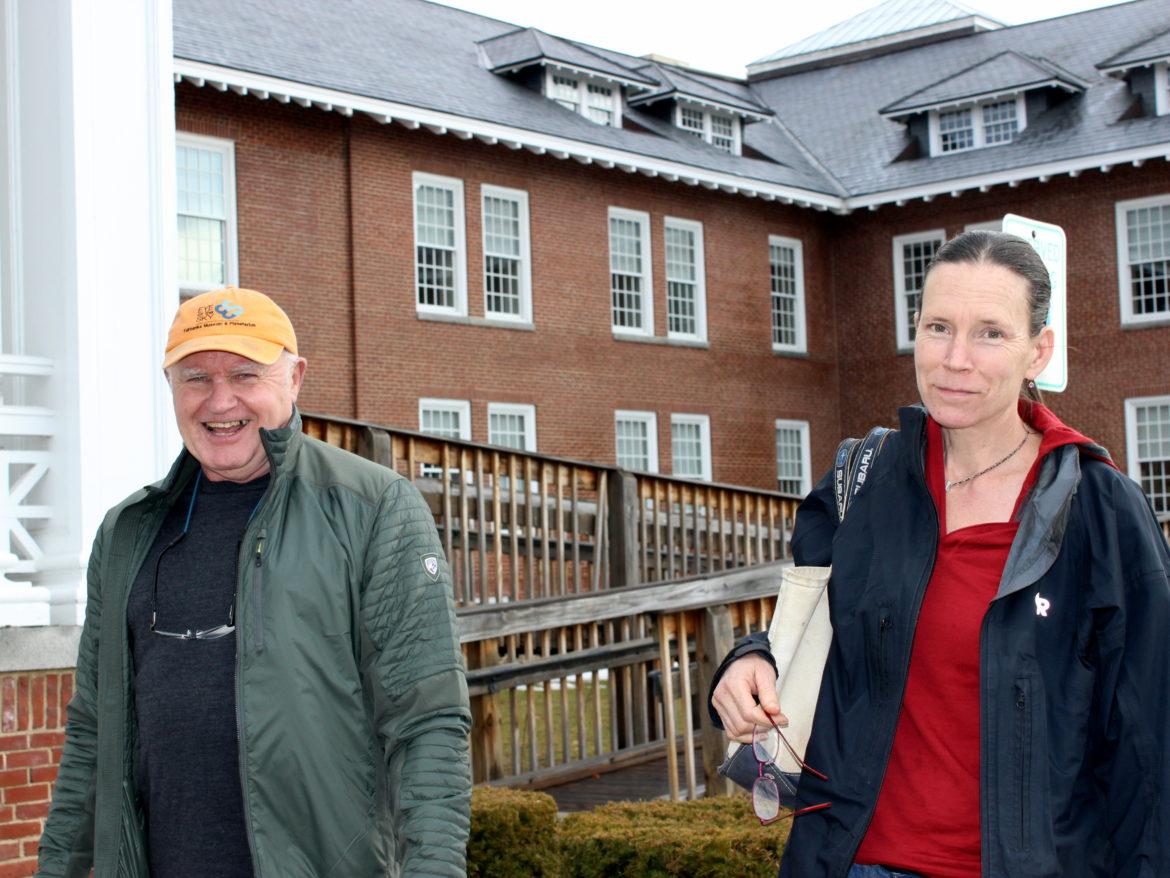 Dr. Campbell McLaren and Kris Pastoriza, who have both spoken out against Northern Pass, arrive at the PUC office in Concord for last week's meeting of the Site Evaluation Committee.

CONCORD – Pittsburg Select Chairman Steve Ellis said he expects 18 towns will try again to clarify what state laws say about the use of municipal roads by utilities.

Their motion asking the state Site Evaluation Committee to clarify the state laws that deal with the issue was dismissed last week. Ellis has written to municipalities around the state seeking support as well.

“We’ll be refiling. I’m pretty sure that will be our intention,” said Ellis in a phone interview on Wednesday.

This time, Ellis expects the motion will be filed in the regular docket of the Site Evaluation Committee subcommittee that is hearing the application of Northern Pass, which plans to build a controversial 192-mile transmission line from Pittsburg to Deerfield. The high-voltage powerline would bring hydropower from Hydro-Quebec to the New England grid.

The towns and advocacy groups are challenging Eversource’s claim that they have the right to appropriate municipal transportation rights of way without approval from the municipal governing authority to build the transmission line within the right of way.

“Towns should not and cannot stand by and allow large out-of-state entities to usurp local control of town roads,” Ellis said in the letter. “As elected officials it is our duty to protect our citizens from any outside entity that arrogantly tries to use us for their own economic benefit and to our detriment.”

On Wednesday, Ellis said it is important to get clarification on the law.

“I don’t think we want to drop this,” Ellis said, adding he is in discussions with other people, including Will Abbott of the Society for the Protection of New Hampshire Forests, to see how best to proceed.

Last week, the SEC voted 7 to 1 to dismiss towns’ petition. The hearings room at the Public Utilities Commission on South Fruit Street in Concord last Thursday was mostly filled with opponents of Northern Pass and lawyers representing Northern Pass.

After the hearing, Jack Savage of the Society for the Protection of New Hampshire Forests issued a statement that said: “The good news is that the towns’ petition has highlighted the issue of local control before the SEC when it comes to town roads and public safety. It’s clear from the discussion among SEC members that they recognize this is an important and contested issue.”

Savage said the committee “could have chosen to address it more comprehensively and helped settle a still very unsettled question: who gets to decide when out-of-state and foreign interests like Eversource and Hydro-Quebec seek to impose their will on New Hampshire communities?”

“The SEC did New Hampshire towns and cities no favor by ducking that larger debate. No doubt towns and cities across the state will be following closely as the issue is revisited as part of the Northern Pass docket,” Savage said.

The Ashland Water and Sewer Department, the Society for the Protection of New Hampshire Forests, and the Appalachian Mountain Club joined the petition as well.

On Wednesday, Northern Pass spokesperson Martin Murray emailed InDepthNH.org saying Eversource will no longer respond to questions from InDepthNH.org. Murray claims InDepthNH.org violated its own ethics policy by assigning a reporter to write a story about the Balsams resort that involved Northern Pass when the reporter’s spouse is a member of a board that is an intervenor opposed to the Northern Pass project.

InDepthNH.org responded to Murray saying there was no ethics violation and its reporters will continue to contact him and the company when it is appropriate to seek their comments.