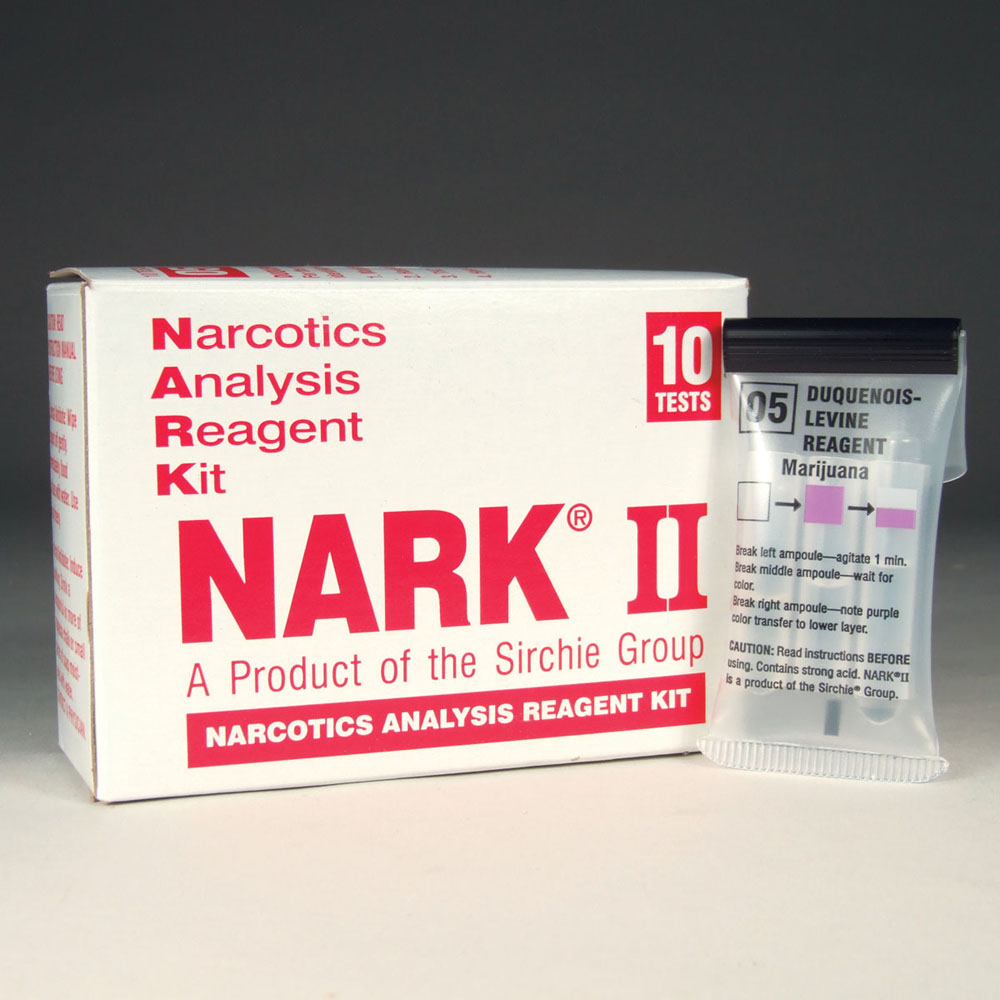 Heroin overdoses killed thousands nationwide last year — some 75 over just three days in Chicago. The central culprit in many of the fatalities was fentanyl, a lethally powerful compound often added to drugs sold on the street. As a result, health officials have called fentanyl a new public menace, and police forces across the U.S. are searching their neighborhoods for the dangerous painkiller.

Sirchie, a leading law enforcement equipment supplier, has found its own way to respond to the crisis. The company now markets an addition to its popular line of drug field tests, NARK II. Police officers use the inexpensive chemical kits to make drug arrests by the thousands every year. The new kits, Sirchie claims, are “designed” so that police can quickly identify fentanyl, and lock up those selling or buying it, potentially rescuing heroin and pain pill users from overdose.

The company has been aggressive in expressing its enthusiasm for the product.

“HOT” is stamped on images of the fentanyl tests found on Sirchie’s website.

“NEW!” Sirchie asserted on the cover of one of its catalogues, which served as a full-page advertisement for the “New Fentanyl Reagent Available Now!” Sirchie described the kit as an “industry first.”

The only problem is that there is nothing new about the fentanyl kit except its name.

Sirchie’s records disclosing the materials contained in its products show the new kits are little more than a repurposed chemical test that has been used to detect all manner of substances for more than a century. There is, then, no special “design” to the product. And the reliability of the tests for the criminal justice system is exactly as it has always been: limited, and prone to error.

ProPublica provided Sirchie with its findings concerning the makeup of the fentanyl kits in writing and asked to interview executives. John Roby, the company’s president, did not dispute the new kits have the same makeup as older ones, but argued in a written statement that Sirchie independently validated that its product can help distinguish fentanyl from other substances. “The point is a new test is not defined by the chemical composition,” Roby said.

During the past year, ProPublica has examined the use and consequences of chemical field tests, a ubiquitous but overlooked law enforcement tool. The tests are small plastic pouches holding glass vials of chemical mixtures. Officers drop a pinch of a suspected drug inside, break the vials, and watch for colors to form in the liquid. Depending on what officers see, the tests can signal the possible presence of outlawed compounds.

Police agencies throughout the country have relied on the swift answers kits provide to justify drug arrests, and file criminal charges, for going on 50 years. For their part, prosecutors often strike plea deals with defendants at their first court hearings, and judges approve them, with only the field test as evidence the drugs are actually drugs. More than 90 percent of criminal convictions in the U.S. come by guilty plea; in drug cases, that rate in certain jurisdictions is greater than 99 percent.

Field tests were never supposed to carry so much weight in deciding guilt and innocence. Their problems were long-established and undisputed. Legal substances can create the same colors as illegal drugs. Officers conducting the tests misinterpret what they see. Contamination skews the results.

As the kits became commercially available in the 1970s, numerous chemists strongly warned against police using them to directly determine whether evidence contained a drug. The tests should be “applied to prove the absence of controlled drugs only,” Michael J. de Faubert Maunder, who worked on drug identification at Britain’s Laboratory of the Government Chemist, wrote in a 1974 scientific journal article.

If police chose to use field tests to help make arrests, the results “should not be used as sole evidence for the identification of a narcotic or drug of abuse” in the courts, chemists at the U.S. National Bureau of Standards wrote the same year. Qualified scientists needed to confirm the field tests for every criminal case.

The U.S. Department of Justice said as early as 1981 that the kits’ shortcomings “cannot be emphasized too strongly.” Judges across the country have blocked field test results from being admitted at trial. However, only a miniscule number of drug cases reach trial, and the kits typically serve as key evidence at preliminary hearings.

In Houston, field tests contributed to more than 300 wrongful convictions the past decade, prompting prosecutors to now require lab analysis before reaching a plea deal. Similarly, in Portland, Oregon, prosecutors this year found five wrongful convictions based on field test results and began requiring that all drug evidence be confirmed by the lab, even after defendants plead guilty.

Despite volumes of scientific literature, and the regular discovery by formal crime labs of errors in field test results, many police officers and prosecutors believe the kits to be highly reliable.

Manufacturers such as Sirchie have contributed to this misplaced faith, and the company’s advertising of the “fentanyl reagent” is only the latest example of what amounts to field test misinformation.

Not that it hasn’t been effective.

Zachary Parke is sales director at Chief Supply, a direct marketer and distributor of public safety equipment for police departments in the U.S. He said the fentanyl test has been selling very well, aided by police officials’ fentanyl fears. “It’s all about how they’re labeling it,” Parke said. His customers, he said, tell him plainly: “That one says fentanyl, so I want that one.”

Field tests involve somewhat complicated science. Some basics, then. The kits are what are known as mobile chemical reactions: the liquid “reagents” combine with the suspected drug and exchange molecules, causing colors to develop in a certain, predictable sequence. But a huge share of the commercial tests sold to police around the country — tests labeled as effective for heroin or for methamphetamine — employ the same basic reagent: a mix that is 96 percent sulfuric acid and 4 percent formaldehyde.

And that’s exactly what is used in Sirchie’s “industry first” fentanyl tests. The only difference, actually, is the 22 percent price markup for the new kit.

Lt. Jeffrey Kazel, a detective at the Duluth Police Department and drug task force commander, said his officers a year ago seized a large amount of suspected heroin that turned out to be pure fentanyl. The department, Kazel concluded, needed a field test to target fentanyl. Kazel decided on Sirchie’s test after spotting it in a catalogue.

Kazel said he didn’t know what to make of the idea that the fentanyl tests weren’t actually different from the company’s other tests.

“I don’t know the chemical compounds in the test kits,” he said.

Fentanyl is an opioid created by a Belgian pharmaceutical firm in 1960 and first prescribed under the name “Sublimaze” as a potent anesthetic during surgical procedures and for patients suffering the severe pain of cancer treatments.

Police started seizing significant amounts of it during street operations a decade ago. The National Forensic Laboratory Information System data shows fentanyl was identified in almost 1,600 samples in 2006. Last year, crime labs reported fentanyl more than 14,000 times, an eight-fold increase. Overdose deaths involving the drug appear to be rocketing as well, though nationwide fatality data is not presently available.

Roby said the company added the test so that officers can quickly find out if a substance might contain fentanyl, and then handle it appropriately. However, earlier this year, the Drug Enforcement Administration warned local police that fentanyl is toxic in tiny doses when breathed in or exposed to skin, and directed officers not to field test suspected heroin.

Parke, the Chief Supply sales director, said departments from all over the nation are buying the Sirchie test and that the other field test manufacturers will likely introduce their own versions.

While the sales pitch and timing seem perfect, the product is not.

Fentanyl produces an orange reaction in the Sirchie kits. But many other substances do, as well — both legal and illegal, according to data on color reactions published in multiple forensic science journals. These include a medicine prescribed to soothe tremors and several antipsychotic drugs. Sugar initially turns orange in the chemical mix used in the fentanyl kits.

Police officers rarely know to be skeptical of manufacturers’ statements, and of the colors they see inside pouches.

Heather Harris, a forensic chemist and former crime lab scientist in San Antonio, is an expert witness for criminal defense lawyers on drug identification and toxicology. Harris said police officers typically have no grasp of the chemistry they’re using with the field tests.

Help Us Investigate: If you have experience with or information about chemical field tests, email Ryan.Gabrielson@propublica.org.