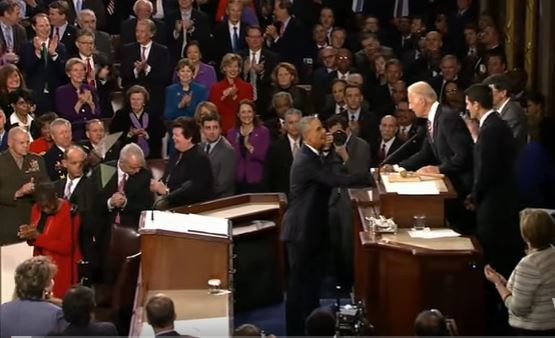 President Obama shakes hands with Vice President Biden before giving State of the Union Address in 2016.

Hillary Clinton looks increasingly likely to win the White House, but her party faces a big obstacle to success in congressional races — Democrats are sorting themselves into geographic clusters where many of their votes have been rendered all but superfluous.

This story was co-published with The New York Times’ Sunday Review.

Even as Hillary Clinton appears poised to win easily against a highly erratic candidate with a campaign in meltdown, a sobering reality awaits Democrats on Nov. 9. It seems likely that they will eke out at most a narrow majority in the Senate, but will fail to pick up the 30 seats they need to reclaim the House. If they do manage to win a Senate majority, it will be exceedingly difficult to hold it past 2018, when 25 of the party’s seats must be defended, compared with eight Republican ones.

The Republican Party may seem in historic disarray, but it will most likely be able to continue to stymie the Democrats’ legislative agenda, perpetuating Washington’s gridlock for years to come.

Liberals have a simple explanation for this state of affairs: Republican-led gerrymandering, which has put Democrats at a disadvantage in the House and in many state legislatures. But this overlooks an even bigger problem for their party. More than ever, Democrats are sorting themselves into geographic clusters where many of their votes have been rendered all but superfluous, especially in elections for the Senate, House and state government.

This has long been a problem for the party, but it has grown worse in recent years. The clustering has economic and demographic roots, but also a basic cultural element: Democrats just don’t want to live where they’d need to live to turn more of the map blue.

Americans’ tendency toward political self-segregation has been underway for a while now — it’s been eight years since Bill Bishop identified the dynamic in “The Big Sort.” This helps explain why red-blue maps of so many states consist of dark-blue islands in the cities surrounded by red exurbs and rural areas, a distribution that is also driven by urban concentrations of racial minorities and by the decades-long shift in allegiance from Democratic to Republican among working-class white voters.

That hyper-concentration of Democratic votes has long hurt the party in the House and state legislatures. In Ohio, for instance, Republicans won 75 percent of the United States House seats in 2012 despite winning only 51 percent of the total votes for the House. That imbalance can be explained partly by Republican gerrymandering. But even if district lines were drawn in rational, nonpartisan ways, a disproportionate share of Democratic votes would still be clustered in urban districts, giving Republicans a larger share of seats than their share of the overall vote. Winning back control of state legislatures in Pennsylvania and Michigan could help Democrats in redistricting in 2020. But it would help more if their voters were not so concentrated in Philadelphia and Pittsburgh, Detroit and Ann Arbor.

“It would be awfully difficult to construct a map that wasn’t leaning Republican,” said the University of Michigan political scientist Jowei Chen. “Geography is just very unfortunate from the perspective of the Democrats.”

More recently, a confluence of several trends has conspired to make the sorting disadvantageous for Democrats on an even broader scale — increasing the party’s difficulties in House races while also affecting Senate elections and, potentially, future races for the presidency.

First, geographic mobility in the United States has become very class-dependent. Once upon a time, lower-income people were willing to pull up stakes and move to places with greater opportunity — think of the people who fled the Dust Bowl for California in the 1930s, or those who took the “Hillbilly Highway” out of Appalachia to work in Midwestern factories, or Southern blacks on the Great Migration. In recent decades, though, internal migration has slowed sharply, and the people who are most likely to move for better opportunities are the highly educated.

Second, higher levels of education are increasingly correlated with voting Democratic. This has been most starkly on display in the 2016 election, as polls suggest that Donald J. Trump may be the first Republican in 60 years to not win a majority of white voters with college degrees, even as he holds his own among white voters without degrees. But the trend of increasing Democratic identification among college graduates, and increasing Republican identification among non-graduates, was underway before Trump arrived on the scene. Today, Democrats hold a 12-point edge in party identification among those with a college degree or more. In 2004, the parties were even on that score.

Finally, in the United States the economic gap between the wealthiest cities and the rest of the country has grown considerably. The internet was supposed to allow wealth to spread out, since we could be connected anywhere — but the opposite has happened. Per capita income in the District of Columbia has gone from 29 percent above the United States average in 1980 to 68 percent in 2013; in the Bay Area, from 50 percent above to 88 percent; in New York City, from 80 percent above to 172 percent. Cities like New York, San Francisco, Seattle and Boston, exert a strong pull on mobile, highly educated, Democratic-leaning voters, while at the same time stirring resentment in the less prosperous areas those voters leave behind. And these economically dominant cities tend to be in deep-blue states.

How extreme is Democratic clustering? If you compare President Obama’s 2012 performance with Al Gore’s in 2000, you can see a huge increase in the Democratic percentage of the vote in the 68 largest metro areas. But it barely budged everywhere else. Some of that increase was caused by voters already in those cities flipping from Republican to Democratic. But it was also the gravitational effect.

This clustering of Democrats helps explain why Trump has been keeping it close in Ohio and Iowa, both states where some 72 percent of white residents over 24 lack college degrees, the highest share among the 13 most competitive states.

It works the other way in presidential elections, too. Democrats have gained in some other swing states with high levels of college-educated voters, like Virginia and Colorado, and they do at least reap a benefit in the Electoral College for having a lock on big states such as New York and California.

Clustering is part of the problem. All those Democrats gravitating to blue strongholds like New York and California get the party no more Senate seats than Republicans get from Idaho and from Wyoming, a state with a population of about 580,000, slightly more than Fresno, Calif. If the Democrats are going to gain a lasting hold on the Senate, they have to win seats in swing states. But that gets harder the more that Democratic-leaning voters flock to big, blue states, abandoning swing states like Ohio, where the Republican Rob Portman is gliding to re-election, or smaller red states where Democrats might still have a shot at holding Senate seats, like Montana, Indiana or North Dakota.

Jenn Topper has thought about this dynamic a lot, because she’s a clear example of it. Topper, 31, grew up in Beavercreek, Ohio, a suburb of Dayton, a city that has lost nearly half its population since 1960. She left for college at Florida State, then for a public relations job in New York, then for a political communications job in Washington.

“When you grow up in Ohio, there’s a bigger world out there, and if you know about it, you just want to go to it,” she said.

A couple years ago, Topper and some colleagues who were also from Ohio were excited to meet “their” Democratic senator, Sherrod Brown, at an event. He asked them where they lived in Ohio. But they don’t live in Ohio — and won’t be able to vote for him in what is sure to be a tough race in 2018.

Topper’s high school classmate Brett Stelter, 31, left Dayton after attending Ohio University. His father was a district parts manager for Honda, which has a plant near Dayton, and Stelter himself did part-time work at the plant. But his dream was to be an actor, and so he ended up in Los Angeles.

“There’s just nothing to do in Ohio,” he said. “The jobs are limited, but it’s not just the jobs and the industries that are in Ohio, it’s the mind-set that I didn’t gravitate to.”

Stelter, who voted twice for Obama, is disappointed that his vote is superfluous in California, and tries to make up for it by engaging on social media with people back home — people like his father, who is leaning toward Trump. “Part of me wishes I could be there to personally talk to people instead of trolling them on the internet,” he said. But his political irrelevance is not enough to make him consider moving back. “Going back to Ohio to be able to vote every four years is not enough for me.”

This clustering is happening even as many smaller cities and outlying regions are experiencing mini-cultural renaissances. For one thing, a foodie or beer snob now has much less to complain about when contemplating dining outside a big coastal city. And most of these places are much more affordable than Brooklyn or Los Angeles. But they can’t seem to compare with the profusion of cool elsewhere.

Even cities making comebacks, with restored downtown buildings and plenty of locally brewed I.P.A., have the memory problem. If a city was on the ropes when young people left it, it’s frozen in that form in their image of it. “You’re competing with memory,” Topper said. “People look back and remember what it was like when they were there. You don’t often hear about how things are moving or growing or new things are happening. That picture of when you have left is all you have.”

Of course, some people do go back. Brittney Vosters, 30, who went to high school and college in Dayton, left for several years, living in Chicago and enrolling in graduate school in public administration at Rutgers in New Jersey. She recently moved back to Cincinnati so her husband could go to graduate school in northern Kentucky. It has struck her how much her former Dayton classmates have sorted out politically. “It’s noticeable that the people who left are more liberal-minded and the people who stayed are more Republican,” she said.

And this sorting out is self-perpetuating, too. The fewer people you encounter of the opposite political persuasion, the more they become an unfathomable other, easily caricatured and impossible to find even occasional common ground with. By segregating themselves in narrow slices of the country, Democrats have also made it harder to make their own case. They are forever preaching to the converted, while their social distance also leaves them unprepared for what’s coming from the other end of the spectrum. Changing that would mean adopting a broader notion of what it means to live in a happening place, and also exposing themselves to discomforts that most people naturally avoid, given the human tendency to seek out our own kind.

Vosters, for one, appreciates that her vote counts a lot more now in Ohio than it did when she was in New Jersey and Illinois. But she has no doubt where she’d like to end up for good. For her next move, she said, “I’d look at the political map and go toward the blue, because it’s more comfortable to be around people who are like you.”

Read the story behind the Great Republican Crack-Up of 2016 and more of ProPublica’s coverage of politics in our ongoing series, The Breakdown.