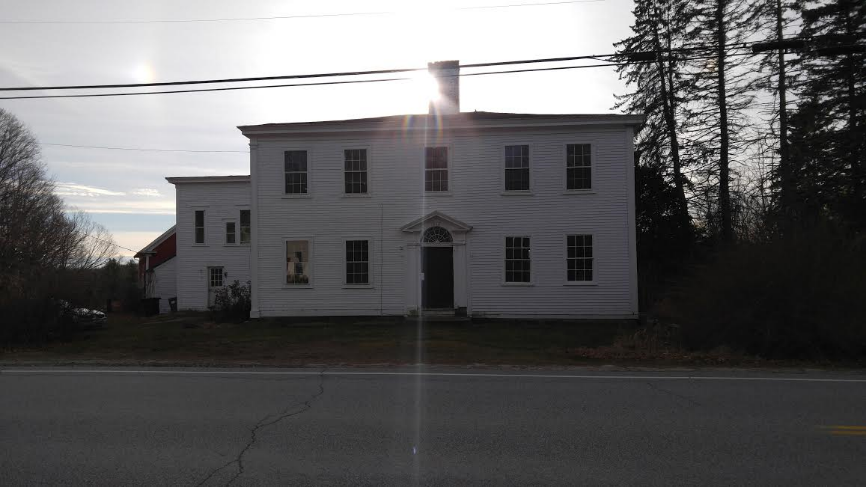 It was late fall and the full moon was shining through the window illuminating my bedroom in Salisbury.

I woke up in the middle of the night and couldn’t believe what I was witnessing. I saw two small figures floating several feet away from the foot of my bed.

I freaked. I was trapped. I pulled the blanket covers up over my head. My heart was racing. I so wanted to believe that it was all just a dream. Still under the covers, I rolled over, faced the wall and tightly closed my eyes. “It’s just a dream,” I kept chanting softly to myself over and over.

I could still see them in my head even with my eyes closed.  I waited. I waited some more and shivered a bit even though I was sweating by now under so many covers.

I finally peeked out over the covers to see if the two figures were still there. They were.

I stared in shock as my nightmares had obviously come to life. I contemplated my options.

I could stay in bed and wait until morning, or I could run into my parent’s room on the other side of the house and tell them about the monsters that lived in our house. I chose the latter.

I hesitated a moment before making my move. The figures, no bigger than small children, just hovered seemingly in no rush to go anywhere.

I threw the blankets off of me, surprising myself, leaped out of bed, and hurdled to the door.

As I passed each figure, I felt a cold touch of air caress my skin. I thought I heard one call me by my family nickname. “Dewey, Dewey. ..”  I grabbed the door handle. It was stuck. I shook it. The door would not open; it was locked.

I twisted my head around and glanced at the two figures behind me. They were clearly little girls I could now see, just floating in place as I pounded on the door, desperate to get out. They did not have detailed faces or bodies, but they hovered and swayed as if learning a slow dance, these two floating white orbs.  I finally unlocked the latch that kept it shut, threw the door open, and ran.

I sprinted down the long hallway that led to the master bedroom, yelling, “Mom, Dad!” They both groaned as they gradually awoke, clearly unhappy with the disturbance. “What is it Dewey?” my father asked.

“There’s a ghost in my room!” I shouted.

I tried to further explain the paranormal encounter I had just experienced at the age of six, but what came out of my mouth sounded like gibberish even to me.

I walked slowly alone back across the house to my room, scared about what I would find. The door was still open. I peered into the room. It was dark and silent.

The figures were gone and I stared in horror. Where had they gone? Why were they there? Questions boggled my mind, questions that I could not answer.

I think back to that night now and recall how surreal it all was. I know that it was not a dream or a figment of my imagination. I know this because I was not the only person to see floating figures or strange little kids floating in that room.

That is what makes it so horrific, the fact that I was not the sole witness of whatever it may have been. More than one house guest who later stayed in that room told us they heard little girls laughing while they were on the edge of sleep.

When I was a bit older and dared to venture into the graveyard next door one Halloween – on a night not unlike this one – I found the tombstones of two little children who had once lived in the house more than two hundred years ago. Two little sisters. I still wonder today what had happened to them. The stone didn’t say. Their stories were never told. Why, why I wondered did they not rest in peace? And who will tell their stories?