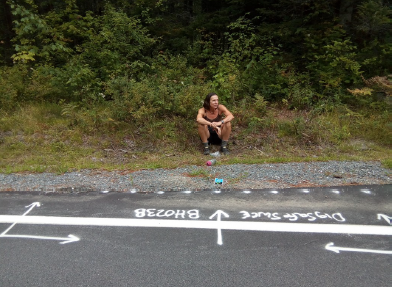 Kris Pastoriza is pictured engaging in what she calls passive resistance to protest Northern Pass by blocking the area where workers were planning to drill a bore hole in Easton. She was arrested soon after on Aug. 10 and charged with disorderly conduct and trespassing, pleaded guilty and was fined.

An opponent of  Northern Pass has been arrested for what she calls an act of passive resistance against the proposed hydro-electric transmission project, which is also facing pressure to provide more complete data responses to intervenors.

Some critics don’t see how it is possible to start scheduled technical sessions in a few weeks, let alone have the state Site Evaluation Committee make a final decision by next September. Some intervenors say far more detailed information is required from Northern Pass to stay on schedule in the complex legal process of siting such a project, as do two state agencies.

Eight days ago, Kris Pastoriza was charged with trespassing and disorderly conduct for trying to stop a Northern Pass subcontractor from drilling a bore hole near the Ham Branch River on Route 116 in Easton. Pastoriza said she sat on the ground where the crew planned to work and refused to leave, then was arrested about an hour later.

“I really didn’t want boring fluids dumped there, and worry what effect the 60′ drill hole will have on the river and groundwater,” said Pastoriza, an outspoken opponent of the project. Her court date is in mid-October.

Pastoriza is a member of the Easton Conservation Commission, which is an intervenor in the project. Pastoriza described information received from Northern Pass as “inadequate and evasive and obstructive.”

The state Department of Environmental Services and the Department of Transportation both recently asked for more time beyond the Aug. 15 deadline to make their final reports. They say they need it because they are still receiving data from the applicants, much of it very complex.

On Wednesday, Site Evaluation Committee administrator Pam Monroe said her office was busy posting a flurry of intervenor filings on the SEC website. Thirteen intervenors out of about two dozen have filed motions to compel Northern Pass to fully respond to their data requests, Monroe said.

That means they weren’t satisfied with the data Northern Pass delivered on each of their original requests, Monroe said.

“The motions to compel relative to data, those will be ruled on,” Monroe said, as will be the requests for more time from the two state agencies.

Asked why the state agencies were both still seeking information even though they previously signed off on Northern Pass’ application as complete, Monroe said the initial approval was an administrative one. That review looks at whether all of the right forms and initial information were filed, with this more detailed review conducted later in the process, she said.

Northern Pass and Eversource Energy need the approval of the state Site Evaluation Committee, along with federal approvals, to bring hydro-electric power from Canada to New England markets via a 192-mile transmission line from Pittsburg to Deerfield. It was originally scheduled to make a final decision by December, but has already ordered that decision be pushed ahead from December to Sept. 30, 2017.

Northern Pass spokesman Martin Murray said under the permit review schedule, the state agencies, including DOT and the DES, had a statutory obligation to make certain filings by Aug. 15. That’s why they are now asking for more time.

“The necessity for this additional time was anticipated by the SEC when it extended its review process to September, 2017; thus, we do not expect that end date to be impacted by this request,” Murray said in an email response to questions.

Murray said the project has already provided an extensive amount of information and expert testimony during this SEC review process. That includes its 28,000-page application filed in October 2015, a supplement to the application filed in February 2016, and responses to about 1,200 data requests from parties in the proceeding, including providing almost 80,000 pages of additional material to those parties, Murray said.

Kenneth D. Kimball, director of research at the Appalachian Mountain Club, said by this time in the process, state agencies and intervenors shouldn’t be scrambling to get more information from the applicant.

The technical sessions that are scheduled to start on Sept. 6 are designed to essentially sort out the final details before the case goes to the deliberating body for a final decision.

“This just adds to the obvious question of how can the SEC process continue to move ahead based on the current SEC posted schedule.

“With towns, DES and now NH DOT filing that needed substantive information which should have been in the application is still missing, along with NGO’s and others, it raises the fundamental question – is this application before the SEC still complete and how can the technical sessions scheduled for September properly  move ahead based on partial information?” Kimball said.

In one of the motions to compel, Grafton County Attorney Lara Saffo said the project’s responses to data requests were incomplete for a number of reasons.

The responses do not identify the individuals who provided the information, don’t include internal communications relative to the data requests, and many are in formats that require buying costly software to read, Saffo wrote.

Gov. Maggie Hassan’s spokesman William Hinkle said the DES and DOT accepted Northern Pass’ application based on a preliminary review. That doesn’t “mean that additional information is not needed as the permitting review process continues or that additional time will not be needed for a more complete review, especially with a complex application such as this,” Hinkle said.

“The SEC has already extended the deadline for this project once, and the governor is confident that they will do so again if an extension is necessary to ensure a thorough review,” Hinkle said.