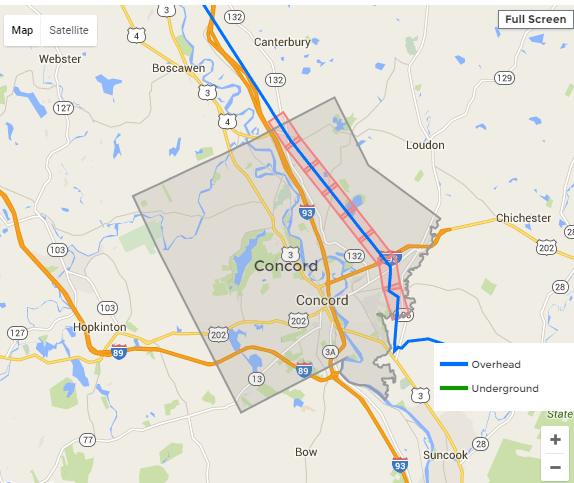 Northern Pass maps detailing project route for Concord and all of the municipalities along the proposed route.

The city of Concord is appealing to the state Supreme Court seeking to go it alone as an intervenor in the Northern Pass project that is pending before a state Site Evaluation Subcommittee.

Concord’s appeal says it is uniquely affected by the 192-mile proposed transmission line from Pittsburg to Deerfield and shouldn’t be forced to partner with other communities and share a single spokesperson in the complex siting process.

Many communities in the North Country have voiced similar objections for the same reason. The forced grouping, they argue, is at odds with what the legislature intended when it ordered the reorganization of the SEC to make it easier for public participation.

If Concord prevails, it could help the towns with identical concerns.

Concord’s appeal quotes a 2012 Appalachian Mountain Club study that found Concord experiences the highest exposure with at least one tower being visible from more than 9,000 acres.

Each municipality in the group is mainly concerned about how the project impacts within its own borders, according to the appeal filed by Deputy City Solicitor Danielle Pacik on Friday.

There were so many intervenors originally that they were divided into groupings to streamline the process. There are now about two dozen groupings, including municipalities, abutters, businesses and advocacy groups.

Concord’s appeal focuses on whether the evaluation subcommittee’s decision was “unlawful and unreasonable.”

“The manner in which Concord has been grouped with other municipalities violates the requirements under RSA 541-A:32, IV and Site Rule 202.11(e) which provide that to the extent that a presiding officer imposes conditions on intervention, such conditions shall not be ‘so extensive as to prevent the intervenor from protecting the interest which formed the basis of the intervention,’” Pacik wrote.

The appeal said the grouping requirements “will prevent Concord from a fair and adequate opportunity to respond to issues in a way that fully protects the city of Concord’s procedural due process interests.”

The joint application before the evaluation subcommittee, filed by Northern Pass Transmission, LLC and Eversource Energy, is seeking a certificate of site and facility to build a high-voltage transmission line. It would bring 1,090 megawatts of energy from Hydro-Québec’s hydroelectric plants in Canada to New Hampshire then on to New England.

Concord has about 42,695 people, 36 percent of the entire population along the proposed route with 8.1 miles of overhead transmission lines, Pacik said. Only Dixville, Franklin, Whitefield and Stark would have more overhead line, she wrote.

The average height of the relocated structures would be 88 feet, twice the most common height at 43 feet of existing poles in Concord, the appeal states.

“The application shows 120 structures are over 90 feet in Concord, and 60 of those structures are proposed to be between 100 to 125 feet,” Pacik wrote. The route, according to the appeal, runs through residential, commercial and industrial zones in the state’s capital, including near 148 condominiums at McKenna’s Purchase.

The Site Evaluation Subcommittee released its written order confirming that it had denied Concord’s motion to reconsider its request to be sole intervenor the day before Pacik filed the Supreme Court appeal.

The subcommittee order referred to its May 20 order that said all intervenor groupings should try in good faith to reach decisions. But if that is impossible, the individual intervenor can file a motion explaining the disagreement and seek alternative relief.

The evaluation subcommittee also said that Northern Pass opposed Concord’s reconsideration request because the city failed to state any new facts that would warrant a rehearing.

“The Subcommittee determined that Concord failed to provide any error of fact, reasoning, or law that would warrant rehearing of the order,” the subcommittee’s July 21 order said.

Concord’s is the first appeal to the Supreme Court of a Site Evaluation Subcommittee decision in the Northern Pass project.

The Society for the Protection of New Hampshire Forests has filed a notice of appeal to the state Supreme Court, but that case is appealing a Superior Court ruling.

Northern Pass also proposes the construction of structures at Turtletown Pond. In that case, the Department of Energy says the aesthetic/visual impact will increase from “moderate” to “strong,” Pacik wrote.

The appeal also points out that similar to the Society for the Protection of New Hampshire Forests, which is a full party in the proceedings, Concord has a direct ownership interest in some of the affected properties.

Pacik asked the court to accept the appeal, order both sides to submit briefs and schedule oral arguments.

Starting tomorrow, the attorney who represents the public in Northern Pass proceedings is holding workshops to help experts identify local resources in communities within 10 miles of the proposed route. The meetings will be in Ashland on Tuesday, July 26; Concord on Thursday, July 28; Littleton on Aug. 1, Colebrook on Aug. 2  and Lancaster on Aug. 3.  Find here: Information on which communities will gather at each meeting.