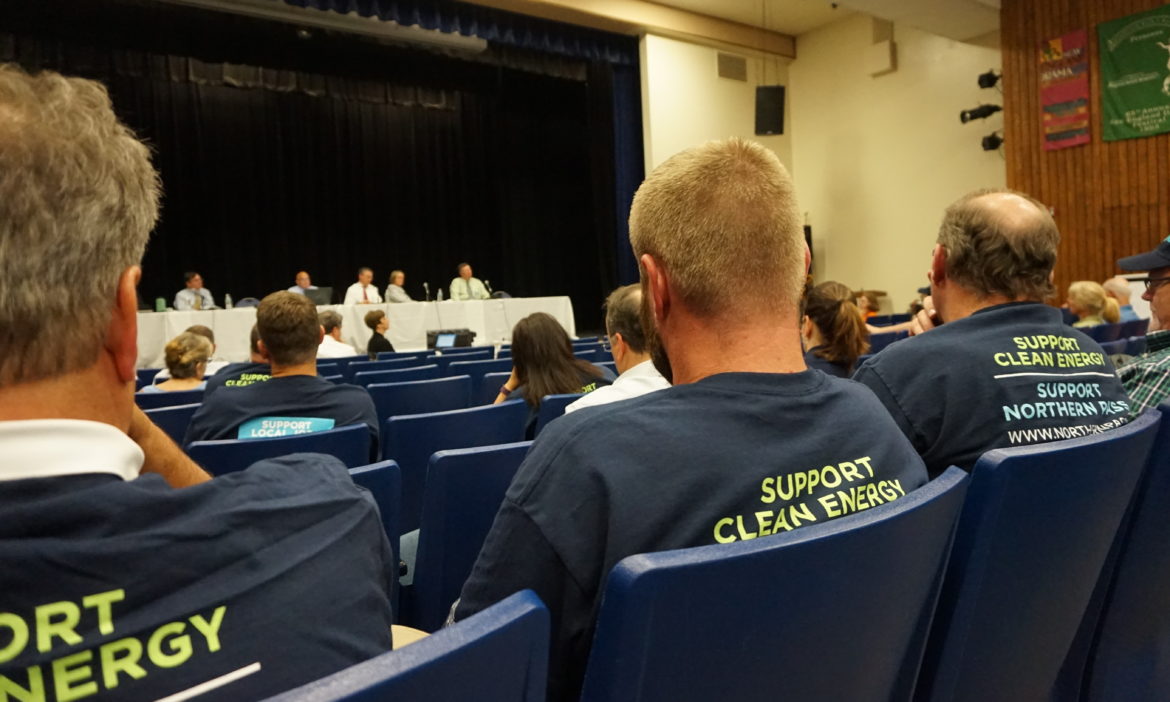 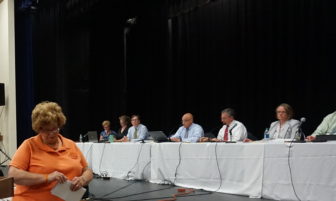 The last public comment hearing on Northern Pass drew about 125 people to Plymouth Regional High School Thursday night with many wearing their true colors – orange shirts for those opposed to the project and navy blue “Got Hydro?” shirts for supporters.

The applause after each speaker followed the orange/blue split as the state Site Evaluation Subcommittee listened to both sides and held a brief meeting afterward.

Wearing orange, Grafton County Commissioner Martha Richards said there would be chaos in a number of downtowns that would undoubtedly cause some businesses to fail if the project is approved as is.

“Here I stand before you again tonight with a simple message that Eversource is loathe to keep hearing: Bury the whole project under I-93 and other state transportation corridors,” Richards said.

Eversource’s Northern Pass isn’t dealing with a bunch of “backwoods hicks,” she said.

“(They) couldn’t even buy off Plymouth with $10 million to move the line,” Richards said. “We the opposition can tell you: it is not needed and not wanted.”

Back of the Got Hydro? shirts tout Northern Pass’ message.

The Site Evaluation Subcommittee is made up of state department heads and two public members. By law, the SEC reviews, approves, monitors and enforces compliance in the planning, siting, construction and operation of energy facilities.

Northern Pass would bring 1,090 megawatts of electricity from Hydro-Québec’s hydroelectric plants in Canada and run 192 miles from Pittsburg to Deerfield then to the rest of New England.

Rep. Herbert Richardson, R-Lancaster, said: “I am here to tell the SEC that I have many local contractors in my district and county that are very happy with the project.

“They feel Northern Pass is making a concerted effort to hire local contractors as part of this project,” Richardson said.

The $200 million Forward NH fund is very important to Coos County and the state of New Hampshire, he said. “The small amount of these dollars that have already been given out are helping in my district.” He mentioned the fund’s financing of an electric car charging station and a local child-care center.

“The newest project to get started will be new street lighting in Lancaster,” Richardson said.

“Coos County is hurting. Will Northern Pass and the Forward NH fund help bring jobs to the North Country? I believe they will. We need help. We need jobs,” Richardson said.

Rep. Suzanne Smith, D-Hebron, said if Northern Pass had initially proposed burying the entire project, it would in all likelihood now be built.

“But instead after millions of dollars have been spent trying to work the system and now six years into the project, the adjudicatory process is not even started,” Smith said.

“I urge the SEC to seriously listen to the people and recommend burial of the entire project,” Smith said.

“It is very important to the growth and viability of my company and our employees that this project be approved,” Bouthillier said. He wasn’t happy that the evaluation subcommittee recently voted to extend the deadline to make its decision on the project for nine months.

“Fundamentally, it is important for you to stop delaying the work so that we can go to work,” Bouthillier told evaluation subcommittee members.

Roger Hines of Bethlehem brought a black replica of the proposed towers to the podium that he has also taken to other Northern Pass hearings.

He spoke about jobs. “Construction itself is going to be the bulk of the work. When the job is done, 90 percent of the jobs will be gone,” Hines said. 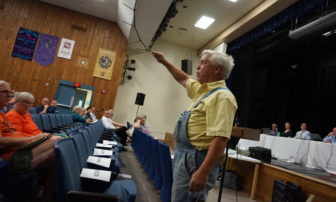 James Page of Deerfield displays some wire and stakes he says were left behind by the project in pre-construction work.

James Page of Deerfield brought a wooden stake and heavy wire rod in a white bucket. He said he found it in Deerfield, part of the project’s pre-construction work.

“How would you like your child or animals to go out and get tangled up in this?” Page said, showing the length of wire to the audience and evaluation subcommittee.

Page, who described himself as an OSHA outreach safety trainer, said: “You can judge how a project will be carried out by how its early work will be done.”

“If he is making a claim that we are doing something wrong, he should be bringing it to the attention of the PUC or the proper authority,” Murray said.

A petition signed by 85 businesses that employ 5,000 employees was submitted during the hearing calling on Eversource and Hydro-Quebec to bury Northern Pass along highways and to explore the use of I-93 for that purpose.

“Do not let this project scar the beautiful scenery and landscape we enjoy, and that should be there for future generations to enjoy as well when there are sensible alternatives,” the petition said. 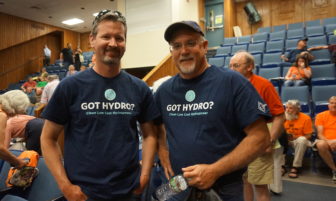 Marc St. Cyr, an Eversource supervisor wearing a blue Got Hydro? shirt, said: “We believe in the project. We think it’s going to be good for New Hampshire.”

St. Cyr said some of the people wearing the shirts were Eversource employees, but not all. Some were tree contractors and business owners, he said.

Jon Wilkinson of Lancaster wore an orange shirt in protest of Northern Pass as it is proposed. “It isn’t anything to do with electricity. It’s all about money,” Wilkinson said.

Lakes said 10,000 caribou drowned in 1984 trying to cross a Hydro-Quebec-damned river. “So why is Quebec willing to rip out its heart and soul — the very essence that makes Canada Canada? Yes, it’s for money, but it is so much bigger than that,” Lakes said.

He believes the money is to help Quebec become financially self-sufficient so it can become its own sovereign state. “And we are a pawn in this game,” Lakes said.