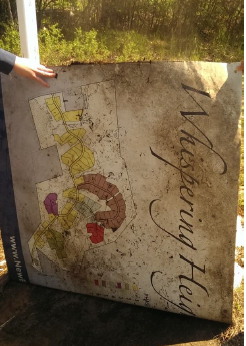 Photo of an old sign found on the ground of Whispering Heights development that was abandoned several years ago in Concord. 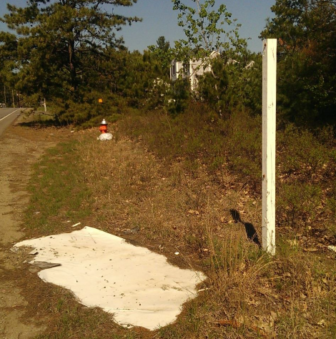 The sign for Whispering Heights was found on the ground by a Concord city employee. (City of Concord photo)

The city of Concord has filed corrections to information Northern Pass provided to the Site Evaluation Committee stating that a residential development is being built on the north side of Portsmouth Street when the project was in fact abandoned several years ago.

Northern Pass filed DeWan’s statements on May 10 in response to questions the evaluation committee posed to him during site tours in March. Pacik filed Concord’s response on Monday.

“I would say the city is concerned about the lack of due diligence that was performed by the applicant’s aesthetics expert,” Pacik said.

Pacik’s correction referenced answers DeWan gave to the evaluation committee to two questions about the East Sugar Ball Road Trail and construction occurring on the north side of Portsmouth Street.

“In response to both of those questions, Mr. DeWan incorrectly stated that there is a residential development called ‘Whispering Heights’ that is being developed on a 271.5-acre parcel.

“Mr. DeWan incorrectly assumed this information based on a sign on Portsmouth Street, which he claims states that ‘an 87-lot cluster development entitled Whispering Heights will be built on a 271.5-acre parcel on the north side of Portsmouth Street,’” Pacik wrote.

There is no residential development currently proposed there, although there was a proposal several years ago, Pacik said. And during a recent inspection by Concord’s senior planner, the only sign located in the area was “an overturned and decayed sign located on the ground near Portsmouth Street.”

Eversource spokesman Martin Murray said Northern Pass’ response to Pacik’s corrections would be made in an official filing to the Site Evaluation Committee.

The evaluation committee will decide whether Eversource can build the $1.6 billion project. The 192-mile transmission line would bring hyrdropower from Hyrdro-Quebec to Pittsburg to Deerfield, then on to the New England grid.

There was a proposal for a Whispering Heights residential subdivision project, but the developers abandoned it several years ago, Pacik wrote. The city of Concord bought the 270-acre property in 2013 for $1,025,000 to help protect it, she said. About 91.1 acres of the land has been put into a conservation easement held by the New Hampshire Department of Environmental Services.

The current construction activity and clearing viewed near Portsmouth Street during the site inspection that DeWan said was a residential subdivision is related to the construction of two Unitil substations, Pacik wrote.

The city of Concord conveyed 45.2 acres in 2015 to Unitil for the construction of two substations. “It should be noted that the transmission substation needed for this reliability project is owned and being constructed by Eversource,” Pacik wrote.

“Mr. DeWan’s statement that the construction activity is for a residential subdivision is incorrect, and it is concerning that he is unaware that Eversource is actively involved in the construction project,” she wrote.

The substations are needed by Unitil to ensure that it can deliver reliable energy to the Concord area, Pacik said. Their location was chosen because Concord’s Conservation Commission determined they would have the least visual impact in the area because of surrounding tree buffers.

“Mr. DeWan’s assumptions relative to the Sugar Ball Road trail assessment are also incorrect,” Pacik wrote. The trail is currently utilized and will be more heavily utilized in the future to connect the southern neighborhoods to three miles of new trails that are being constructed at Broken Ground.

“Finally, with respect to the tree buffer between the right of way corridor and neighboring homes, Mr. DeWan incorrectly states that the city of Concord owns the land upon which the trees are situated. To the contrary, that parcel of land was conveyed to Unitil as part of the land transaction,” Pacik wrote.

Unitil has committed to not disturb the tree buffer as long as it has access to the substations, but there is a concern that some of the trees may be removed to the extent they are located within the transmission line easement corridor owned by Public Service of New Hampshire, doing business as Eversource, Pacik wrote.

The Northern Pass filing also included responses to questions posed to DeWan from the evaluation committee about areas in Bridgewater, Bethlehem and Stark.