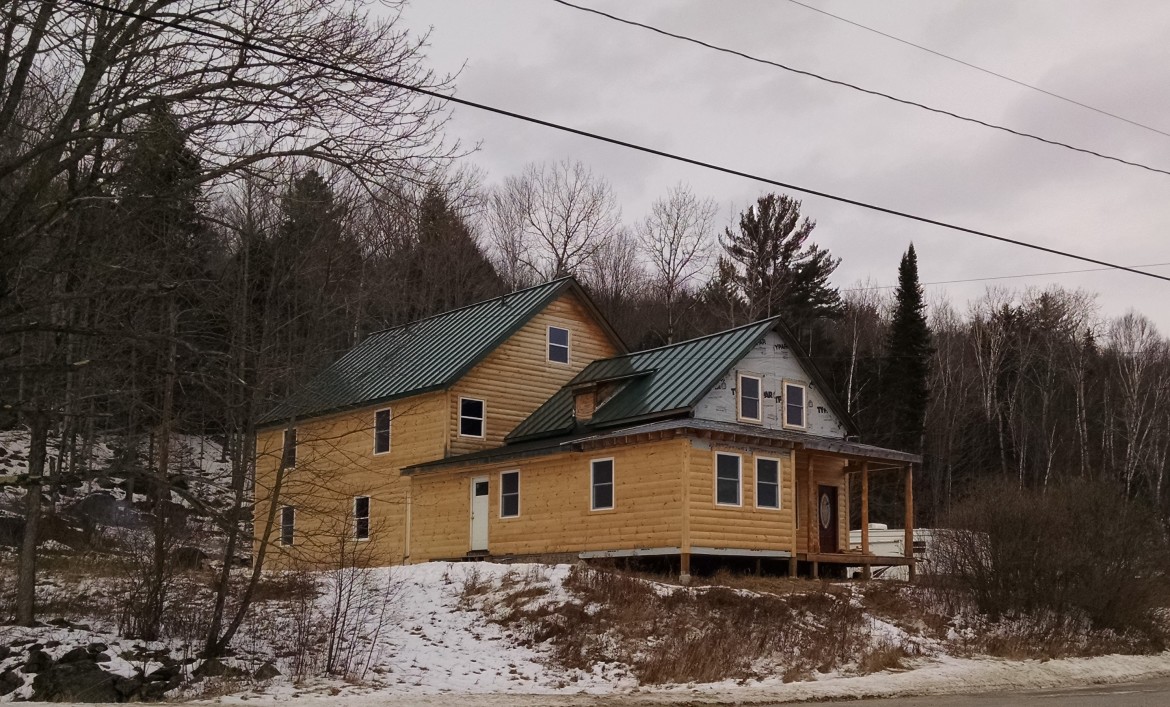 Photos of Percy Lodge in Stark, which is still in the process of being completed. The photo shows the Long Mountain view. Northern Pass towers would be seen in this same shot if it is built.

In  May of 2012, my husband Kevin and his business partner purchased a 26-acre property in Stark with future plans to re-develop an existing house that was built in the late 1900s  into  a lodge and campground for tenting and RV’s. We never expected this purchase would be negatively affected by the proposed Northern Pass project.

In June of 2013, we received the first of the mailings from the Northern Pass Transmission, LLC, in Manchester. Surprise, surprise, when The Berlin Reporter’s, issue, dated July 13, 2013, ran a front-page article NORTHERN PASS ANNOUNCES NEW 40-MILE NORTHERN ROUTE. This article by Edith Tucker said, ”The proposed new route does not go through the towns of Colebrook, Columbia, or Stratford, as did the original proposal.

“The new route is designed to take into account the public’s desire to keep transmission towers out of sight as much as possible, explained Long, who pointed out that New Hampshire is noted for its active citizens who eagerly debate issues in an effort to find common ground.”

Reading this article was a complete surprise, and I can’t express enough how very uninformed we were of this besides what we read or heard. The Society for the Protection of New Hampshire Forests sent the first information regarding the Northern Pass 180-mile power line with towers 90 to 135 feet high to be erected through the heart of New Hampshire.

In September of 2013, Kevin and I attended one of the many public meetings, this one was at the Stark Fire Station. At this meeting we filled out a comment form, which generated an email from Sarah Demers of Burns & McDonnell, Community Relations Specialist. In this email, she informed us that a meeting can be agreed to, to review the project in more detail and perform a site visit and walk the existing easement on our property.

Not until September of 2014 did we receive another letter, this time from Jerry P. Fortier, Project Director, Northern Pass Project, informing us that a member of his team would be contacting us soon for a one-on-one meeting, for any specific questions or concerns with our “right of way.”

In September 2015, I wrote my letter to Department of Energy in Washington, D.C. Over the next months and into 2016, letters have been written and sent expressing our concerns over the negative impact these towers will have on our Percy Lodge property. Across from the 26 acres, where the lodge is being built, we have 72 acres, which is being developed into tenting areas and RV parking.

The 72 acres now has a scenic view of Percy Peaks and Long Mountain. The present PSNH easement power lines are below the tree line. If PSNH (Eversource) is given the required Presidential Permit to start this project, these steel towers will be seen completely across this beautiful scenic view. In  January, Kevin and his business partner had their one-on-one meeting with the SEC at the Percy Lodge property. At this meeting we were given more articles on the Northern Pass Project along with a map showing the placement of the new power lines.

This map shows that not one new power line is being installed, but two, one being the steel towers at 85-155 feet. At this meeting, both Kevin and his partner were really told what the SEC wanted them to hear, not really addressing any of the issues they were concerned with about the negative impact on the property value and view in the town of Stark.

We are now being represented by legal counsel, spending money on defending our property rights, money that we should be spending on the development of Percy Lodge, which will bring in much needed commerce in tourism, with the OHRV & ATV Trail from Groveton to Milan, canoeing along the Upper Ammonoosuc River, with the 72 acres for tenting and RV parking, boarders and snowmobiling in the winter, which the Great Northern Woods has and should be forever protected. 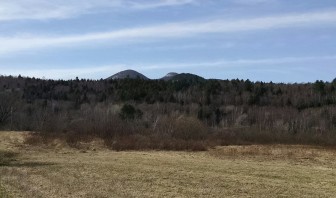 The picture at right is taken from the 72 acres, with Percy Peaks and Long Mountain in the background. If you look at this picture you can see a darker area just below the mountain scene, this darker line across this picture is where the existing PSNH easement is. If Northern Pass is allowed, this whole scenic view will have the steel towers, instead of the beautiful landscape we in Coos County now enjoy.