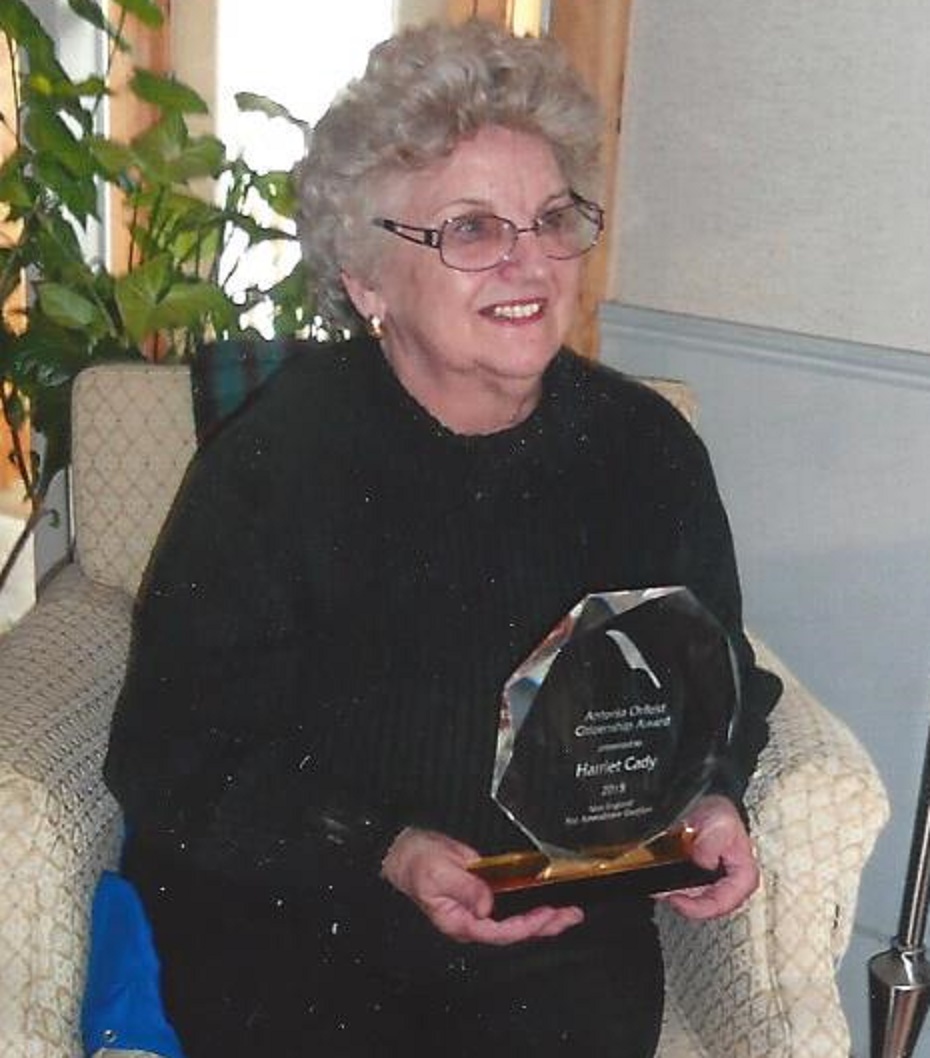 Harriet Cady of Deerfield. She is pictured with the an award she won in 2015 from the New England First Amendment Coalition for her work on government transparency.

As a person who has always wondered why we let our New England hydro dams disintegrate, I want hydro energy for our country whenever possible.

As a child who grew up the lucky recipient of hydro dams built during the depression by the CCC for my community, little did I know all the background, yet I knew we had a lake us kids played, boated and swam in.  I, the everlasting tomboy that no boy cousin or two-year older uncle would ever beat, walked the hydro dam across and back to prove how I wasn’t afraid and perhaps how stupid a stunt it was.

How I loved fishing for perch in the falls of the dam and lake.  How I loved the swimming on those hot days.  Yet, I never realized what a savings it was to the families in my community.

Looking back, I remember as a teenager light bills for three months of $36 in a house with three adults and seven children.  All because we used the power of water to get electricity for our town.  Some very wise people planned for the community that attracted the granite industries, the many businesses that needed that power.

At some point, the town’s electric department decided to use oil to power the generators rather than depend on water because oil was 10 cents a gallon, but someone didn’t look ahead and now electricity in my community costs much more, which in my opinion was very poor planning.

We have people who say little of what comes through our state is for our state, sounds like the “NIMBYS” (not in my backyard) but New Hampshire, like all the states serviced, will benefit because the grid that the electricity goes to serves all of New England, including New Hampshire.  Then there are the taxes that will be paid to our state for all the poles and lines above ground, nothing for buried lines.  Those taxes in a large part pay for educational costs in New Hampshire as well as the very expensive Health and Human Services Agency.

The inexpensive production of hydro will also hopefully keep industries in our state and bring more to it, thus producing business profits taxes, which will support our state government and local communities with property taxes.  My community of Deerfield will receive between $750,000 and $1.4 million in the town’s coffers while affecting 80 families along those rights-of-way.  Those 80 families presently live along, abut or are close to the present powerlines so nothing changes except maybe a few poles higher than present. The extra five towers over 100 feet will be in present powerline’s rights-of-ways where we already look at powerlines.

But let me tell you the positives of the powerlines; animals can still graze under them, I can still take walks through their trimmed bottom areas as well as pick berries, watch for rabbits, deer, moose, foxes, etc. and much, much more.
But more importantly the Hydo Power promises to be less expensive than what we are doing with coal, oil and nuclear, all of which produce pollutants for our lives and even into our children’s future.

Another important fact as a former appraiser of rights-of-way for the Department of Transportation, if the company is forced to bury along roadways, what will be the effect to the environment?  What will blasting do to the areas, for surely no one thinks in our granite state there won’t be blasting. Worse yet, every time a road is widened for future populations we will again dig and blast and move buried lines. We will again disturb the environment.

I am all for first keeping our environment as near to undisturbed as possible, but at the same time to give me the cleanest, least expensive energy necessary to make my life easy.

When I visit Quebec and see the high towers carrying electricity south from my ancestors’ homelands, I marvel at man’s ability to build such beautiful structures.  I am sure when Julien Mercier came to Beaupre from France, he never imagined what would be, but I do know he used the power of water for his farmlands.

Finally, I say how dare the persons fighting this for the view which will be affected state they don’t want powerlines?  Do they expect all the poles and lines already in existence to disappear?  I don’t, so while I put up with those existing I have no problem with the building of the hydro power lines from Quebec for I know they will be where we already have towers and poles and lines strung affecting our view for a short distance or time as I travel our state’s byways.  And when I don’t want to see them I find a trail and take a stroll into the woods.