Joan and Phil Bilodeau's back yard in Deerfield. 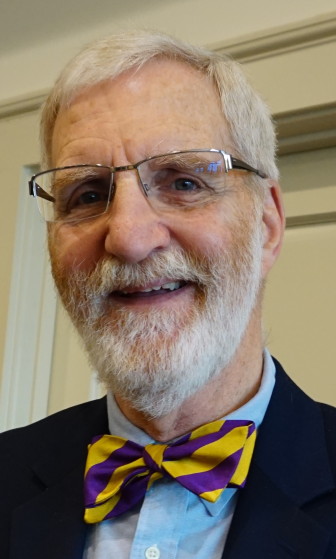 The proposed 192-mile Northern Pass transmission line to bring Hydro-Quebec’s energy from plants in Canada to Pittsburg then south to Deerfield ends way too close to home for Phil and Joan Bilodeau.

“When Northern Pass describes the project as coming from Canada and ending in Deerfield, it ends in Phil and Joan Bilodeau’s back yard,” said Phil Bilodeau during a break Tuesday at the Site Evaluation Committee’s subcommittee meeting in Lincoln.

“As we understand it, there will be a nine-acre substation in a rural piece of Deerfield that’s been our home for over 40 years,” Bilodeau said. The terminus substation project will start about 200 feet from their property, according to his lawyer Scott Hogan.

The committee, chaired by Martin Honigberg, chairman of the Public Utilities Commission, heard concerns from intervenors from Pittsburg to Concord on the Eversource project.

Many were not pleased about having been placed in groups and required to work together instead of on their own as the proceedings move forward. They included citizens, businesses, and advocacy groups.

Committee members at the marathon session at the Loon Mountain Resort heard testimony and deliberated on motions from 10 a.m. to 8:30 p.m. with about 100 people attending.

Bilodeau, the deputy director of public works for the city of Concord, took the day off from work to reinforce his argument to the Site Evaluation Committee why he and his wife should be sole intervenors. 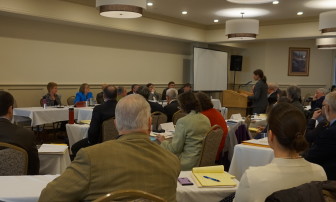 Danielle Pacik, deputy city solicitor for Concord, speaks to members of the Site Evaluation Committee at a subcommittee meeting Tuesday in Lincoln.

Deerfield. The evaluation committee formed groups to pare down the number of intervenors from 160 to about 24.

The Bilodeaus were ultimately successful in their motion to move forward as sole intervenors.

Steve Ellis spoke about why Pittsburg, Clarksville and Stewartstown should not be paired with Littleton and Bethlehem.

The committee later voted to pair Pittsburg, Clarksville and Stewartstown with Coos County, which had argued why it wanted to be unpaired with Grafton County.

Richard “Rick” Samson of Stewartstown, Coos County Commissioner District Three, and Grafton County Attorney Lara Saffo both spoke out against being paired together. Samson said the geographical distance alone would make it impossible to work with Grafton County, an argument echoed by Saffo.

“Our economic and social interests are much different,” Samson said.

The committee later voted to pair Concord with Pembroke, Deerfield and Canterbury.

“We’ll wait and see what the final order says,” Pacik said when asked if Concord would challenge the decision.

It’s very difficult to work with distant towns that don’t have lawyers representing them, whose boards meet once a month and have different reasons for intervening, Pacik said.

“The city of Concord is the largest municipality this project goes through,” Pacik said. “We have a third of the population.”

Concord’s reasons for intervening are different from the towns it was paired with, she said. “We have issues where it goes through heavily populated residential areas. It goes through commercial areas,” Pacik said.

Some of the property involved is protected by conservation easements, she said.

“We need to make sure Concord has its own spokesperson that can talk about those important issues,” Pacik said.

As municipal counsel, it would be difficult for her to be the spokesperson for the group because she represents Concord’s interests.

Tom Mullen, spoke on behalf of Peter Powell and himself as Realtors, calling their group Realtors Along the Northern Pass. Mullen challenged the evaluation committee’s denial of their intervenor status. The committee voted to stand by that decision.

Mullen said he will challenge the decision again.

“A lot of businesses were allowed to become intervenors, every one of which is pro Northern Pass,” Mullen said.

Mullen told the committee that people are being asked to put up with construction, torn up roads, violated wetlands and decimated property values.

“We’ve been told by Northern Pass that our rates will be lowered by $5 a month, $60 dollars a year. Come on,” Mullen said. “For what, a measly reduction in our bills that will be wiped out by next year’s rate increase.”

Powell’s letter to the SEC said that the Northern Pass project is already affecting property values. “The inability to sell so many properties throughout my market area, and the inability to sell others at anything but heavily discounted prices, impacts my ability and that of my associates to earn income which is contingent upon those sales.

“We have for five years now encountered properties which were impossible to market because of their exposure to the line regardless in many cases of distance, and others which could be sold only at discounts of up to 70 percent of true market value,” Powell wrote.

Honigberg said the SEC is having a very difficult time finding a venue to hold the adjudicatory proceedings in time to meet the Dec. 19 deadline to make a decision on the project.

Attorneys for Northern Pass said they would work to help find a venue.