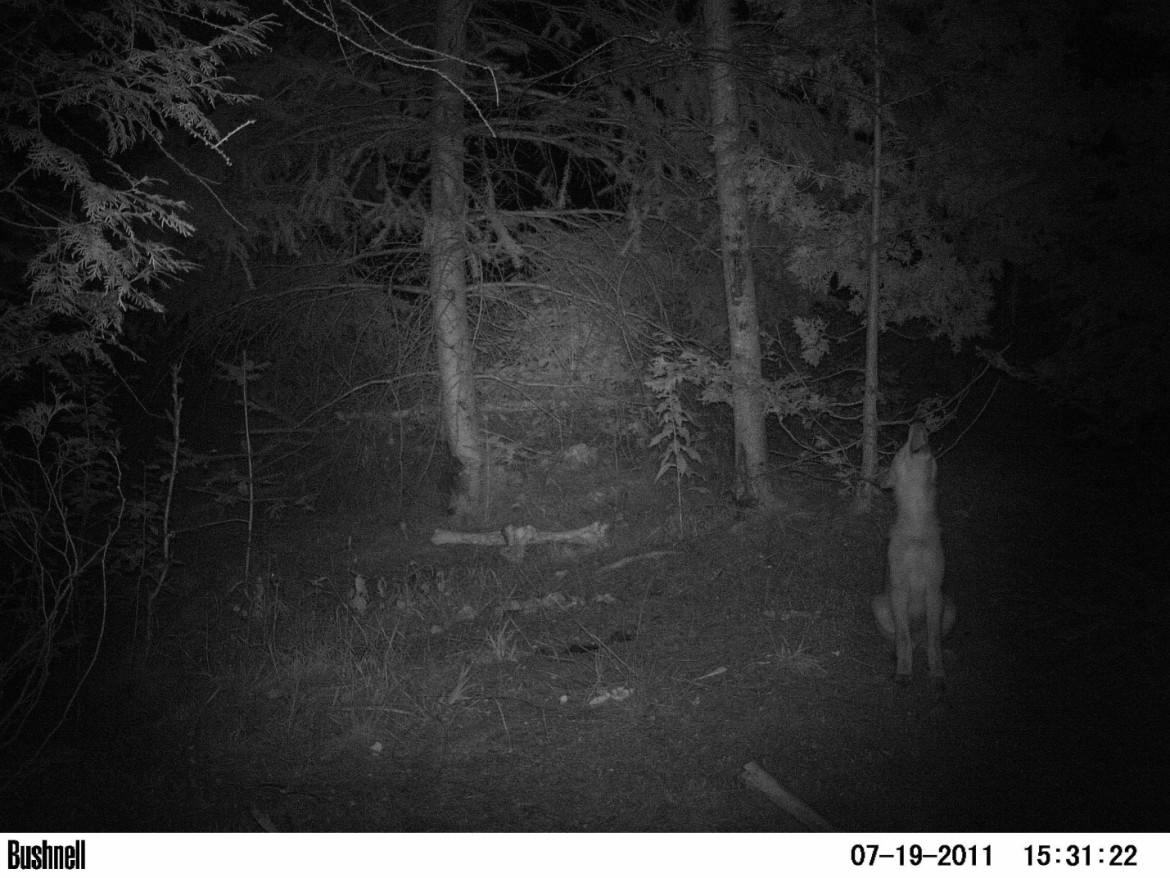 Coyote pup howling in the woods.

Howling from the Mountain writer Christine Schadler wrote a song and sang it to accompany this week’s column.

Howling in Woods and Fields  (What does all that racket mean?)

Asleep and snorin’, you’re feelin’ no pain (bum, bum, bum, bum)
Dreamin’ of summer with a beer and reggae
Sleep gets shattered by a psycho libretti
“I’m no psycho!  I’m Truman Coyote!”

My little soul-mate, she is a dream (bum, bum, bum, bum)
Smells the best of the ones I have seen
She’s no varmint, no coward or rover
For our lifetime, I’ll watch over

Howlin’, that’s what we do (bum, bum, bum, bum)
Make it the strangest of yodeling brews
Keeps our humans from getting their sleep on
Keeps their shootin’ a missin’ our behinds…

Truman, (ahoooooooooooooooo?)  you are the one (bum, bum, bum bum)
You make my sleep time zero to none
So please turn off your howlin’ now
Oh, wild doggie, hush now, somehow.

Did you sing through this?  If so, I wonder what your neighborhood coyotes think of your crooning?!

Well, what does a coyote mean with a sharp bark, repeated over and over?  Possibly that one member of the pack is trapped and the sibling is sounding an alarm for help.  This kind of event has been recorded a number of times.  Wolves do this too.

What about a bark- howl?  This is a common “Hello out there” cry.  Bark (Hey!)  Howl (I am alone and looking for a companion).  If the individual has left his pack and is searching for a mate, a bark-howl is a common come-on.

If the individual is searching for its pack, the bark-howl is repeated a few times until pack members respond.  If there is no response the coyote will move on and try in a different spot later.

Sometimes we hear a sudden nighttime irruption of yips, yipes, squeaks, barks, wahwoos and so on.  This is a pack of pups and some adults, most often in early to mid – summer, startling us from a dead sleep.  I receive more questions on this kind of vocalization than any other.

Why? Because that’s precisely when so many of us are out there enjoying the warm evenings and cooler nights, and are listening.

Each individual’s repertoire consists, seemingly simultaneously, of yowls, whines, yips, bawls and bays.  Even though the vocal chords of young coyotes are short, making their “howls” high pitched, they are capable of a variety of sounds which, when mixed with adult and sibling vocalizations, makes us believe we are living among many more coyotes than is actually possible.

Thus the pack intimidates competitors with their apparent numbers and strength, when in actuality, a pack may consist of five or six coyotes which will get pruned down to just a few by winter.

When humans reach puberty, our voices lower as our vocal chords lengthen and so it is with coyotes.  Thus, adults still yip, yipe, squeak and bark but can also howl, sometimes even a baritone howl, similar to wolves.  Since our eastern coyotes carry as much as 30% wolf DNA, it is not surprising that their body size, larger than their western cousins, is capable of some impressive crooning.

Coyotes, like most members of the dog family, are social. Here in the east, most coyotes live in packs which consists of a breeding pair and their young.  They depend upon each other to defend territory against competing predators; sub-adults (yearlings) also help to feed the young in the spring.  Howling is one way for pack members to keep in touch with one another, although despite popular assumption they do not howl to announce a fresh kill or a hunt.  When coyotes hunt they rely on stealth.  Thus, when the woods are quiet, coyotes and other predators are doing their job, which is to keep prey species in check.

If you could see a congregation of three or four coyotes in a pack-howl you would see them wagging tails, jumping around (with what appears to be joy) and nudging and hip slamming the breeding pair (mom and dad).  These pack-howls serve to reinforce pack bonds, social status and territoriality.  Howling is an important mechanism that sustains the social order within the pack that ultimately limits breeding and controls population growth.

There is nothing to fear when you hear coyotes howling.  Many concerned people report being “surrounded” in the woods by a pack of howling coyotes, fearing that they are gathering to attack.  I will tell you a story that should alleviate this concern.

I had located a rendezvous site (a meeting place used once pups are no longer in the den) and a month later was hiding in some dense brush downwind of the site, trying to shoot some photos.  I waited and waited for coyotes to appear.

After a few hours, it dawned on me that I might not have been so clever after all.  I slowly rotated my head to check around and could see from the corner of my eye a large animal behind me about 100 feet away.  He knew something was hiding in the brush but didn’t know what.  I stood and turned as quickly as possible to see what I was about to miss and all I glimpsed was the rapidly disappearing tails of four coyotes rocketing for cover.

They had me in their sights, were unsure what I was and so kept their curiosity at bay and waited and waited.  Once I stood, they knew right away what I represented:  Potential death.  And off they went.

So enjoy the howl.   New England has been without the call of the wild since 1900, when wolves were eradicated.  The arrival of this large version of the western coyote now fills summer nights with a thrilling, wild song heard through our open windows.  During the fall and winter they serenade each other and the intrepid humans wandering through our star-filled landscape.

Howling from the Mountain is a biweekly column about people and wildlife sharing turf in New Hampshire written by Conservation Biologist Christine Schadler.