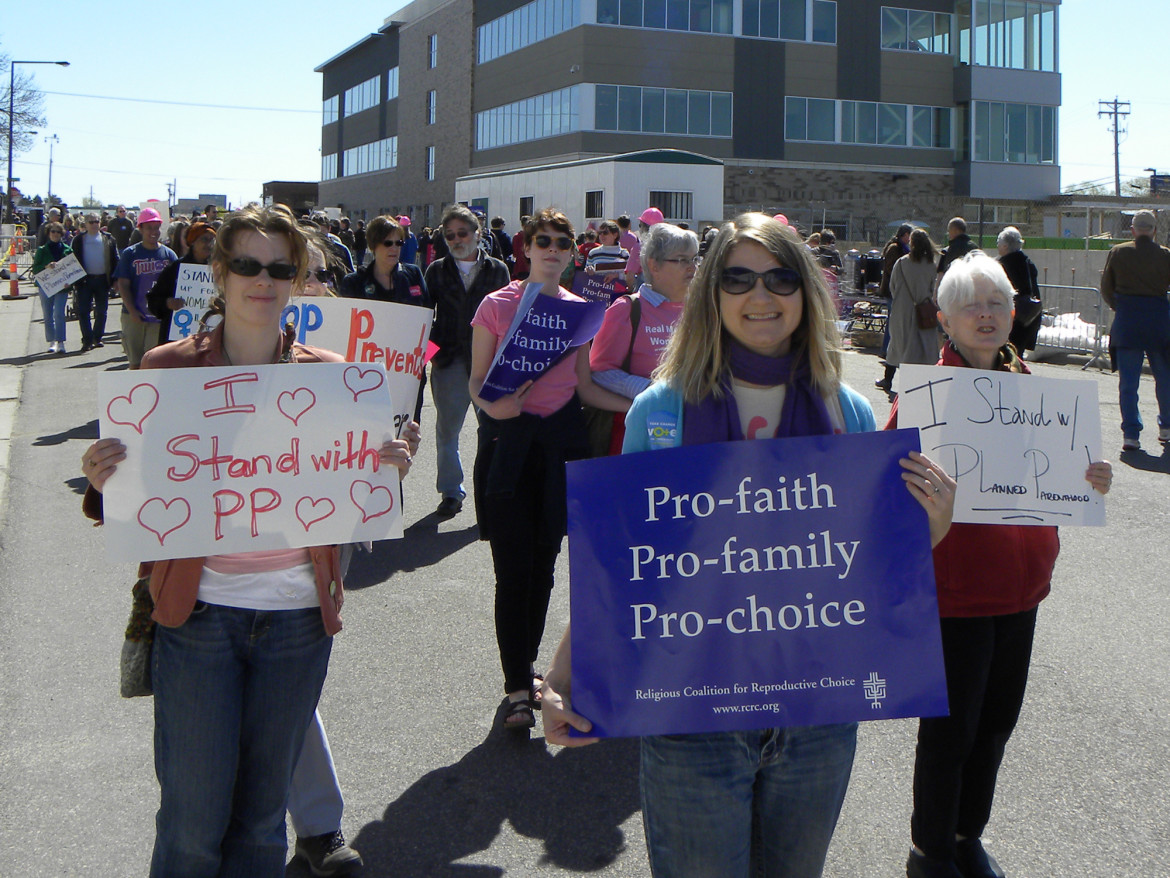 Both pro-life and pro-choice supporters turned out in Saint Paul, Minnesota to support and oppose Planned Parenthood. in this 2012 photo.

ProPublica’a reading guide to the Planned Parenthood videos, and what has happened since.

On Monday, a grand jury indicted David Daleiden, founder of the Center for Medical Progress, and Sandra Merritt, a center employee, on felony charges of tampering with government documents and a misdemeanor charge related to purchasing human organs. The charges stem from the investigation surrounding the controversial Planned Parenthood videos that surfaced last summer.

Marjorie Dannensfelser, president of the anti-abortion Susan B. Anthony List, said the videos “caused a watershed moment that we weren’t expecting.” They also helped set the stage for the latest battle in a decades-long attempt to bar Planned Parenthood from receiving federal funds.

The videos became a hot-button issue and talking points for many GOP primary candidates – some of whom turned to Facebook and Twitter to vent their frustrations with Planned Parenthood. Even Democratic front-runner, Hillary Clinton, called the pictures from the videos “disturbing,” although some of the images were later found to be deceptive [see below].

To help sort through the timeline of the controversy surrounding the videos here’s a reading guide:

This explainer tackles the overall issues of – and immediate reactions to – the Planned Parenthood videos, and introduces “the deeper question” of whether or not it’s ethical to use aborted fetuses for research.

Here’s a profile of David Daleiden, the recently indicted founder of the Center for Medical Progress who ignited the firestorm around Planned Parenthood after releasing the videos in July 2015.

Assault on Planned Parenthood was years in the making, The Hill, August 2015

The release of the videos signaled a shift in how Republicans frame the abortion debate. It turned from “war on women” methods that “put Democrats on the defensive,” according to this New York Times article.

An independent analysis of the videos commissioned by Planned Parenthood found that the videos were altered. The recordings in Houston and Denver, for example, were missing at least 30 minutes of footage each, according to video forensics expert Grant Fredericks. Daleiden’s group explained the lapsed time as “bathroom breaks and waiting periods.”

The real story behind those Planned Parenthood videos, CNN, October 2015

A CNN investigation found that the widely circulated photo from the video was actually of a stillborn birth, not an abortion. And, according to this CNN article, the video cited by Carly Fiorina in a GOP Debate “came from an outside source, an anti-abortion group called the Center For Bioethical Reform and [Daleiden] doesn’t know its origin beyond that.”

While the fight to bar Planned Parenthood from federal funding has been ongoing for years, the debate over fetal tissue research was long thought to be settled. In 1992,bipartisan legislation that canceled a funding ban on the practice, in hopes of finding cures to “devastating diseases” passed.

“The trouble has only just begun for you,” said Father Frank Pavone, national director of Priests for Life. Anti-abortion activists say that the Planned Parenthood videos are not the end but a new beginning in training “intelligence operatives” to infiltrate Planned Parenthood.

Here is a good primer on the charges that Daleiden and Merritt face, including tampering with a governmental record and attempting to buy human tissue.