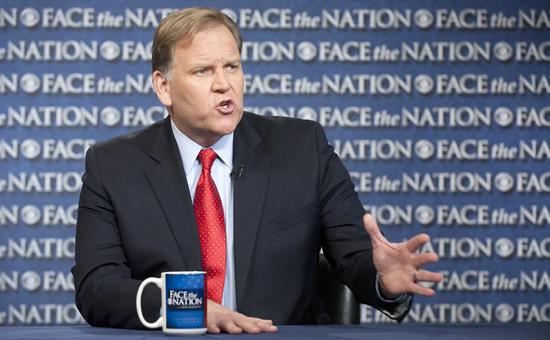 As they await January 2, 2016 — the day they can legally become lobbyists — former Rep. Mike Rogers (R-Mich.) and his former chief of staff, along with two more of Rogers’ onetime staffers, have found a use for some of the lawmaker’s $1.3 million leftover campaign funds.

It doesn’t involve many contributions to other candidates or the Republican party — two of the more common deployments of unneeded election money.

So far this year, the staffers and a new Rogers-led nonprofit have received $272,644 from his old campaign account, most of which was raised last cycle from industry political action committees. Rogers was chairman of the House Intelligence Committee when he announced his retirement in March 2014, declaring he’d serve out the rest of his term and leave Congress to do a radio show.

But he also became honorary chairman of a new group called Americans for Peace, Prosperity and Security (APPS), which received $200,000 of the campaign funds this year.

Money also went to Rogers’ former chief of staff Andrew Keiser, who became an assistant treasurer of the PAC in June, while the PAC paid $45,043 to his company, Keiser Strategies LLC. Keiser is also a principal officer of APPS, tax records show. According to Federal Election Commission data collected by the Center for Responsive Politics, Securing America’s Future is the only federal committee or campaign the company has ever had as a client.

Yet despite all that spending and the fact that Keiser Strategies’ work is labeled “political strategy consulting,” according to the PAC’s reports to the FEC, the PAC has donated just $5,000, or roughly 1 percent, to a federal candidate’s committee.

The payments don’t appear to run afoul of the law as long as Rogers isn’t paying himself, and his spokeswoman says he isn’t. “The personal use ban (on campaign contributions) sticks with the money — it is illegal for money raised by a campaign to be given to a nonprofit that creates a job for that candidate,” Paul S. Ryan, deputy executive director at the Campaign Legal Center, explained.

Rogers uses the nonprofit group, with offices in Iowa, New Hampshire and South Carolina, to advocate for hawkish defense policy in the Republican presidential primary. The organization also helps him keep up ties to some telecom and defense industry executives, according to The Intercept.

Those ties were formed back when Rogers had an active campaign — and raised the money he’d ultimately pass along to his new nonprofit. APPS’s advisory boardincludes Greg Brown, the CEO of Motorola Services, which gave $6,500 to Rogers from its PAC in the 2014 cycle. Contributions from the telecom services industry to Rogers in 2014 totaled $48,100, with $45,000 of that coming from PACs. The industry gave Rogers $252,950 over his career, campaign finance data shows.

Keeping up such relationships could pay off. For former lawmakers and top-tier employees like chiefs of staff, retirement starts the timer on a mandatory “cooling-off period,” or a brief spell during which the lawmaker or chief of staff is forbidden from lobbying his or her former colleagues in Congress; the time-out is a year for House members and generally a year for top staffers. Former members have found many ways around this rule, meant to throw a bit of sand in the gears of Washington’s revolving door. But it’s unclear whether Rogers or Keiser intend to take jobs on K Street when their cooling-off periods end in January.

The former lawmaker and his former chief of staff both were unavailable for comment when this reporter visited APPS’ Washington, D.C. office. Rogers’ spokeswoman said APPS and Securing America’s Future both strictly adhere to all federal reporting and disclosure requirements.