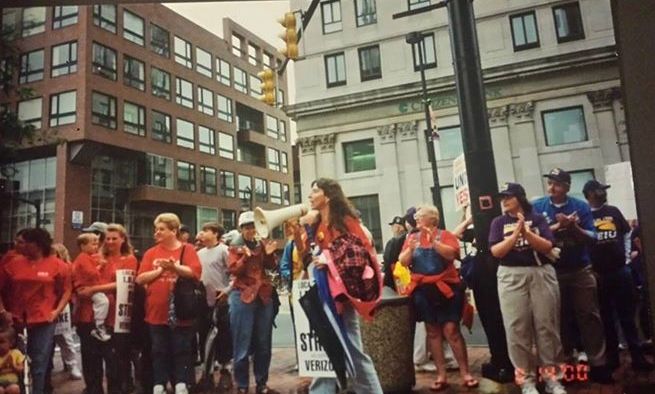 Linda Horan takes to the bullhorn at a Verizon strike rally in Manchester 15 years ago.

The Alstead woman who has stage 4 lung cancer posted some sad news on Facebook today, but was filled with gratitude anyway.

“The chemotherapy failed,” Horan posted. “Docs have a few more tricks up their sleeve and thanks to my fabulous legal team therapeutic cannabis will go a long way in improving my quality of life.”

Attorney Paul Twomey represented Horan for free in suing the state Department of Health and Human Services. Rep. Renny Cushing, D-Hampton, Fran Parker and Judy Elliott and many others have lent their support along the way.

Horan won her court case Tuesday to get her medical marijuana ID card now so she can buy therapeutic cannabis in Maine because New Hampshire dispensaries won’t be open until next year.

The state argued the law prohibited issuing a medical marijuana patient ID card until the New Hampshire dispensaries are operational in New Hampshire.