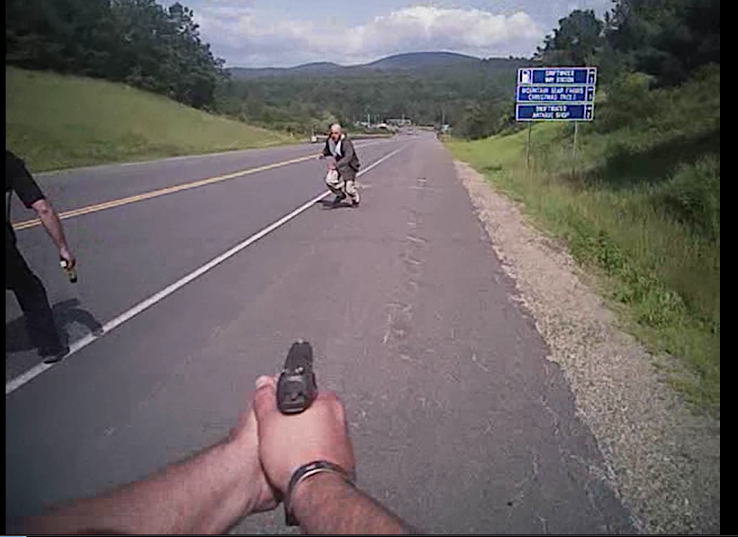 Esty-Lennon, 42, a chef who was living in Canterbury, had just crashed his car into an abandoned bridge just off Route 302 at 3:30 p.m.

As passersby tried to help Esty-Lennon before police arrived, one witness told authorities someone removed a knife from his chest right after the crash. It appeared he had tried to commit suicide.

Police had responded to reports of Esty-Lennon wandering onto Route 302 holding a knife.

An autopsy revealed Esty-Lennon had an amphetamine and Klonopin, which is used to treat seizures and anxiety, in his system at the time.

The body camera worn by Haverhill Police Sgt. Wallace Trott shows him arriving seconds after the shooting taking command of the scene. He asks Collins, who appears upset, if he is OK.

Trott: “We have shots fired. Who fired?”

Collins: “Ryan first, then me.”

Trott: “Did both of you strike”.

Collins: “I think so. We were within five feet.”

Foster released redacted video and complete audio from body cameras worn by Collins and Jarvis as directed by the court.

Foster also released footage from a cruiser camera that showed the fatal shooting from a distance, and footage from Trott’s body camera.

Foster had planned to release the complete footage from the four police cameras on Aug. 5, but was delayed by an emergency petition filed by Esty-Lennon’s former wife, Lisa Esty-Lennon.

She filed in Merrimack County Superior Court to keep any portion of the police footage from becoming public arguing her children would suffer and their privacy rights violated.

Media outlets, including InDepthNH.org, intervened arguing the full audio and video should be released so the public could decide whether the fatal shooting was “legally justified” as determined by  Foster.

Judge Peter Fauver ruled redacted video and all of the audio would ultimately be released yesterday.

Concord Attorney Diane Puckhaber filed her last appeal on behalf of Lisa Esty-Lennon to the state Supreme Court to stop it hours before the scheduled 2 p.m. release. The court denied her motion to reconsider and stay the release.

“Lisa is devastated,” Puckhaber said. “She worries how this is going to impact her children.”

“She hopes people will be sensitive to the needs of her children and not dwell on this unfortunate incident.”

Judge Fauver ordered redaction of the images from body cameras worn by Jarvis and Collins from the moment they fired their first shot to the time Hagen Esty-Lennon was placed in the ambulance.

Attorney Rick Gagliuso of Merrimack, representing InDepthNH.org, had argued the unredacted video and audio from all four police cameras should be released.

Gagliuso filed a motion to reconsider Fauver’s Sept. 4 ruling arguing it wasn’t clear whether the court took into account the public interest in assessing the performance of the two officers and in gauging the “soundness and completeness” of Foster’s probe.

Gagliuso also noted the court’s finding that the family has a “strong interest in preventing the release of … disturbing death-scene images.”

“InDepthNH.org is concerned the Court has accorded too much weight to the privacy interest of the decedent’s family, and insufficient weight to the public interest in the portions of the video it has ordered redacted,” Gagliuso wrote.

Representing the New Hampshire Union Leader and WMUR, Attorney Gregory Sullivan argued that what happened immediately after the two officers fired is imperative to fully evaluate the merits of Foster’s report on the incident.

Puckhaber said Foster’s report appeared to be very thorough. “Why is it necessary to release more?”

Puckhaber said making police bodycam footage public will have a chilling effect on crime victims. Her client has no intention of suing anyone in connection with Hagen Esty-Lennon’s death, Puckhaber said.

“My only purpose is to protect the children,” Puckhaber said.