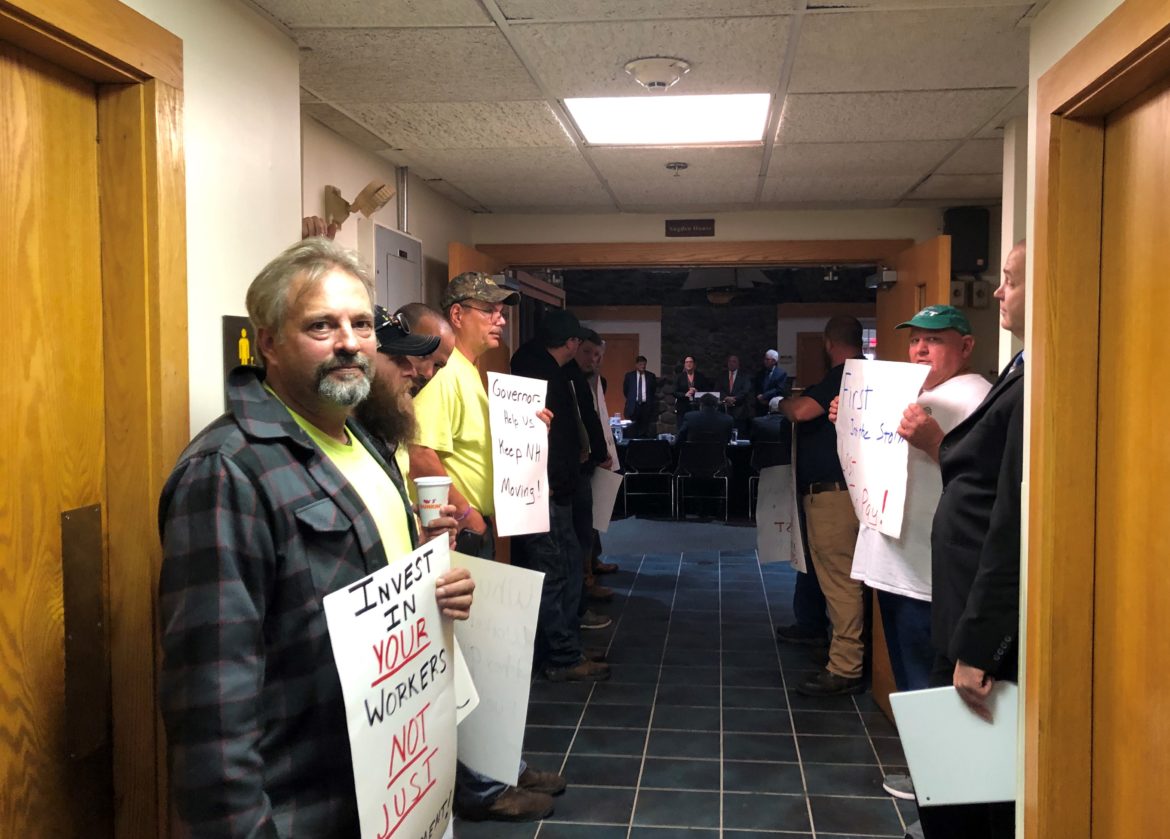 And they told him not to forget about their boots.

The men and women who take care of state roads are among an estimated 8,000 state employees who are working without a two-year contract since June 30.

An impasse for the state’s master contract was declared in April and following mediation with an arbitrator, a fact-finding report is soon to be released, said Andrew Toland, communications manager for the SEA/SEIU Local 1984.

A sub-unit of the master contract includes highways workers, who declared an impasse last month. Jeremy Davis was holding a sign in the hallway of the Seacoast Science Center, where the governor was to meet later with the Executive Council.

Davis said he loves his state job working as a mechanic, but most other employers pay a lot more. His sign said big box stores do pay more.

“It’s hard when you have to work two jobs to make a living,” Davis said. “It’s not fair.”

Executive Councilor Andru Volinsky, a possible Democratic gubernatorial candidate from Concord, drew the governor’s attention to the workers and noted concern for the “winter boot allowance.”

In the past, the state has provided DOT workers an allowance for a new pair of boots every two years but they would like it to be an annual allowance, said Toland. It’s still on the table.

“I just hope we don’t interfere with the boot allowance,” Volinsky said to the governor, who didn’t reply.

Unionized state employees walked away from the table this spring for the master contract, calling the governor’s offer “pathetic.”

Sununu replied at the time that the union’s “irresponsible antics” were hurting state workers.

But there is good news for retired state employees.

They are about to get their first cost-of-living adjustment raises since 2010.

It was contained in House Bill 616, which the governor signed into law last month. It does not take effect until next July, however, and will be distributed only after the first anniversary of retirement after July 1.

A master contract is a two-year contract which is usually negotiated to coincide with the state’s budget cycle.

A new state budget, just passed two weeks ago, allows for $6 million in raises, if both sides can get a deal. Such earmarks are typical in years when workers are out of contract.