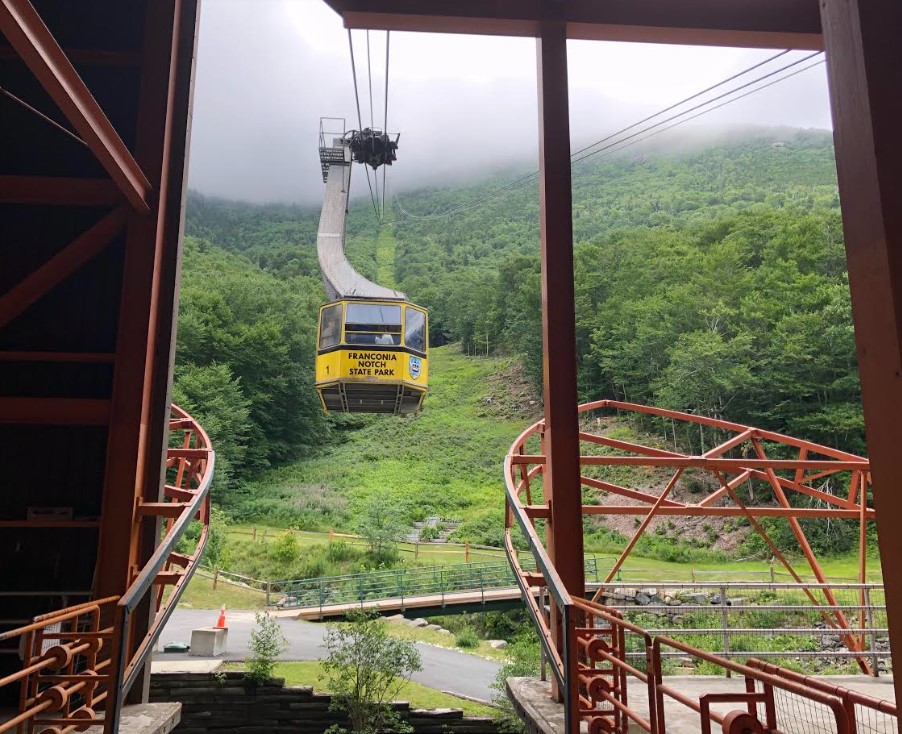 CONCORD – One of the state’s most iconic tourist attractions, Cannon Mountain’s aerial tramway, may be in for a replacement.

A legislative bill to spend $25 million of the 2023 state’s surplus revenues for a new tram has been introduced by a new state senator from Littleton.

Republican State Sen. Carrie Gendreau’s bill, Senate Bill 55-FN-A has been referred to the Senate Finance Committee but no date for a hearing has been set.
She was not immediately available for comment on Friday, as snow fell across the region in a winter that has had its challenges so far for the state’s winter tourism economy.

The 70-passenger tram, (80 passengers of capacity in summer) with its two cars, three towers, and rope, whisks passengers up 2.3 miles in eight minutes to the highest access lift point in New Hampshire at 4,080 feet.

It is in the heart of Franconia Notch State Park, surrounded by peaks like Mount Lafayette.

On a clear day, summit visitors can see Maine, New York, Vermont New Hampshire and Quebec in Canada with a 360-degree view.

The lift is considered a summer destination into itself for tourists and a winter conveyance for skiers at the state-owned and operated Cannon Mountain ski area.

The tramway was installed in 1980 by an Italian firm at the cost of about $5 million but in 2021 the state indicated it has a limited lifespan of about three to five years.

The tram replaced a smaller one, built in 1938 which was the first of its kind in America.
Open from late May through fall foliage season, visitors pay $28 to take the lift to the top and return to the base of the mountain at Echo Lake, walk around trails at the summit where there is a restaurant at the summit.

This winter, it has not been used yet by skiers but has been ferrying staff and food to the mountaintop restaurant. Normally in winter, the tram is open on weekends only but the trails leading to the tram have not had enough snow.

While it has never suffered a major malfunction, it has had to be evacuated in recent years and there has been an eye toward some sort of replacement with a February 2022 meeting held with the public to discuss options.

The options have included repairing it, replacing it in its entirety, or building a gondola.
There was overwhelming public support for a tram over a gondola.

While a gondola would increase lift capacity two to five times, it would be more expensive to operate and more vulnerable to the winds. The state noted there are 14 major components of the existing lift that would need to be repaired and replaced within a short time frame.

Sarah Stewart, the commissioner of the state Department of Natural and Cultural Resources, which includes state parks has called the tram “iconic” and an important part of state park operations.

Franconia Notch State Park is considered the crown jewel of the state park system and a driver of much of the revenue. The 6,440-acre property includes the Flume and Echo Lake beach, and there is even land used to produce maple syrup.

Of the 93 state parks, the state notes, Franconia Notch State Parks brings in 48 percent of all state park revenue.

John DeVivo, general manager of Franconia Notch State Park said in 2021 that a replacement of the existing tram might cost between $24 and $32 million.

Parks are self-funded but have received significant revenues during COVID-19 from the federal government to help improve its infrastructure and work on a backlog of deferred maintenance.
The ski area also has a unique financial arrangement where it receives a portion of the revenue from a lease of state-owned Mount Sunapee, now leased to Vail Resorts.

But those revenues would not be adequate to pay for such a major replacement or retrofit and are often used for things like septic system upgrades and smaller projects.

The base and summit buildings which house one of the two tram cars at night are large enough to accommodate a larger tram that could convey 100 passengers.

The bill calls for tapping the fiscal year 2023 surplus revenues for a replacement.
At the halfway point of the 2023 fiscal year, state revenues were up as much as $200 million ahead of estimates and $40 million more than the prior year with business taxes, hospitality/tourism, real estate transfer tax fees, and lottery revenues exceeding what is necessary for budget writers to achieve a balanced budget.