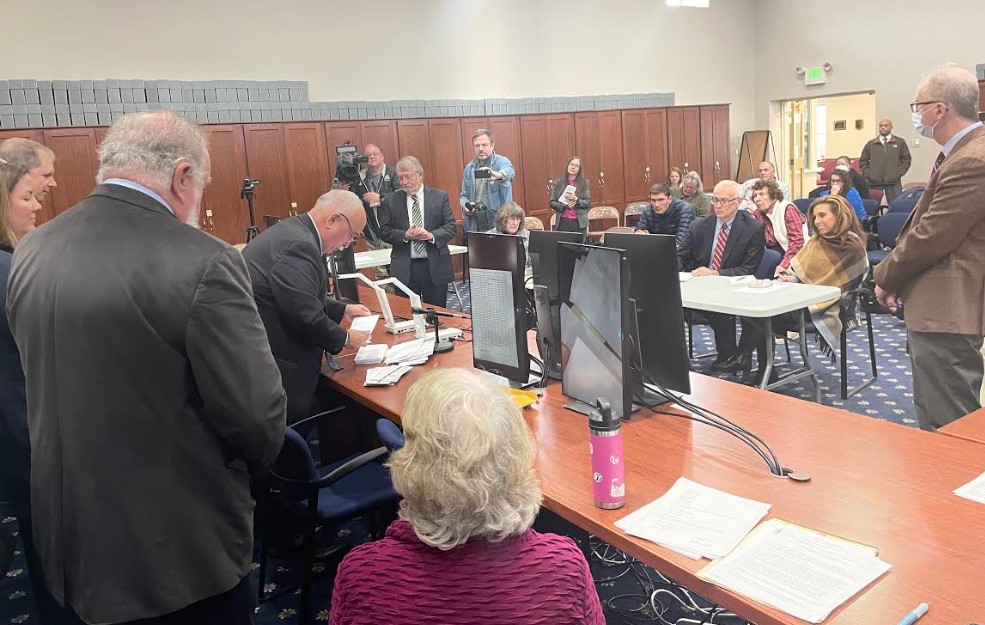 Elections Legal Counsel Bud Fitch of the Secretary of State's Office is pictured with ballots at the Ballot Law Commission meeting Monday.

CONCORD – After the state Ballot Law Commission met Monday, there were no material changes in the winners and losers for state House seats from the recent recounts with Republicans holding a 201-198 majority with one tie race still to be determined, likely by the legislature, for Rochester’s Ward 4.

Several appeals, including two related to that tied Rochester seat, were withdrawn before the Ballot Law Commission sat down to consider them.

The commission did agree to count 27 absentee ballots which appeared to have not been originally counted in the race for Rockingham District 6 in Brentwood in which Melissa Litchfield, a Republican, lost to Democrat Eric Turer 1,198 to 1,214.

Richard Chamberlain, Brentwood’s moderator for the past 41 years told the commission he made an honest mistake and may have placed the 27 unopened ballots into a box with empty, opened envelopes.
The mistake was found at the recount.
The 27 new votes counted on Monday found Litchfield gained 10 votes to 1,208 but not enough to defeat Turer who picked up 17 votes to end with 1,231 votes.

After the appeal, Litchfield said she had some concerns about the process and may consider legal action.

“I am very appreciative of the Ballot Law Commission taking up the time to open up the ballots. I appreciate that they took the time to listen. I do not feel we have reached 100 percent election integrity in New Hampshire yet, so I don’t feel this case is closed, yet,” she said.

Turer was not present for the appeal but was represented by a proxy to observe the ballot count.

In Coos County District 7 (Berlin, Carroll, Jefferson, Kilkenney, and Whitefield) there was also no material change in the outcome.

This was a case in which a recount flipped one seat from Republican to Democrat and that has held.

The recount found the Democrats won by two votes.
The recount results of 2,452 to 2,450 were appealed by Republican John Greer who challenged incumbent Democrat Eamon Kelley for the newly drawn seat.
A total of 20 ballots were challenged.

The Ballot Law Commission concurred with determinations by Secretary of State Dave Scanlan in all 20 cases.

An appeal was withdrawn for a House seat in Manchester’s Ward 6 which flipped initially from Republican Larry Gagne winning with 1,824 over Maxine Mosley’s 1,798 votes to a recount which favored Mosley, to an extended recount ordered by a Superior Court judge which found votes to favor Gagne the winner.

The commission recessed the meeting to a call of the chair with the possibility it might meet again over a recount for State Senate District 24 in which the Republicans, who lost the seat in the election, are challenging every absentee ballot cast, Scanlan said.

That recount, handled this past weekend, found the Democrat Debra Altschiller won 18,020 or 55 percent to the Republican Louis Gargiulo’s votes of 14,308 or 44 percent.

That seat was vacated by Dr. Thomas Sherman, a Democrat who ran unsuccessfully for governor against incumbent Chris Sununu.

Both House and Senate meet for the first time next Wednesday, Dec. 7 for organization day.