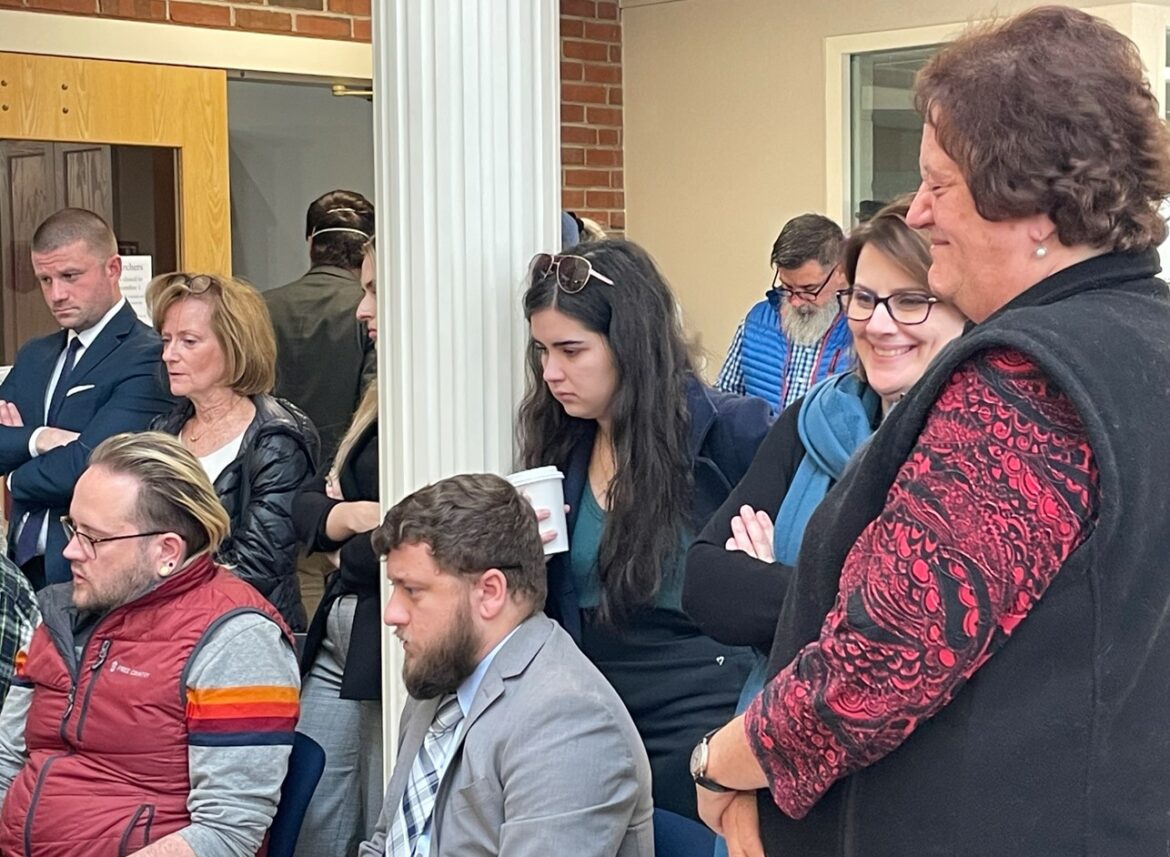 Maxine Mosley is pictured at right during Tuesday's recount order by a judge after Mosley was announced winner last week. Mosley lost to Larry Gagne.

By PAULA TRACY, InDepthNH.org
CONCORD – The court-ordered recount for a House seat in Manchester’s Ward 6 flipped again Tuesday, this time with Republican Larry Gagne winning by 26 votes with 1,824 votes over Democrat Maxine Mosley’s 1,798.

Mosley had beaten Gagne in a recount Nov. 14 by one vote.

This gives the Republicans an advantage with 201 seats in the House over the Democrats’ 198 with one race still a tie.

The controversial recount resumed Tuesday afternoon at the State Archives with candidates, political leaders, and members of the media hunched over tables, examining the votes in a tense battle for which party controls the House of Representatives for the next two years.

It was the subject of litigation this week between Democrats and Republicans after Secretary of State David Scanlan announced last Thursday that he wanted a further evaluation of the results to ensure the recount was accurate after he had called the race for Mosley days earlier.

By 1 p.m. Tuesday, the tabulation of the votes had begun. It was over at about 7 p.m.

There were four contenders for the two seats. The winners in Tuesday’s recount were the two Republican Incumbents William Infantine with 1,903 votes and Larry Gagne with the second highest number of votes at 1,824. Democrats Maxine Mosley had 1,798 votes and Holly Hillhouse 1,643.

It was one of 24 requested recounts for races in the 400-member House of Representatives which are now either completed or requests for recounts were withdrawn.

In addition to the Ward 6 recount, a recount in Coos County last week switched the initial winner, a Republican to a Democrat. And another, for Rochester’s Ward 4, ended in a tie which will have to be addressed either by the Ballot Law Commission or a full vote of the legislature.

On Tuesday, in addition to the Manchester recount, which was being held in the entrance hallway of the state archives, counters and observers were also going through a recount of a state Senate seat in District 24 where a Democrat won.

Anna Fay, spokesman for the Secretary of State’s, office, said that recount will continue either Friday or Saturday.
There will be no recounts on Wednesday but the remaining recount for the Hillsborough County registry of deeds will take place after the Thanksgiving holiday.
One state Senate recount was withdrawn by the candidate, Democrat Melanie Levesque, who is now a candidate for New Hampshire Secretary of State.
She issued a statement Tuesday before the outcome of Ward 6 was announced.

“Every vote in every election should be counted fairly and accurately — that is the cornerstone of our democracy. New Hampshire voters deserve a clear and transparent recount process. As your next Secretary of State, I will implement organized recount procedures — that are publicly available — to promote trusted and accurate outcomes for candidates and voters. I will be a diligent manager of our election process so avoidable mistakes like we’ve seen this week, don’t happen again.”
Levesque is expected to run against Scanlan.
She served in the House for three terms, and a term in the state Senate where she was chair of the Senate Election Law Committee.

Scanlan is also a former legislator and House Majority Leader who had worked as deputy Secretary of State under Bill Gardner since 2002. Scanlan took the role upon Gardner’s resignation this past January.
The position is not elected by the public but by the legislature every two years, at the beginning of the session.

“This recount marks the fourth time the ballots have been counted in the last two weeks (Election Night, Official Recount, Audit, and Today’s Recount).

“Four counts and four different numbers of ballots counted. The more times these ballots are counted the greater doubt is placed on the Secretary of State and his process.

“We are obviously disappointed in the outcome of today’s court hearing and recount, but unlike the Secretary of State and the GOP, we are going to follow the law and take our case to the Ballot Law Commission as prescribed in statute. We look forward to our hearing before the Ballot Law Commission as the next step in ensuring the integrity of this election,” Booth said.

after the conclusion of the recount for Hillsborough District 16:

“Don’t let the Democrats’ spin on today’s court ruling cause whiplash. The fact is that the Democratic Party attempted to take a legislative seat by subverting and disenfranchising voters. New Hampshire’s full and complete election process should play out to ensure the voters’ duly elected representatives are the ones, in fact, representing them.

“Despite the Democratic Party’s hypocritical antics, justice prevailed today. I thank Secretary Scanlan for ensuring that the recount was done accurately and that all votes were counted. Now that all the votes are counted, and the will of the voters of Manchester Ward 6 is known, I offer my congratulations to the Honorable Larry Gagne and the Honorable Will Infantine on their re-elections to the New Hampshire House,” Osborne said.