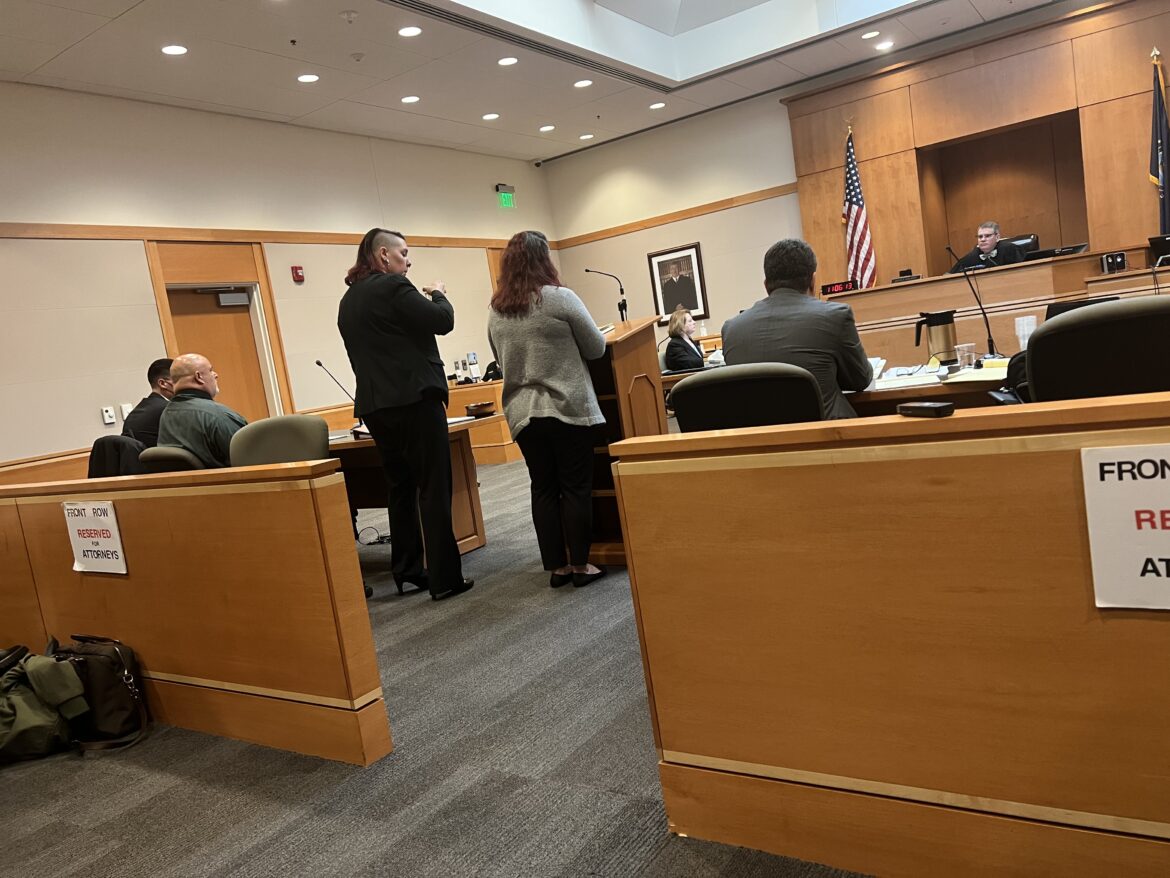 Jason Carroll is seated wearing a green shirt at the left table. Standing to his right is his attorney Cynthia Mousseau of the New England Innocence Project. Speaking at the podium is Carroll's sister, Jackie Carroll-Hughes and seated at the table to her right is Attorney Charles Bucca from the Attorney General’s Office. Judge N. William Delker is seated at the bench.

MANCHESTER – Superior Court Judge N. William Delker denied a convicted murderer’s request for early release after serving 33 years in state prison for the murder of a pregnant woman whose body was found in a Bedford construction site July 29, 1988.

Jason Carroll, 52, who maintains his innocence in the stabbing/strangulation death of Sharon Johnson, 36, of Bow, and her unborn baby, says his confession was coerced when he was 19 years old. He was seeking release Wednesday under a state law that allows inmates to petition the court after serving two-thirds of their sentence.

Carroll was convicted of second-degree homicide and conspiracy to commit murder by two different juries and sentenced to 46 years to life.

Carroll’s attorney Cynthia Mousseau, the New England Innocence Project lawyer in New Hampshire, said the hearing was only her first step in trying to free Carroll, who she insists is innocent.

Delker took a brief recess at the end of the hearing, then denied Carroll’s motion from the bench in Hillsborough County Superior Court North in Manchester Wednesday after hearing from Carroll, his sister, Jackie Carroll-Hughes and supporters, and members of Sharon Johnson’s family.

Delker called the murder of Sharon Johnson one of the most notorious crimes in New Hampshire history.

Delker told Carroll: “Your failure to accept responsibility and to cooperate when you had the opportunity to do so meant that your co-conspirators have escaped justice for this brutal, brutal murder.”

Delker was referring to Sharon Johnson’s husband Ken Johnson and Anthony Pfaff, who had been dating Ken Johnson’s daughter. Pfaff worked with Carroll in an industrial cleaning business at the time.

Pfaff and Ken Johnson had both been charged in connection with the murder under the theory that the three of them committed it together, that Ken Johnson paid Pfaff and Carroll for their roles.

Pfaff was acquitted at trial, and charges were dropped against Ken Johnson for lack of evidence when Pfaff and Carroll refused to testify against him. Pfaff and Ken Johnson have both died since.

Tom Eaton Jr., Sharon Johnson’s nephew and her daughter Melonie Eaton and other family members were also in the courtroom Wednesday.

Tom Eaton said Sharon Johnson was the coolest of aunts.

“The Eaton family would like to sincerely thank Judge Delker and the state Attorney General’s Office for renewing our faith in the legal system and all the hard work they put in to bring justice to Sharon Johnson and her unborn child,” Eaton said.

Attorney Charles Bucca from the Attorney General’s Office focused his questioning on Carroll’s refusal to take responsibility for the murder.

A former corrections officer testified to Carroll’s model behavior. Several former inmates who have since been released testified that Carroll helped turn their lives around by mentoring them in prison.

Mousseau said she is preparing to argue to prove Carroll’s innocence. On Tuesday, she filed a petition for post-conviction DNA testing.

In the petition, Mousseau said the only evidence against Carroll was “statements coerced from him by police interrogation tactics that have since been discredited.”

Mousseau said there was a substantial amount of evidence collected from the crime scene that has never been tested for DNA.

The petition seeks DNA testing for Sharon Johnson’s fingernail clippings, scrapings from under her fingernails, fingerprints lifted from inside her car, clothing and jewelry found on or near her body among other items.