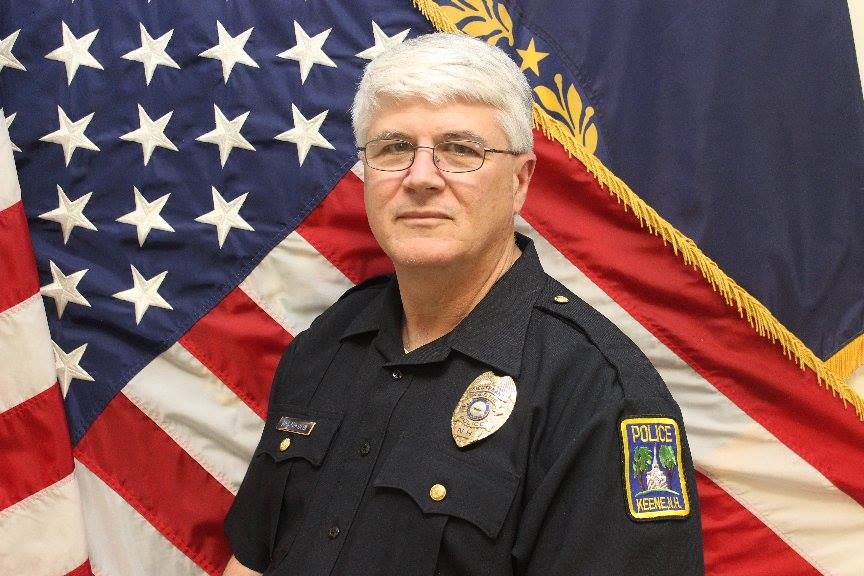 James McLaughlin retired from the Keene Police Department as a respected investigator with a reputation for his dogged pursuit of some of the worst criminals in society: child sex abusers.

But questions about McLaughlin’s record as a police officer started to surface when the state released its first partially redacted public copy of the Laurie List, or Exculpatory Evidence Schedule, in late December as required by a new law.

The list of police with credibility problems was partially released after decades of secrecy and several years of litigation led by the New Hampshire Center for Public Interest Journalism, and a new law that offered police the chance to file a lawsuit in Superior Court arguing to have their name removed from the list.

The first list released by the Attorney General’s Office included McLaughlin’s name. Then suddenly it didn’t.

McLaughlin was listed on the original partially redacted EES, released on Dec. 29, 2021. The reason stated for McLaughlin to be on the list of law enforcement personnel with credibility problems was because of a 1985 incident in which he reportedly falsified records. However, hours after that first EES was published, the New Hampshire Attorney General’s Office attempted to unpublish the information.

The Attorney General’s Office had accidentally published the list that included McLaughlin and the names of several other officers who are fighting their placement on the EES in court.

“The list has since been amended because we were notified afterwards about lawsuits that we were not previously made aware of,” Associate Attorney General Jeffery Strelzin said at the time of the snafu.

The court filed all of the lawsuits under John Doe or Jane Doe and their names won’t be released until a judge rules they should be. The judge could also rule the name should be removed from the list and it won’t become public in what has so far been a confidential process and the cases sealed.

McLaughlin continues to work in law enforcement after having retired from the Keene Police Department. He is currently a part-time investigator for the Cheshire County Attorney’s Office, based in Keene.

After his name was re-redacted from the public EES list, InDepthNH.org filed a right-to-know request with the city of Keene and the Keene Police Department that went ignored for months until InDepthNH.org’s reporter obtained legal representation by Attorney Tony Soltani. The city released documents responding to the right-to-know request last week.

InDepthNH.org asked for all internal affairs reports regarding McLaughlin, and the city supplied reports on two incidents: one in which McLaughlin was suspended for lying about shooting his gun, and another in which he “accidentally” destroyed an audio recording that could have put him in a bad light.

The records obtained by InDepthNH.org indicate there are more internal affairs reports dealing with McLaughlin, which the city has so far not provided. The city has also not provided an explanation for the omission of the other reports.

According to the records the city did release, McLaughlin was suspended for firing his gun during the first reported incident. McLaughlin and another officer went to an area off Drummer Road to break up a teen drinking party in November of 1986.

After the teens fled the approaching officers, McLaughlin and his partner, Edwin Bourassa, put out the fire. McLaughlin then decided to destroy the beer and took out his service revolver and fired two shots at the beer kegs, according to then-Keene Police Chief Harold Becotte’s disciplinary letter.

“Officer Bourassa did not have any part in making this decision and, in fact, was quite shocked by Officer McLaughlin’s action,” the letter states. “Officer McLaughlin felt that the kegs were far too heavy and cumbersome to carry the long distance out of the woods and that no one would be in danger if he shot holes into them.”

Neither bullet penetrated the beer kegs, however, and the officers instead rolled them into some nearby bushes, according to the letter. Unfortunately for McLaughlin, Sgt. Edward Gross was responding to the report of the party and heard the shots. Two intoxicated teens Gross encountered told him that one of the officers at the campsite was firing his gun. When Gross questioned McLaughlin and Bourassa, McLaughlin lied about firing his gun, according to the letter.

“Officer McLaughlin told (Gross) that there had just been some fireworks thrown into the campfire,” the letter states.

By now another officer, Lt. Thomas Cunningham, had responded to the scene, and McLaughlin continued to tell the false story about the fireworks.

Once the story came to light, McLaughlin was disciplined for showing poor judgment in firing his weapon, according to the letter. Becotte recommended that McLaughlin receive a four-day suspension without pay.

In the spring of 1988, McLaughlin received a letter of reprimand from then-Chief Thomas Powers after McLaughlin was involved in a December 1987 heated verbal confrontation with a civilian on the phone, and later inside the station. It was during this incident that the audio recording of the phone call was destroyed under suspicious circumstances, according to Powers.

“In the subsequent interview concerning the incident, no reasonable reason for the blank tape was found and an electronic examination of the tape revealed unintelligible voices,” Powers wrote. “You provided statements that you had ‘words’ with the complainant and had rewound the tape to get his name yet did not purposefully erase any part thereof. You could not explain the misfiling of the tape, nor why the log did not indicate the tape cleaning or changing at 2400 hours.”

Powers indicates that McLaughlin already in 1988 had a record for bad behavior as a police officer.

Powers called McLaughlin’s explanation for the tape erasure “unacceptable,” though he did not impose any suspension for the matter. Powers encouraged McLaughlin to use the reprimand as motivation to change his attitude.

In the late 1990s and early 2000s, McLaughlin would become a celebrity investigator, gaining fame for his then-innovative use of the internet to catch child sex abusers. He would also travel the country teaching his methods to other police officers. McLaughlin made cases against the suspects by posing as a teen in online forums and engaging in sexually charged conversations with adult men. At his peak, McLaughlin made 400 arrests on his own, according to a 2003 Boston Globe profile.

McLaughlin was also the lead investigator in the case of former Catholic priest Gordon MacRae. MacRae was convicted in 1994 on five counts of sexually assaulting a teen boy. He has claimed that McLaughlin offered to pay cash to one of his accusers during the investigation. MacRae has maintained his innocence, though failed in all his legal appeals in the case to date.

There were warning signs during the celebrated part of McLaughlin’s career. During a 1997 investigation into Vermont resident Lee Allaben, McLaughlin would send child sex abuse images to the suspect he would later arrest as a way to get Allaben to engage with McLaughlin’s online persona. The case would end up in the federal United States District Court in Concord. When McLaughlin’s actions came out during the court proceedings, United States District Court Judge Steven McAuliffe censured the police officer in court.

In 1998, a federal appeals court threw out the conviction of a Massachusetts man, Paul George Gamache, who travelled to Keene initially to have sex with someone he thought was an adult woman, but who turned out to be McLaughlin. During the online discussions with McLaughlin, Gamache was offered, and agreed, to have sex with a minor. The First Circuit Appeals Court in Boston ruled that McLaughlin had entrapped Gamache.

In 2016, Adelbert Warner II, and three other men, all prosecuted and imprisoned after they were investigated by McLaughlin, filed a lawsuit claiming McLaughlin had altered the text conversations used to help prosecute them. That lawsuit was eventually dismissed on technicalities, in part, because it was filed past the relevant statute of limitations.

McLaughlin did not respond to a request for comment, nor did Cheshire County Administrator Christopher Coates.

The numbers don’t include another 30 names that have been removed through a confidential process in the Attorney General’s Office.

The names are compiled to alert prosecutors when an officer with sustained discipline for dishonesty or excessive force in his or her confidential personnel file must be disclosed to a criminal defendant, which is constitutionally required if it includes evidence that is favorable to the accused. Even years later, if it is discovered that the favorable evidence known as exculpatory evidence wasn’t turned over before trial, the defendant could seek a new trial.

Disclaimer: The NH Center for Public Interest Journalism publishes InDepthNH.org online. In its lawsuit against the attorney general seeking the names of all of the police officers on the Laurie List, the Center is represented by attorney Andru Volinsky.