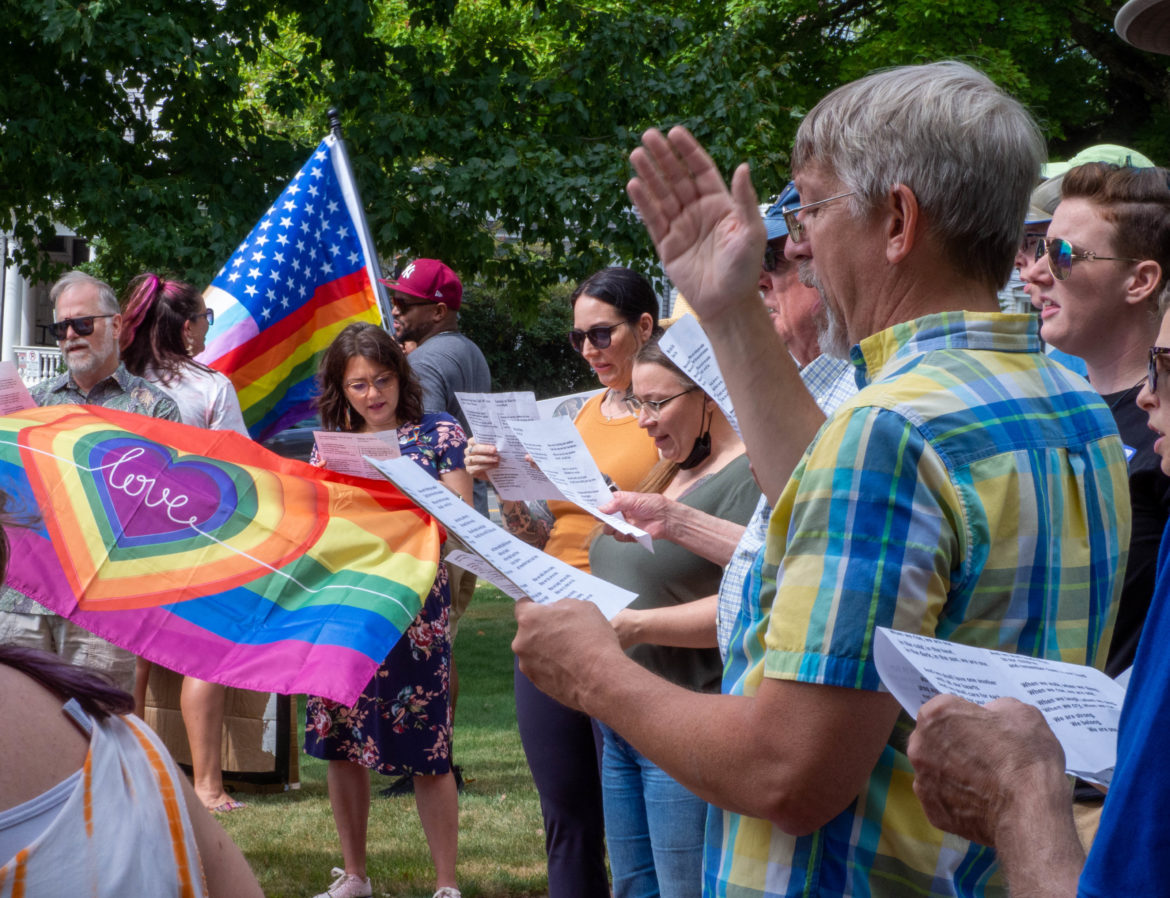 Kimmy Hicks was chatting with a friend on a recent Saturday evening when she looked out the window of her Nashua apartment building and saw 20 white nationalists marching by.

“They all wore khaki pants, black shirts, and these black, weird facemasks that go from right under their nose all the way down to the bottom of their neck,” Hicks said. Moving at a rapid pace, they “came storming by right outside the window, down the ramp on Water Street, and they were walking in traffic.”

Hicks, a 23-year resident of Nashua, described the scene to me at a No Hate rally held Saturday at the Soldiers and Sailors Monument near Nashua’s downtown. “They barged down Main Street while everyone was outside having dinner, which must have freaked everybody out,” she said, “because who knows if they had guns or if they didn’t.”

Another Nashua resident posted photos on Twitter of what was apparently the same group holding banners on Library Hill the same day.

The marchers are believed to be members of NSC-131, a Neo-Nazi group which also marched in Kittery and Boston this summer. It was not their first appearance in Nashua. Last year they demonstrated outside the city’s School Board meeting.

Rep. Catherine Sofikitis, who represents Nashua’s Ward Seven in the state legislature, told me, “We got a lot of these Nazi flyers on porches in my neighborhood,” which she described as “heavily diverse.”

It was the latest incident that prompted state Rep. Maria Perez to organize Saturday’s rally. She lives in nearby Milford, but said she also thinks of Nashua as her home. “Nashua is a welcoming city,” Perez said. “We want everyone to feel welcome. And we don’t want hate in our city.”

“That’s why we’re out here,” said Marcus Ponce de Leon of Manchester, who helped Perez put on the event. “Because, you know, we want to make sure we drive home the point that hate has no home here in Nashua or anywhere in New Hampshire, for that matter, or anywhere.”

“There’s just no room for that here in Nashua,” Sofikitis also told me, “no room for it anywhere.

But we will fight back every time they come.”

The message was echoed by other local religious, community, and political leaders, including Mayor Jim Donchess. “We want to make it clear that Nashua is a community for everyone, that we value and welcome every individual, and the hate that’s been going on … in recent years is something we reject completely,” he told me after giving a short speech to the crowd of about 35 people.

As evidence, the mayor pointed to the variety of ethnic celebrations held in the city and an annual Pride Parade.

The city’s website states proudly, “Nashua is committed to continue building a welcoming and neighborly atmosphere in our community, where all people including immigrant newcomers are welcome, accepted and integrated; and to encourage all residents of Nashua to do their part in reaching out and welcoming all who live, work and visit Nashua.”

The rally featured chants led by a member of the Party for Socialism and Liberation (PSL) and some spirited singing by the choir from the nearby Unitarian Universalist Church. No fascists were spotted.

That was not the case the next day in Manchester, where a coalition of groups led by the PSL held an abortion rights rally marking Women’s Equality Day, the anniversary of the Nineteenth Amendment, which gave (white) women the right to vote.

Mustered at City Hall Plaza, this rally of about 100 people also featured chants and speeches, including some by women who had undergone abortions. Across Elm Street, about a dozen members of the Proud Boys waved American flags, held placards with slogans such as “Real women protect babies not kill them,” and shouted their own chants.

The Proud Boy presence came as no surprise to the rally organizers. Their press release, issued three days earlier, indicated they had already heard of plans for a counter demonstration by the white nationalist group. “The fascist Proud Boys’ fear-mongering and opposition to this peaceful rally only exposes that there’s nothing ‘pro-life’ about their opposition to reproductive justice. In contrast, the movement for reproductive justice is in essence a movement for human and democratic rights,” the sponsoring groups said.

With yellow-vested marshals arrayed throughout the crowd to support the organizers’ intent to keep the event peaceful, the rally went on as planned. With speakers facing the street and rally-goers spread along the sidewalk, it appeared at times that the counter demonstrators were the audience. Based on their chants, taunts, and siren noises from their bullhorns, it was obvious the Proud Boys were, in fact, listening.

Rep. Maria Perez, D-Milford, whom we might call long on courage but short in stature, stepped onto a metal bench before launching into a speech. “I’m going to go up so you can see me,” she said.

“I’m here because reproductive rights are human rights,” she said. Identifying herself as a survivor of sexual assault, the Salvadoran native said, “It’s my uterus and it’s my choice.”

“I’m talking,” Perez told the disrupters across the street. “If you have a uterus you can come and talk to me, but if not, you don’t have the right to tell me what to do with mine.”

“My body, my choice,” the crowd chanted.

After the final speaker, Ana Maria Branden of the PSL wisely urged everyone to stick together as they walked back to their cars. The Proud Boys remained across the street as the crowd dispersed.

At the Nashua rally, Kimmy Hicks told me she had encouraged a friend to move to Nashua because it is such a safe, welcoming city. The presence of white supremacists came as a shock.

“We don’t have stuff like this here,“ she still wants to believe.

The point made by Rep. Sofikitis and Marcus Ponce de Leon bears expanding: