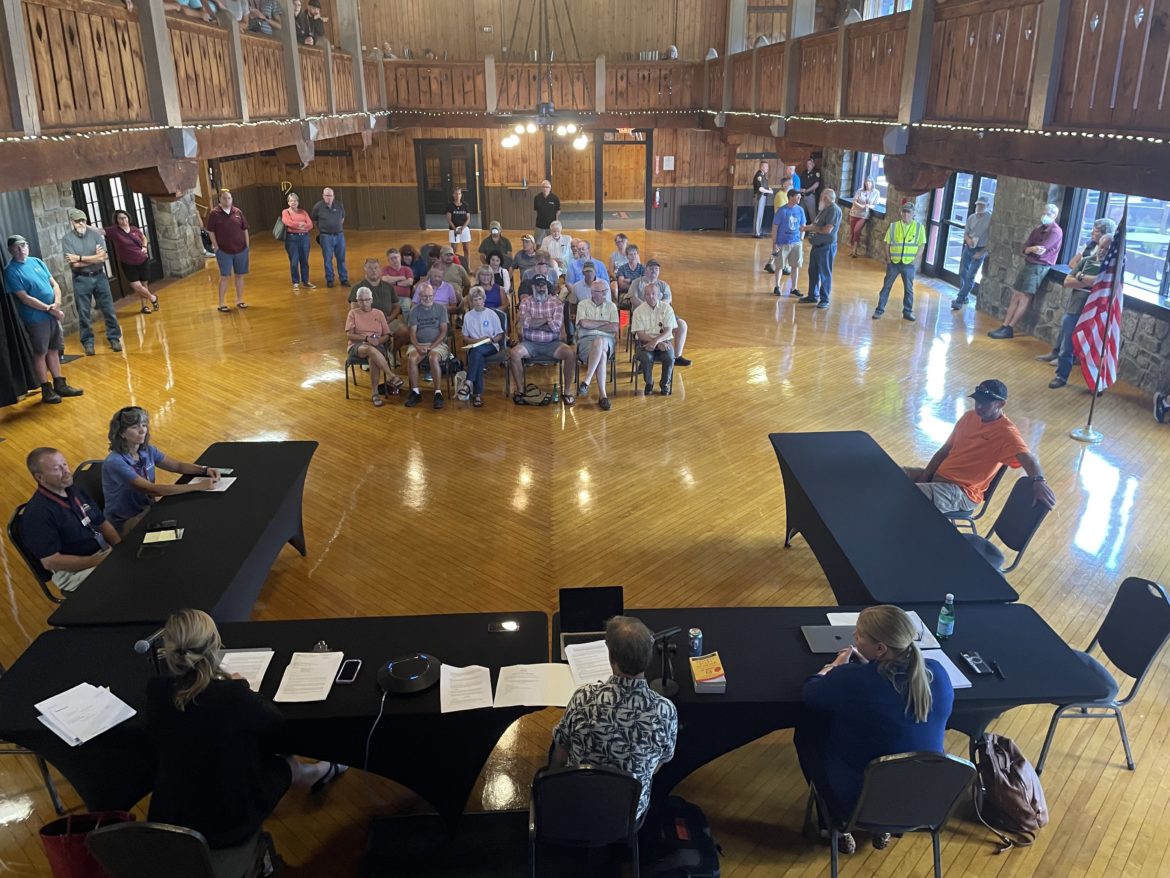 GILFORD – In an effort to move forward from a political battle that temporarily closed the Gunstock Recreation Area last month, the Gunstock Area Commission voted 3-0 Monday to pay a law firm almost $45,000.

But legal troubles for the ski area, its Belknap County owners, and the future of the commission are not entirely over.

Doug Lambert, a member of the commission, said that the money approved from the Gunstock coffers was to pay lawyers who are still conducting an investigation into the merits of litigation between the Commission and the 18-member all-Republican legislative delegation which relate to a political power struggle.

The matter predates the meeting on July 20 when seven members of the Gunstock administrative staff quit en masse claiming they were being micromanaged by political extremists placed on the commission by members of the delegation who support leasing operations.

This led to operations at the county-owned recreation area grinding to a halt and put the county in a position of possibly being sued for a breach of an upcoming contract to operate SoulFest 2022.

The staff returned in time for the event following their demands that two members of the commission needed to go, which were met by an emergency vote of the delegation.

Lambert said he regretted having to agree to the payment to the law firm. He noted that the commission had already authorized about $17,000 to the Preti Flaherty law firm of Concord and expected another $8,000 before the report is rendered, likely by the end of this month.

In an interview, he noted it was wasteful spending that could have been better used on the mountain, including the new air conditioning and window replacements at the base lodge of the ski area.

“We need to get through this and just move on,” said Commissioner Denise Conroy of Alton, also agreeing to the payment.

She was installed as a third member of the five-member commission when a majority of the legislative delegation called for an emergency meeting on Aug. 1 and voted her in to fill the term of Dr. David Strang of Gilmanton, who resigned after the vote.

Jade Wood, the third member of the commission, also agreed to support the payment of the legal fees.

Wood said the payment “makes me sick,” but she said she wanted to “start the healing process” and move on from the legal spats.

Meanwhile, as vacationers were using the zip lines and other recreational amenities outside the meeting, things returned to normal at the recreation area, said Tom Day, general manager.

While there was a record attendance at Sunday’s Belknap County Residents’ Day at Gunstock, and a lot of support expressed for the staff who returned after their demands that Strang and former GAC Chair Peter Ness go, there are still legal questions including new ones which are now headed to Belknap County Superior Court.

Attending the special meeting of the GAC Monday morning was Belknap County Delegation Chair, state Rep. Michael Sylvia, R-Belmont, who said after the meeting that a citizen has filed suit challenging the legitimacy of the Aug. 1 meeting in which Conroy was installed and the resignations of Strang and Ness, and member Gary Kiedaisch of Gilford, who quit in solidarity with staff in July. Sylvia did not attend that meeting.

He said he shares the concern of the citizen, whom he identified as Stephen Peterson, who has filed suit claiming the Aug. 1 emergency meeting was illegal. Sylvia said a hearing is scheduled in September on that suit.

Sylvia, a Free Stater, is normally the one to call for meetings of the 18-member all-Republican Belknap County Delegation. State Rep. Harry Bean, R-Gilford, said he was the one who called for the emergency meeting “and I got my legal opinion from the county attorney and he told me everything that happened was legal.”

Bean was among the members of the delegation who voted Conroy in and accepted the resignations.

A political action group has formed and is planning to announce a slate of candidates it will support to challenge legislators.

The Citizens for Belknap have claimed Gunstock was being held hostage by political extremists and they noted they are libertarians and Free Staters who want to lease Gunstock.

Gov. Chris Sununu, a fellow Republican, has weighed in on the controversy. He congratulated citizens and their groundswell of public pressure to reopen Gunstock and support its staff.
Sununu criticized Sylvia and other elected leaders who chose not to attend the emergency meeting.

The governor, who is also running for re-election, said it makes it that much easier for the residents of the county to vote the no-show legislators out of office this fall when they are all up for re-election.

Sylvia said in an interview after Monday’s meeting that the emergency meeting on Aug. 1 was called based on a legal opinion by Belknap County Attorney Andrew Livernois which he believes was wrong.

“It appears to me that the county attorney did not evaluate all the information available regarding the statutes,” Sylvia said.

Asked if Peterson prevails, what would happen to Conroy’s appointment and even the acceptance of resignations, Sylvia said:

“It depends on the judge what he rules whether or not things should be reversed.”

Conroy, a former CEO who is new to the county, called for an end to “the witch hunts” referring to the legal battles which are costing the county so much money.
“This is a stunning amount of legal work and the rates,” she said, were high.
But she said, “sometimes you have to suck it up and get done with it.”

The commission also voted to disband the litigation subcommittee saying there is no need for subcommittees on a five-member board.