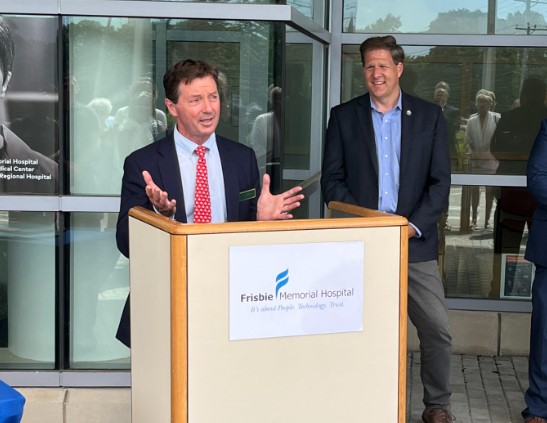 Democrat Dr. Tom Sherman of Rye, who is running for governor, is pictured with Gov. Chris Sununu last week at the signing of a bill he sponsored at Frisbie Memorial Hospital.

GILFORD – Feeling the political heat from constituents in the Lakes Region, legislators are eager to get Belknap County-owned Gunstock Mountain recreation area back in operation saying it is costing jobs, local business revenue, and may adversely impact county taxes.

Taking to Twitter, several are also calling for Free Staters such as state Rep. Mike Sylvia, R-Belmont, chair of the Belknap County delegation, to be ousted by voters at the polls this fall.

And those seeking votes, including Democratic gubernatorial candidate Dr. Thomas Sherman of Rye, plan on knocking on some doors in Gilford this weekend as Gunstock has become the talk of the region, if not the whole state.

The political storm over Gunstock had been building for months but erupted in a walkout by all senior management and Commissioner Gary Kiedaisch July 20. Supporters say they were fed up by a majority of the politically appointed members of the Gunstock Area Commission, which acts as a board of directors, but had taken on management tasks and was overstepping its role.

Sylvia sees it differently. He believes the walkout and ensuing chaos may be linked to possible wrongdoing.

Sylvia brought to light this week a $500 donation from the Gunstock Area Commission to Sununu’s 2020 campaign, insisting it was inappropriate and possibly illegal. Sununu’s campaign manager said there was nothing wrong about the donation.

“Since gunstock is owned by Belknap County all of its funds are public monies and using public dollars to support a political campaign is clearly improper and possible violative of law,” Sylvia said in a published statement.

Sylvia said because the commission is in the midst of an audit and “an internal legal investigation authorized by ALL of the Gunstock Commissioners, this and other financial irregularities are coming to light.”

Sununu has said he sympathized with and supports citizens of Belknap County. He called for the ouster of Commissioners Dr. David Strang and Peter Ness, by the 18-member Belknap County legislative delegation which appointed them.
Sununu described individuals within that delegation, including its leader Sylvia who floated a bill for New Hampshire to secede from the union, as “crazy.”

There has been much talk about the Free State Movement and libertarians in the debate over Gunstock.

Sununu said Wednesday that a few individuals have maligned the Free State movement.

“I don’t have any problem with the Free State movement. Those are libertarians. Those are folks that moved here in the last 20 years as part of an opportunity for a more limited government and less government in their lives. I am all for that,” Sununu said.

The 18-member Republican-only Belknap County legislative delegation has the power to appoint the five-member Gunstock Area Commission. A group has formed to save Gunstock from what it calls “political extremism.”

On Thursday, Sherman announced he would launch a canvass in Gilford to knock on doors and work to unseat the state representatives “who shut down Gunstock Mountain Resort. It’s a critical part of Belknap County’s economy and a cherished recreation center for people throughout New Hampshire, and it’s been shut down by political extremists.”

“Politicians like Chris Sununu had courted them for years when it was politically convenient, but now it’s time to vote them all out of office,” Sherman said.

The state primary is Sept. 13 and the state general election is Nov. 8.

State Rep. Tim Lang, R-Sanbornton, posted on Twitter that he was hearing from small businesses who are being hurt by the closure, former employees who want to get back to work, and county officials who are concerned that the closure of the profitable recreation area could affect property taxes in the county.

Lang is running for state Senate District 2, a seat held by the outgoing Bob Giuda of Warren, also a Republican.
The two attempted to get legislation passed this year that would have allowed the voters of the county to select the Gunstock Area Commission rather than it being appointed by the members of the legislature who are elected every two years.

Giuda warned on the Senate floor this spring that Gunstock was being taken over by political extremists.
Former New Hampshire Democratic Party chair Kathy Sullivan also took to Twitter to say that she was hearing that season pass holders for the coming ski season have been asking for refunds, fearing the ski area will not open with no management team and that some state representatives are asking for “Free Stater Rep. Mike Sylvia” to go.

A meeting of the county delegation is tentatively set for Aug. 8.