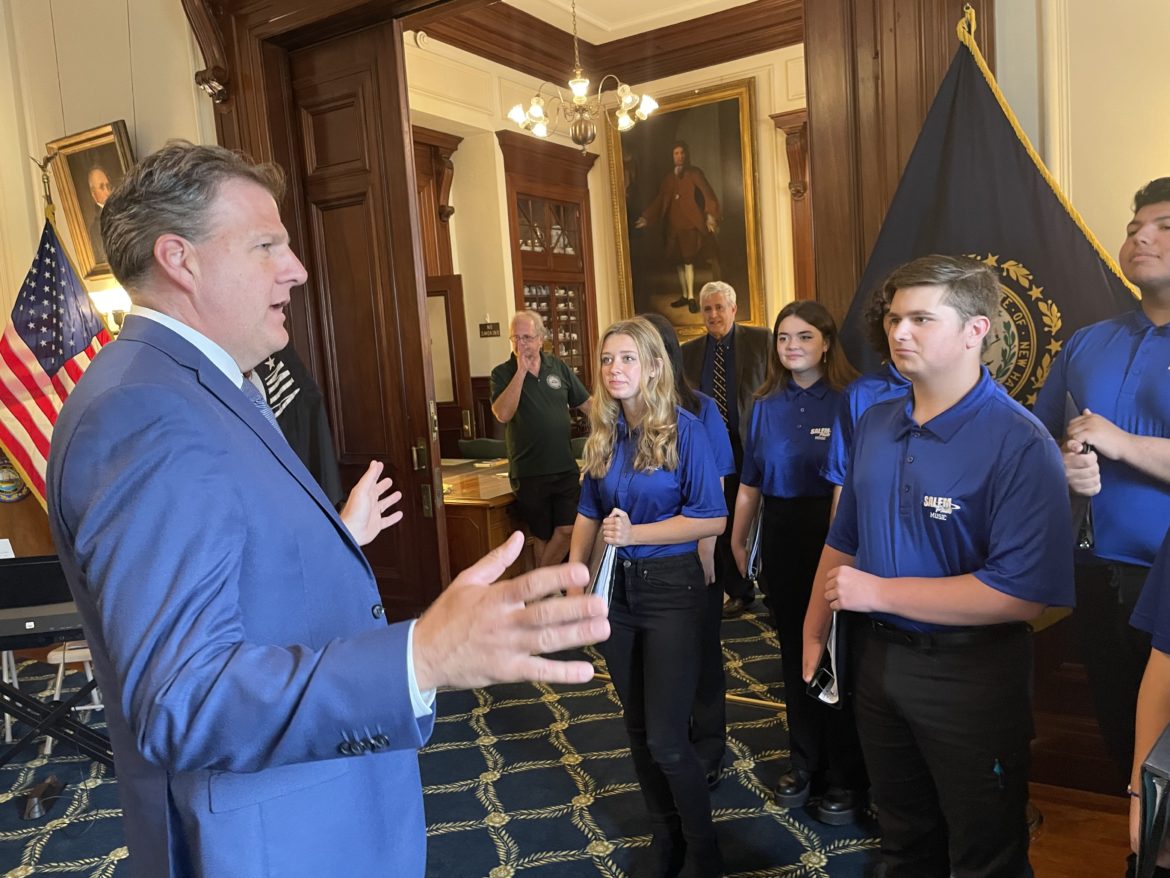 There were recommendations to parents to reach out to their pediatricians to help them source the vital food for infants, while the governor and commissioners said they are being proactive to defend against any gun violence in schools.

Gov. Chris Sununu said during a press conference after the meeting he sees no need to change gun laws in the state.

In the wake of last week’s school shooting in Texas, both commissioners of safety and education addressed councilor concerns about school preparedness and threats.

All schools in the state have emergency preparedness plans which are reviewed periodically, they were told.

Commissioner of Safety Robert Quinn said with the focus on every single school in the state, plans are only as good as those who are familiar with them.

Quinn said he met in the past few days with leaders of the State Police, E-911 and there has been a lot of work done and continued training is underway.

He said there is “no higher priority right now” than to ensure student safety.

Commissioner of Education Frank Edelblut said the state is not being reactive to this “but realizing this is a threat already and being ahead of that.”

Councilor Cinde Warmington, D-Concord, asked whether loopholes in gun background checks in New Hampshire would help, including those who buy at gun shows who do not need to go through such checks.

“Do you think part of a solution would be limiting access to assault weapons?” she asked Quinn.

“Obviously, there is a lot of discussion on assault weapons, and those with a bad intent,” Quinn said.

Information sharing is critical, he said, and noted that regional information on those who may pose a potential threat, working along with the FBI, and basic awareness and reporting are critical.

“It is going to be a team effort,” Quinn said, noting everyone must be vigilant and work with safety plans.

If something seems suspicious or wrong, “just report it,” Quinn said.

Sununu said as a parent, “it hits you hard, I don’t think anyone wasn’t hugely affected by what they saw down there,” in Uvalde, Texas where 21 were killed, including 19 young children.

New Hampshire has not suffered such a horrendous tragedy, but Sununu said the state has taken “a very aggressive approach.”

He said a task force put together 60 recommendations for safety in schools and it is reviewed and updated for every single school.

BABY FORMULA
The state has about 2,000 children in its federal Women Infants and Children program who need the formula and there is a 40 percent shortage of the product on the shelves.
State health officials are monitoring where there are shortages in the state and are working to ensure babies have the food they need.

Sununu said the federal Food and Drug Administration has been a “disaster” on this subject and if he could get in a car and drive to Quebec for the baby formula he would, but he can’t because the federal government won’t allow him to distribute it.

Labeling requirements are holding up importation from Canada because of the metric system and the dilution numbers need to be changed, said Warmington.

Lori Shibinette, commissioner of the state’s Health and Human Services Department, said that is true but two planeloads of baby formula from Europe have arrived and are authorized for use here and are helping ease the supply chain issues.

Shibinette advised if an infant is on a very specific diet and needs formula it is important not to dilute what they have.

The nation is at least a couple of months out from getting domestically produced formula back on the shelves, Sununu said.

The problem, in part, has been the shut down of a large producer, Abbott, which closed in October, Sununu noted.

Health and Human Services officials are in contact with grocers to find where there are gaps on shelves.

Executive Councilor Joe Kenney, R-Wakefield, started the conversation by asking for advice on what he should tell constituents who are searching for the formula.

He thanked the governor for joining with 17 governors and asking the FDA for help.

DHHS officials said residents should start with pediatricians who may have samples or substitutions and can access some through hospitals.

GOVERNOR FOR A DAY
Madelynn Dinan, 12, of North Hampton was governor for the day.
She sat at the governor’s desk during a press conference, took copious notes during the council meeting, and stood by the governor’s side as he individually welcomed fourth graders to the State House Wednesday.

Sununu asked her for advice on a Transportation Department contract, asking her if the school bus ride on that particular road was too rough, but she said, “no” that it was a normal road and reasonably OK ride.
Dinan won a competition to be governor for the day.

TABLED MEDICAID CONTRACT
The council tabled a $1.1 billion contract for health care services for about 240,000 residents now enrolled in the New Hampshire Medicaid program for the year 2023.

The council received a report from Henry Lipman, who manages the program, and the council plans to go over that information before a final vote.
The contract is with the AmeriHealth Caritas New Hampshire Inc. of Philadelphia; Boston Medical Center Health Plans Inc. of Charlestown, Mass.; and Granite State Health Plans Inc. of Bedford.

“We’ve got a couple of weeks to dive in,” Sununu said of the report which numbers over 1,400 pages.

ROUTE 93 EXIT 4A CONTRACT COMING UP IN TWO WEEKS
The long-awaited contract for Exit 4A on Interstate 93 is expected to come before the Executive Council in two weeks, Commissioner of Transportation Victoria Sheehan told the councilors.
This has been an issue that Executive Councilor Ted Gatsas, R-Manchester, has been eagerly anticipating and through his constituents has been pushing to get moving as traffic in southern New Hampshire is increasing post-pandemic.

66 COMMUNITIES DIDN’T APPLY FOR FEDERAL MONEY
A deadline to apply for federal money offered to fund safety and emergency equipment for municipalities is coming up this week and there are 66 communities that have not applied, despite efforts to reach out to them, Taylor Caswell told the council.

PARKS DIRECTOR TO RETIRE
Phil Bryce has indicated he will not seek another term as parks director but will stay on for the summer.

Sarah Stewart, commissioner of the Department of Natural and Cultural Resources, said she will launch a rigorous process to find a replacement this summer and thanked Bryce for his willingness to stay on for a few more months.
The successful candidate “will have big shoes to fill.”

Dams to be helped are state- and municipally-owned and no private dams will get funding.
About $30 million will be used to fix dams in Laconia, Canaan, Alton, Odell, Nottingham, New Durham, Milton, Pittsburg, and Northwood.

About $5 million will be allocated for grants to municipalities for the rehabilitation of municipally-owned dams.
The legislative fiscal committee must also approve the contract.