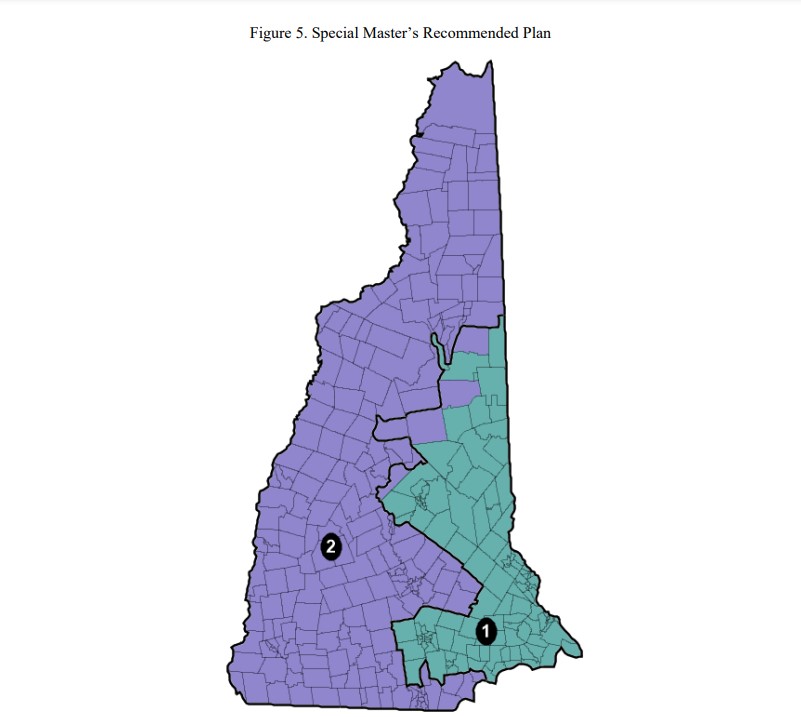 The court rejected a motion by Senate President Chuck Morse and House Speaker Sherman Packard filed late Thursday to stop the release of the master’s report and to dismiss the suit brought by five state voters including former House Speaker Terie Norelli.

Oral arguments on the master’s report will be held Tuesday at 9 a.m. at the Supreme Court.

The recommended plan does not make major changes in the two districts as did plans proposed by Republicans on the House Special Redistricting Committee.

The two plans approved by the House and Senate that Gov. Chris Sununu said he would veto, move between 35 and 40 percent of the state residents from one congressional district to the other.

The plan approved Thursday by the House and Senate down party lines would have the state’s two U.S. Representatives, Ann McLane Kuster and Chris Pappas, in the same district.

In his veto messages he said the bill is not in the best interest of the citizens of the state.

“The citizens of New Hampshire will not accept Senate Bill 200, which moves both members of Congress into the same district. Also, by moving Manchester into Congressional District 2 we would be creating a single district dominated by our largest urban areas,” the governor wrote. “House Bill 52 is not in the best interest of New Hampshire. Granite Staters’ expect districts that hold our incumbents accountable so that no one elected official is immune from challengers or constituent services.”

Special Master Nathaniel Persily noted his plan moves the least number of voters from one district to the other to achieve equal population in the two districts.

The plan “complies with the constitutional requirement of one-person, one-vote, and the Court’s directive to draw districts ‘as equal in population as practicable.’ The Special Master’s Plan achieves the lowest deviation possible: a single person,” Persily writes in his report.

He notes courts have a higher threshold than do legislatures in drawing the political boundaries, noting the Supreme Court in 1969 rejected a court-drawn plan that had a deviation of one percent.

He notes the state court’s order limits consideration for drawing the districts to what is legally required and the concept the court used previously of “least change.”

The 2020 US Census indicates that District One has 17,945 more residents than District Two, and the plan developed by the special master moves 8,973 people from one district to the other, by moving the towns of Albany, Campton, Jackson, New Hampton and Sandwich from District One to District Two.

In four of the five towns, President Joseph Biden won with former President Donald Trump winning only New Hampton in the 2020 general election.

Persily notes New Hampshire is the last state in the union to finalize its congressional districts.

“With only two districts, relatively little population shift over the past decade, and a limited number of legal constraints as compared to other states, one might be puzzled as to why this process is ‘going down to the wire,’ requiring court involvement,” he writes. “Although court involvement may be an ‘unwelcome obligation,’ Connor v. Finch, 431 U.S. 407, 415 (1977), it remains an obligation nonetheless if one-person, one-vote is to be respected and the state fails to remedy the malapportionment in the existing map.”

The original map approved by lawmakers for congressional districts was shaped like a thumb in the middle of the state and would have created a Republican and a Democratic district that Sununu rejected saying the districts should be competitive not foregone conclusions.

He suggested a change that would have made District One more Republican but retain more of the current districts, but the House Special Redistricting Committee rejected it and instead proposed the map approved Thursday that would have put the two US Representatives in the same district.

Democrats on the redistricting committee proposed moving the town of Hampstead from District One to District Two, but that was not approved by the committee.

The Republican leadership’s motion notes Senate Bill 200, which contained the congressional plan approved Thursday by lawmakers, was sent to the Secretary of State’s Office that day and was intended to go to the governor by Thursday evening.

The governor has five days to act on the bill he said he would veto.

The Republican leaders asked the court to withhold the special master’s report until the governor takes action and not release it as it might influence the governor’s decision.

“Essentially, the Court’s plan would directly compete with SB200 in the political arena, causing the Governor to consider the Court’s plan against SB200, thereby hindering the constitutional legislative process,” they argue.

But they said they would prefer the court to dismiss the suit.

The court rejected their arguments and denied the motion and set oral arguments on the report for Tuesday.

The original suit over the congressional districts was filed in Hillsborough Superior Court South, but the Supreme Court took over jurisdiction due to the time constraints until the filing period for candidates begins Wednesday. The final period ends June 10.

A similar suit challenging the redistricting plans for the state Senate and Executive Council districts was filed earlier this month in Hillsborough County Superior Court South.

The suit seeks a preliminary injunction to stop the use of the new districts which the plaintiffs claimed are gerrymandered to give Republicans an unfair and illegal advantage.

Those plans were signed into law by Sununu after passing the House and Senate on mostly party line votes.

States’ political boundaries have to be redrawn every 10 years after a US Census in order to maintain the one person, one vote principle.