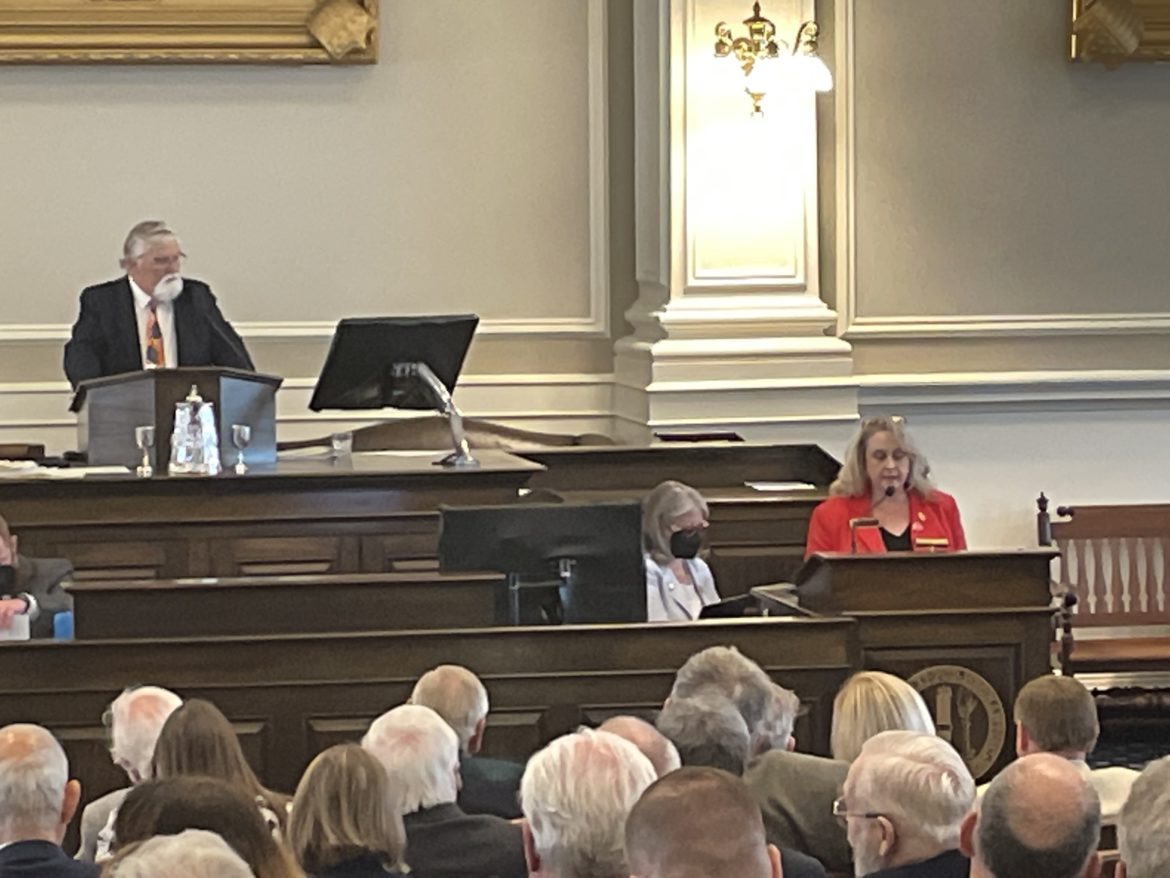 CONCORD, NEW HAMPSHIRE – Today, House Republicans attempted to silence a Democratic attempt to honor American victims of gun violence and the first responders and law enforcement who respond to tragedy. While the ability for the speech to continue was put to a vote, ultimately Rep. Debra Altschiller’s (D-Stratham) ability to deliver remarks prevailed. Printed below are the unanimous consent remarks she delivered to the body:

“Resilience is hard. I have an inner flame of hope, a faith in people, and a vision of better tomorrows. This flame fuels my public service.

Winds of despair almost distinguished my flame of hope on Tuesday, almost.

Yesterday, I was in a Seacoast area high school talking with the head of counseling. They told me the school used to have 9 scheduled fire drills during the school year. Now, they have 5 fire drills and 4 active shooter drills.

Like many of you here, I have both worked in school, for me it was a Seacoast elementary school where I volunteered as a room parent, coach, scout leader, and activity chaperone. When as an adult you participate in one of these drills it is painful to be with the students as they huddle against a cement wall away from the windows and doors.

As a parent, I have felt the fear of calling my child’s cell phone to hear their voice when I got word the supermarket they were in had a man waving a gun around the parking lot right outside where they were shopping.

We don’t have gun policies in this state. We leave our fate to chance.

Leaving our fate to chance means anything is possible, anything can happen. We are rolling the dice on our children’s safety.

Our policy on gun violence prevention is to depend on luck. It’s not good policy because luck is capricious.

We are only 5 months into the year and 27 American schools have experienced shootings. Last year there were 34 – and schools were closed for a significant portion of the year because of the COVID-19 pandemic. 8 more school shootings and the record is broken.

But the unlucky aren’t only limited to schools, you can be unlucky shopping for groceries, praying in a synagogue or at church, playing ball on a field, attending a music festival, hearing an elected official speak outside, at the movies, the possibilities are endless. In America, on this 147th day of the year we have experienced 213 mass shootings.

No doubt by now everyone has heard the names of the murdered children, teachers, grandparents, security guards. It’s really important to honor their memories, may they be a blessing.

In just the past 147 days, thousands of EMTs, firefighters and law enforcement have rushed to the bloody crime scenes. Unfortunately the continuous pictures, biographies, the stories from the relatives of the murder victims have no impact on some hearts in this chamber. So what if today, right now we acknowledged the survivors and the responders?

The 911 dispatchers who field the calls of terror from the terrorized, and send help. We know the haunting sounds of the voices of the victims and background noises of active crimes can never be unheard.

Let’s acknowledge the firefighters and police who race into places people should be racing out of. Securing crime scenes and bearing the burden of having to try to quickly discern who is friend or foe during calamity.

Think of the EMTs working  to restart hearts that have stopped, plugging gaping wounds, tightening tourniquets to save limbs, encouraging our loved ones to just hang on as you race them to the hospital.

The Emergency room staff who whisk the gurneys of the bleeding and broken into sterile rooms and use all of their medical education and training to fix what has been blown apart. The doctors and nurses who work valiantly to save lives and keep us updated in waiting rooms as we suffocate from worry and despair.

Let’s remember the custodians who have to pick up the computers, backpacks, lunchboxes, overturned shopping carts and prayer books so the crime scene cleaners can come in and scoop up the mounds of flesh and wipe the blood stains off the walls and floors.

Think about the unlucky journalists who cover the scenes of the unlucky over and over again. The words seem insufficient and the photos shockingly familiar.

If the ones left behind are lucky enough to access mental health care will they be lucky enough to find someone who can shine a little tiny bit of light into the deep and enveloping pain of the dark places survivors are thrust into.

Some survivors are lucky to be the recipients of meal trains where friends and neighbors bring food. Even the most lovingly prepared meal cannot fill the empty place at the table.

Teachers Eva Mireles and Irma Garcia came to school two days ago to teach and drew their last breath trying to protect their students from the unluckiness of being the classroom chosen by a mass shooter.

Counting on luck is not good public policy! The tragedies we see everyday show how the odds are stacked against us. We need to act. Now. We have passed gun violence legislation in this House before, not letting thoughts and prayers be drowned out by the gunfire. It wasn’t luck, it was hard work.

We need more people to work to make our communities safe from gun violence. To lead, to stand up for safe schools and communities so teachers, grocery store clerks and clergy don’t have to defend themselves as if they are in a theater of war. Our schools, places of worship, stores and concert venues should not be the killing fields we have allowed them to become. Life or death cannot be left to chance.This House has passed gun violence legislation before, not letting thoughts and prayers be drowned out by the gunfire.  It wasn’t luck, it was hard work, let’s do it again.

We, in this House, have the power to protect innocent lives. Let’s not leave our fate to chance. Let’s join together in love and respect for our fellow New Hampshire citizens to reduce the chance that innocents will be gunned down in senseless slaughter. We can reduce the chance of tragedy, but only if we act.”