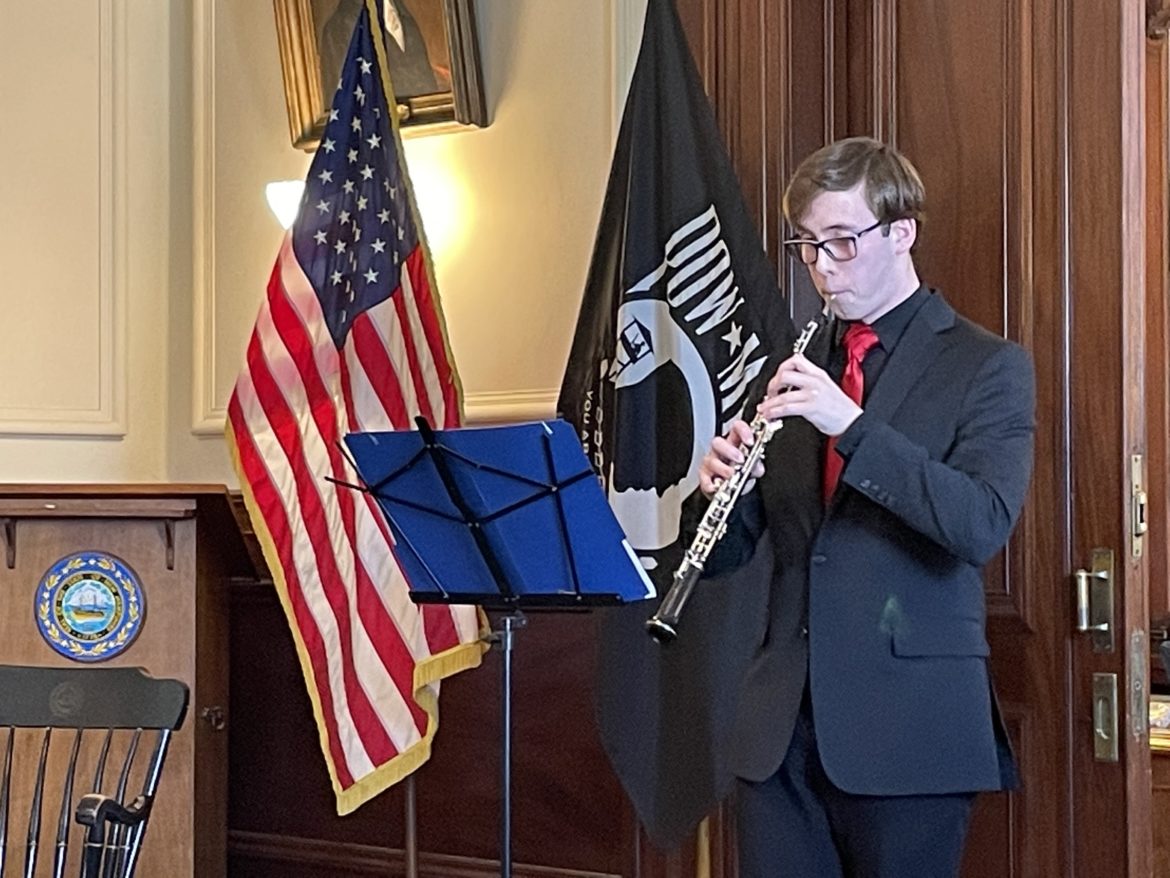 Brady Stanton of the Concord Music School plays the oboe for the Governor and Executive Council Wednesday.

CONCORD – The closure of five part-time Planned Parenthood of Northern New England health centers, including one in Claremont, and whether the Executive Council is responsible for the loss of access to rural reproductive health care were debated between Gov. Chris Sununu and Executive Councilor Cinde Warmington at Wednesday’s meeting.

Warmington charged that the Council’s repeated 4-1 vote to oppose family planning contracts for providers that also deliver abortion care in the state – despite the fact that the law does not allow public funds to pay for such procedures – is in part to blame for the closure of the centers.

The Council’s lone Democrat has been the only member to support the contracts.

She asked the governor if he had asked other councilors about bringing back the contracts and voting again and he said he had heard of no movement among the majority to reconsider their vote, despite being in contact with them.

Sununu, a Republican who has supported the passage of those contracts totaling just over $500,000, and including two other independent reproductive health care centers in New Hampshire, said it was his understanding that the withheld contracts had nothing to do with the PPNNE decision.

Lori Shibinette, the commissioner of New Hampshire’s Department of Health and Human Services, said it was also her understanding that it was part of a larger, strategic decision on the part of the organization and she had no specific information that the closure was related to the contracts. But she did note that women will have to go as far as Keene and to Vermont to get services which will end in Claremont on June 12 and confirmed that there are no abortion providers in Executive Council District 1, the largest and most rural.

The Claremont health center does not provide abortion care; the next closest PPNNE health center is in White River Junction, Vermont.

Last week, Planned Parenthood of Northern New England announced its decision to close five health centers and expand days of operation at seven health centers “to ensure the organization is sustainable and able to meet the needs of the region, patients, and staff long term.”

In a press release, PPNNE stated it will expand the days of operation to a minimum of four or five days per week at all other health centers and will continue to operate its telehealth program, which has grown tremendously throughout the pandemic.

“To rise to the moment that we are in, we have made the difficult but strategic decision,” said Kai Williams, senior vice president of health care delivery for the organization. “Our patients and our long-term ability to provide care are at the center of every decision we make, which is why we also plan to expand hours at seven additional health centers. We believe these decisions will ensure that we can continue to serve northern New England for generations to come.”

PPNNE will expand its days of operation at seven locations: Barre, Brattleboro, and Williston, Vermont; Exeter, New Hampshire; and Sanford, Biddeford, and Topsham, Maine. The expansion of these health centers will take place over the course of the year. There will be no changes in operating hours at Burlington, Rutland, St. Johnsbury, and White River Junction in Vermont; at Derry, Keene, and Manchester in New Hampshire; or at Portland, Maine.

CHAIR OF BOARD OF PSYCHOLOGISTS QUITS
The chair of the New Hampshire Board of Psychologists has resigned, citing the state’s appointment of the board’s professional conduct investigator who was involved in the Bush Administration’s “enhanced interrogation” program of prisoners following the terrorist attacks of 9/11.

Dr. Gerard Koocher has worked at the highest levels of the American Psychological Association and with the Central Intelligence Agency and Department of Defense and was the subject of concern for Dr. James Beauregard, a clinical neuropsychologist who has chaired the state board.

In his letter to Governor Sununu and the Council, he said his appointment is “inappropriate” for the state.

He argued in his 17-page letter of resignation that torture is not only wrong, but it also doesn’t work. Beauregard said the state Office of Professional Licensure did not give the board the opportunity to provide input into the hiring process for Koocher.

The Board of Psychologists regulates all psychologists, including school psychologists. The board currently has three of its nine seats vacant and the next public meeting is June 3.

The letter of resignation, signed May 6, and approved by the Executive Council, Wednesday, came on the day that the governor proclaimed May Mental Health Awareness Month.

Warmington asked for a future meeting with the Office of Professional Licensure to discuss the appointment of Koocher and the governor agreed.

Asked if the resignation of Beauregard was effective immediately or at the end of his term, Sununu said Beauregard “technically resigned in the middle of a meeting.”

In his letter of resignation, Beauregard said, “torture is a moral evil that cannot be condoned under any circumstances.”

Attempts to reach Koocher, of Cambridge, Mass., were unsuccessful.

COVID-19 EQUIPMENT STORAGE AND TEST FUNDS RETURNED TO GOFERR
The Council approved a $4 million contract to store personal protective equipment against COVID-19 at Concord Litho through 2027 and also accepted $833,613 back from the Liquor Commission for sales of COVID-19 tests.

The Council was told that the money for the tests will return to the Governor’s Office For Emergency Relief and Recovery (GOFERR), which has distributed federal COVID-19 relief funds.

Joe Mollica, liquor commission chair, said due to the fact that such tests are now available at many retail establishments and are offered for free through various means that the liquor store will not restock and will likely exhaust its supplies by the end of June.

The Council also approved an amendment to an existing contract with UNH to provide COVID-19 testing and also approved $361,144 to support municipalities and state agencies with activities related to relaxed COVID-19 restrictions and $89,367, particularly for the Town of Hooksett, using federal funds.

NEW ENGLAND APPLE MUSEUM
Republican Executive Councilors Joe Kenney of Wakefield and David Wheeler of Milford opposed a request to authorize the Division of Agricultural Development to enter into a grant agreement with the New England Apple Association, Hatfield, MA, in the amount of $33,947 to develop and conduct a feasible study regarding the establishment of a New England Museum of Apples and Cider.

The motion did, however, pass on a vote of 3-2. The contract is effective now through September 1, 2024, using federal funds.

INVEST NH HOUSING INCENTIVE FUND
Who gets to decide on who gets $100 million to help support the construction of low to moderate-income housing is a question that has not yet entirely been answered.

The governor was able to get the Council to approve federal funds for the one-time program two weeks ago but it still does not have a new director and the manual on how to decide who gets the competitive grants is not complete, said Taylor Caswell, who is heading up the GOFFER and is commissioner of the state Department of Business and Economic Affairs.

Caswell said it will be at least a month before those questions, posed by Executive Councilor Ted Gatsas of Manchester and others, can be answered.

There will be $100 million available in various programs starting this summer to help increase the number of units of low-income housing and the final approval for the projects will be before the Executive Council.

The lack of housing availability, under 1 percent, is impacting business growth, the governor said.

LOTTERY MARKETING AND TOURISM ACCOUNTS
The Lottery Commission has a contract with GYK Antler of Manchester in the amount of $8,025,000 for the purpose of marketing and advertising state lottery games, for a period of three years from July 1, 2022, through June 30, 2025. The money is coming from lottery Funds.

The Council also approved Joint Promotional Grants for a number of nonprofit groups that hold events that attract tourism.