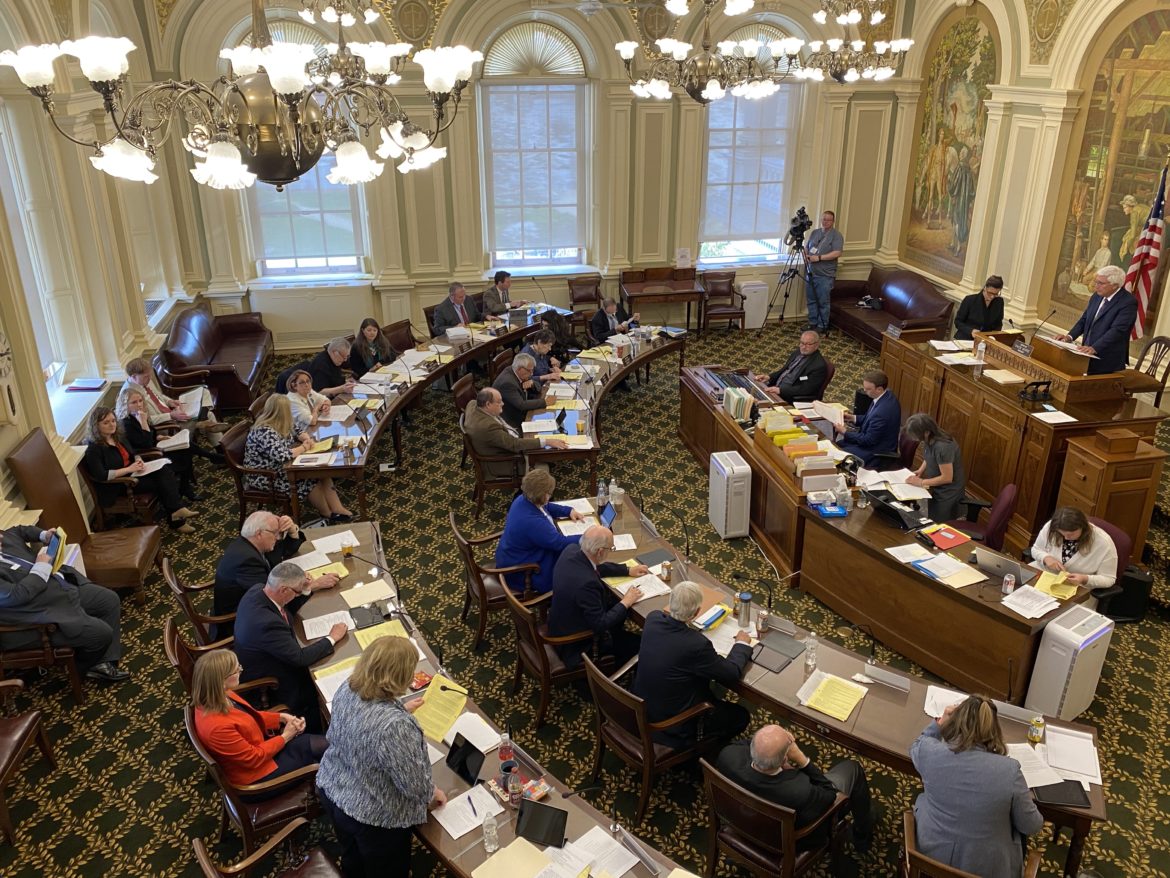 The Republican-sponsored ban prohibited abortions beyond 24 weeks and required those seeking an abortion to submit to an ultrasound at every stage of pregnancy. The bill clarified when an ultrasound would be necessary and made exceptions to allow abortions for cases of fetal anomalies incompatible with life.

During testimony on the bill, senators spoke of the women who came forward with stories of some of the wrenching decisions they faced when learning that their child would not likely survive.

Sen. Rebecca Whitley, D-Hopkinton, said, “I want to share my deep gratitude to all the women who have bravely shared their personal stories with us to paint a clear picture of what it is like to endure these complex situations later in pregnancy and show us why it is critical that they and their medical providers have options. … We know that there are many more women who have these deeply personal stories who may not be comfortable attending a public hearing, who can attest that, yes, these circumstances are rare, but they happen to real families, real Granite Staters who need to be able to make these decisions with their family members, their clergy, and their doctors.”

Sen. Regina Birdsell, R-Hampstead, opposed the bill, saying there are unanswered questions, including the definition of “incompatible with life.” She noted that one mother whose child had been deemed incompatible with life chose not to have an abortion and the girl is now 14 years old.

“I understand the rationale behind this bill, and I understand the hard decisions that have to be made,” Birdsell said. “However, there are way too many questions, and I don’t believe this bill is ready to be put into law.”

After passage of the bill, ranking member Lucy Weber, D-Walpole, of the House Health, Human Services, and Elderly Affairs Committee, said, “Today is a win for reproductive health care in New Hampshire. The provisions in HB 1609 more clearly define the ultrasound mandate and exempt fetal anomalies as an exception to the Republican abortion ban.

“To be clear, the best result would be an outright repeal of the abortion ban included in last year’s state budget. However, the steps taken last month by the House and today by the Senate are critical for Granite Staters facing difficult decisions.”

Sen. Jay Kahn, D-Keene, said, “The public hearing on HB 1609 was one of the most powerful hearings I have ever been a part of. The stories shared by Granite State women, families, and medical professionals emphasized the very real fact that every pregnancy is unique and that mothers and families need compassion and flexibility to make these extremely personal medical decisions.”

Planned Parenthood’s Kayla Montgomery said: “The public outcry since this cruel abortion ban took effect has been deafening; all lawmakers should be listening as they consider future efforts to restrict access to abortion care.
“Today we also lament that these women were forced to bare their scars for lawmakers who refused to listen to medical providers and patients last year when they tacked an abortion ban and ultrasound mandate onto the state budget. As their stories have illustrated, real people have been needlessly harmed by this law,” Montgomery said.

Bathrooms And Marriage
Sen. Kevin Avard, R-Nashua, successfully introduced an amendment to HB 1130 that he admitted would not seem to be relevant on its surface. HB 1130 makes provisions for people with certain conditions to be eligible to use employee bathrooms. Avard’s amendment allows a person in hospice care to obtain a marriage license without appearing in person before a city clerk.

Avard said his amendment came as the result of an encounter with a constituent who lived just two blocks from City Hall but was unable to get to the clerk’s office because of being under hospice care.

“This person has been with a lifelong partner forever,” Avard said, “and he wanted to get married.”

Avard offered to go to the clerk’s office to represent him, but learned that office policy prevented that.

“And I said, so that person is about to die, and is two blocks away, and your office policy is that you can’t do that,” he said.

The amendment would allow a justice of the peace to act on behalf of the clerk to verify the information and get a signature on a marriage license.

The original bill, according to Sen. Tom Sherman, D-Rye, would require that retail establishments provide rest room access to persons with conditions such as Crohn’s disease and ulcerative colitis.

“The committee heard deeply personal and moving testimony about the struggles that individuals who suffer from such conditions go through every day for any task that takes them outside of their homes,” Sherman said. “It’s a deeply humiliating experience to be denied access to an otherwise available rest room and be forced to rush to find an alternative option, only to in many cases come up short.”

Sen. Jeb Bradley, R-Wolfeboro, offered an amendment to make sure that accommodating someone would not create a safety risk for the employees.

The bill as amended passed and went to third reading, where it will be combined with other successful bills for a final vote.

The Senate passed a proposed constitutional amendment that would eliminate the office of register of probate. The measure was deemed appropriate because most probate functions are now handled by the courts, with electronic filing.

Opponents argued that the position is an important check on the courts, providing residents with someone to contact with questions and needs for assistance.
It passed on a 21-3 vote and will now go before voters. Passage would require a two-thirds affirmative vote by the state’s residents.

HB 1339 changed the provisions of the Winnipesaukee River Basin Program to make the member communities share equally in the cost of repairs and maintenance of the facilities. The program is a wastewater collection and processing network for communities from Lake Winnipesaukee to Franklin.

A bill that would have allowed state liquor stores to open on certain holiday weekends, such as Easter, was voted inexpedient to legislate after testimony that the expenses might outpace the income from opening on the extra days.

HB 1495 passed, 14-10, prohibiting the state from requiring businesses to impose vaccine requirements. Despite arguments that such edicts had helped to control the spread of COVID-19, supporters of the bill said the state should not interfere with private businesses’ decisions about what is right for their employees.
HB 1335, providing for medical paroles for prisoners, passed.

HB 1360, which would have reduced the penalties for certain drug offenses, was sent to interim study.