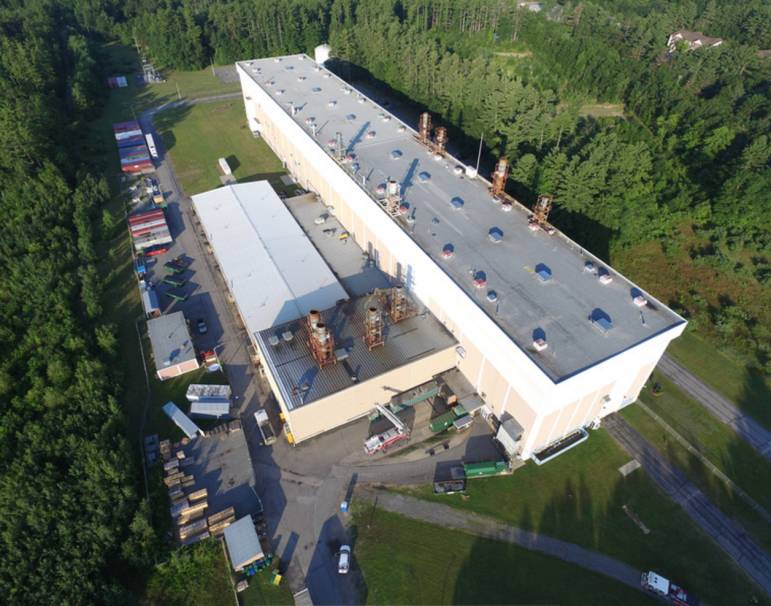 Aerial view of Saint-Gobain in Merrimack.

According to a news release from the DES, following the initial discovery of perfluorooctanoic acid, PFOA, in area drinking water in 2016, which it attributes to air emissions from the Saint-Gobain plant in Merrimack, DES launched an intensive testing effort to determine the extent of the contamination.

“We are pleased that the state and Saint-Gobain were able to reach agreement to provide safe alternate water to approximately 1,000 properties in this five-town area, where private drinking water wells have tested above the state standard for PFOA. The families and businesses occupying these properties will finally get a permanent solution after a long period of relying on bottled water,” said Bob Scott, NHDES commissioner.

“Although this is progress, there remains hundreds of New Hampshire families still on bottled water,” Rung said.

Rung said in Londonderry, many families are living with contaminated water, but their homes are just beyond the boundary where Saint-Gobain must take responsibility.

“If there truly was ‘good faith,’ Saint-Gobain would be supplying them with safe drinking water. For all of them, we must continue to work until families don’t have to fear turning on their faucets,” Rung said.

Saint-Gobain spokesman Peter Clark said: “Since learning about the presence of PFOA in the Merrimack area, Saint-Gobain has taken action on this issue and the term sheet announced by the New Hampshire Department of Environmental Services is another sign of our commitment.  To date, we have installed more than 15 miles of water lines, distributed nearly 500,000 gallons of bottled water and provided permanent potable water solutions to 622 impacted households. Our remediation work will continue, based on the conditions outlined in the term sheet.”

Former state representative Mindi Messmer, an environmental scientist, called it a step in the right direction.

“However, there are still more than one thousand property owners, who live outside of the area addressed in this agreement, whose water has been polluted by Saint-Gobain. In addition, due to Saint-Gobain’s foot-dragging, and drawn-out court actions, we still don’t know how many more homes are impacted either within or outside the Consent Decree area,” Messmer said.

She said there are at least 1,500 homes that may be impacted by their chemicals within the Consent Decree area, who still don’t know if their well is polluted.

“Our study found that Merrimack residents experience higher rates of at least four cancers and chronic diseases than the US rates and demographically similar towns in New England (Messmer, et al., 2022),” Messmer said.

House Speaker Sherman Packard, R-Londonderry, said it “is a positive step in a long, multi-tiered process.”

“The agreement between the New Hampshire Department of Environmental Services (NHDES) and Saint-Gobain Performance Plastics (SGPP) is a good-faith effort to restore clean drinking water to those affected and ensure that all New Hampshire residents benefit from the improvements made to our state’s water infrastructure and through our continuing legislative efforts,” Packard said.

Rep. Rung asked:
“Aside from the homes mentioned in this press release, how many others will remain on bottled water?

“Are there any homes outside of ‘The Ring’ who have water contamination due to Saint-Gobain? How many? What is being done for them?” Rung asked.