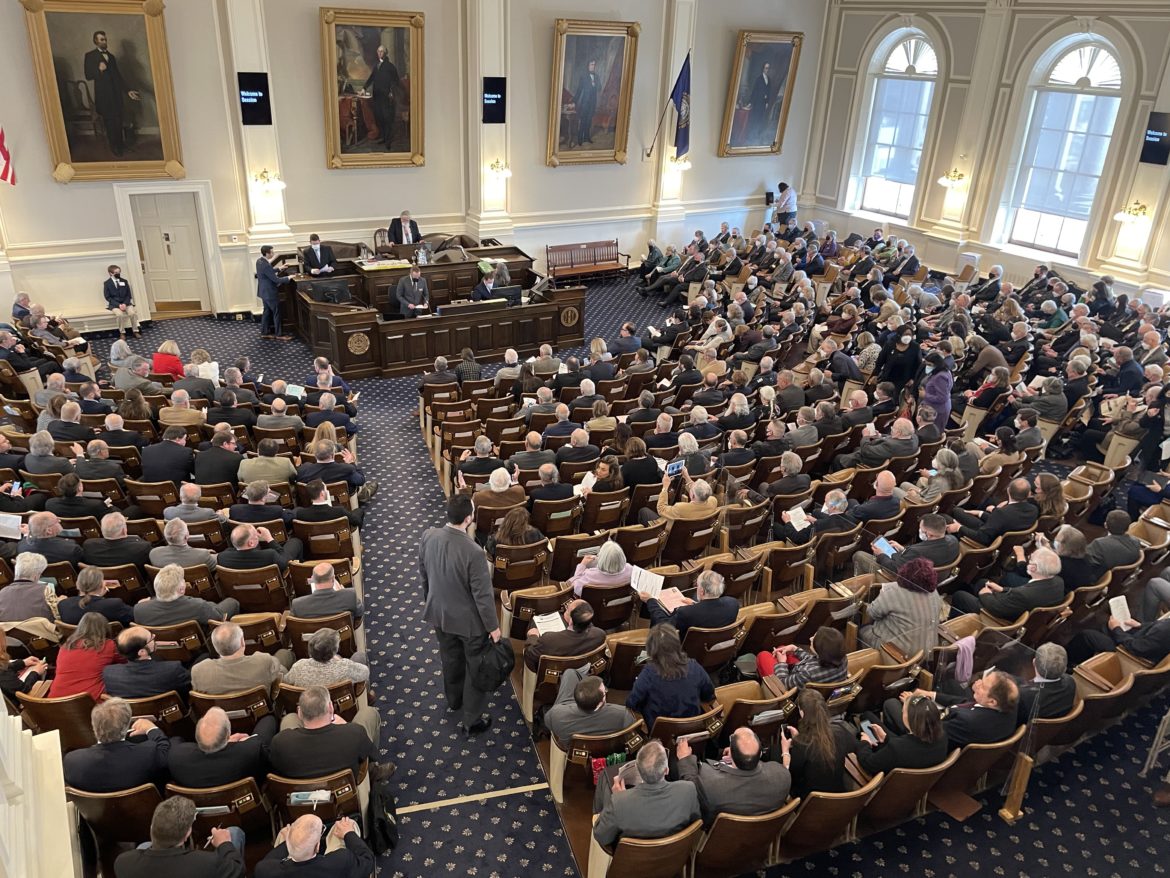 House session held March 10 was the first time members were back in Representatives Hall since the pandemic started. They have met outside, in parking lots, a sports arena and hotel convention center to allow for social distancing before.

CONCORD – At least one House member has tested positive for COVID-19 after attending all three long session days in Representatives Hall this week, according an email sent to some members who sat within a six- to seven-foot radius of the infected member.
The email was sent Saturday morning at 10 a.m. by Aaron Goulette, Chief of Staff of the New Hampshire House of Representatives.

Rep. Bill Marsh, D-Brookfield, who is also a physician, said sending the notice only to members who sat near the infected House member was inadequate.

“Since we know aerosol spread of Covid occurs over longer distances in indoor spaces, especially when people are confined for such long hours over multiple days, I believe the 6-7 foot radius for notifications is inadequate.

“Basically everyone in the room is at risk, and likely many brought Covid back to their communities,” Marsh said. “I still recommend continuous wearing of a well-fitting N95 mask for personal protection.”

“The affected legislator had a household member who tested positive for COVID-19 earlier in the week. The legislator did not use the self-test kit provided by the General Court prior to attendance. No staff, members of the public or press were indicated to have been close contacts,” Goulette said.

The number of hospitalizations due to COVID-19 has been low in recent weeks as were case numbers, although the state has said that number will no longer be accurate because people testing at home may or may not report to the state.

The number of deaths has declined, but from March 11 to March 18, the state reported 20 deaths due to COVID-19.

Tuesday, Wednesday and Thursday were long sessions held in Representatives Hall in the State House and the House only recently began meeting there again. The session day March 10 was the first time in Representatives Hall since the pandemic began because it was considered close quarters giving the 400 members no room to socially distance. Before that, the House met outside, in a parking lot, in a sports arena and hotel center.

“With over 400 people packed into Rep’s Hall, most not wearing masks, and at the current prevalence, it was nearly certain at least one Representative would test positive,” Marsh said.

In the email to close contacts, Goulette said the House member who isn’t identified sat in the general area of Division 4 in Representatives Hall and tested positive by antigen self-test on Friday.

“You are receiving this notification because your assigned seat is within a roughly 6-7 foot radius of the member who has tested positive. The member was present for session all three days (3/15-3/17),” Goulette said in the email Saturday.

He attached the latest guidance from DHHS on isolation and quarantine.

As a non-household contact, DHHS does not recommend quarantine, the email said.

“Wear a well-fitting face mask around other people for 10 days, especially in indoor settings.

If symptoms develop, stay home and get tested for COVID-19.

Get tested for COVID-19 on day 5, even if you don’t have symptoms.

The House and the state DHHS have refused to identify lawmakers or staffers who have become infected with COVID-19 during the pandemic or provide numbers of those infected.

The only way the public usually finds out is if the lawmaker makes a public statement or mentions it on social media.

Republicans and Democrats have been deeply divided over most issues related to COVID-19 with many Republicans in the House refusing to wear masks and others refusing vaccinations.

At least six House members themselves reported getting infected with COVID-19 when transmission rates were much higher at the Jan. 5 and 6 sessions held at the DoubleTree by Hilton in Manchester.

Rep. David Meuse, D- Portsmouth, said over half of those attending the mask-optional legislative sessions go mask-less “despite the fact that people are still dying and being hospitalized.”

“Meanwhile, we’re packed into Reps Hall elbow-to-elbow like sardines sharing the same space on session days for 9-13 hours. This is reckless considering COVID is spread by airborne droplets released by quiet breathing, speaking, and coughing—not to mention 350+ legislators shouting themselves silly during voice votes,” Meuse said.

Meuse said the Speaker provided free test kits prior to sessions, but none are provided after sessions—and after potential exposure.

“There is no requirement to use them or to report positive test results to anyone. Meanwhile, there is zero transparency when it comes to legislators testing positive. The only way we hear about legislators becoming ill with the virus is from each other or from Facebook posts,” Meuse said.

He said many legislators are age 60 and older and have health conditions that make them more vulnerable.

“While our timing for the last three session days seems fortunate with cases and hospitalizations statewide hitting low points not seen since August, cases are rising in Europe and Asia due to the highly transmissible new B-2 sub variant of Omicron. During past surges, we’ve seen the U.S. lag rises in Europe and Asia by 2-3 weeks—which means by the next time we meet on March 31 to debate our remaining bills, B-2 could be starting to have an impact in New Hampshire.

“So yes, I’m concerned. Our ‘look ma, no hands!’ approach to battling COVID seems to have devolved into ‘COVID is over!’—even as people continue to die and be hospitalized due to the current variant and as a new variant waits in the on-deck circle,” Meuse said.

House members are still awaiting a ruling in a federal lawsuit filed by a number of medically at-risk Democrats, including former Minority Leader Renny Cushing of Hampton, last year to allow remote participation citing the Americans with Disabilities Act.

Cushing died on March 7 at his home in Hampton at the age of 69. His obituary in the New York Times said according to his wife, Kristie Conrad, the cause of death was prostate cancer with complications from Covid.

The U.S. District Court judge sided with Speaker Packard, but that decision was overturned by the 1st Circuit Court of Appeals. A rehearing was requested by Packard, was granted and held, but a decision has yet to be released despite a recent request for an expedited ruling.

Marsh said the CDC currently lists every county in New Hampshire as low transmission.
But NH DHHS still lists five counties and Manchester at substantial levels of transmission, with the others as moderate.

“So it is unclear whether public health guidance was followed in planning this Session, but clearly the result is not what anyone would have desired,” Marsh said.