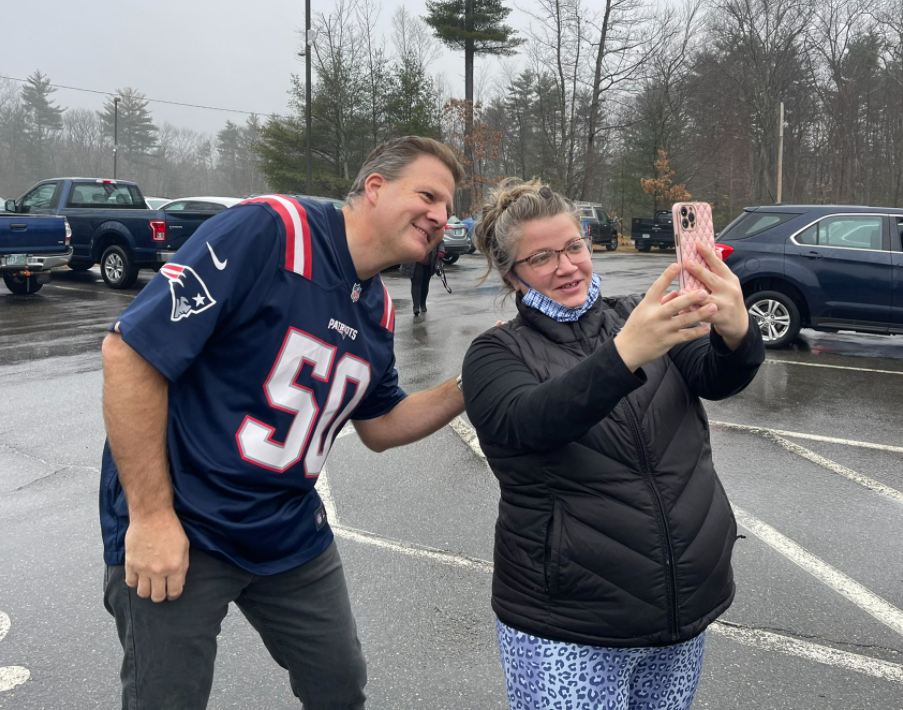 Gov. Chris Sununu is pictured with an unidentified woman Saturday after getting his booster shot at a Booster Blitz in Stratham.

CONCORD – The current surge of COVID-19 Delta variant in New Hampshire was preventable and caused by a lack of leadership that has delayed booster shots and had real health-care consequences, said two physicians who are also top Democratic lawmakers on Wednesday.

They are calling on Republican Gov. Chris Sununu to provide more leadership, as one said he showed during the first 15 months of the pandemic, but seemed to fall short starting in June leaving the state’s residents looking in vain for booster shots and shots for kids before the holidays just as a new variant, Omicron, arrives.

In a Zoom press briefing Wednesday morning, state Sen. Thomas Sherman, a retiring physician and a leading Democrat from Rye, and state Rep. William Marsh, a former Republican and now Carroll County Democrat who earned his M.D. from Dartmouth Medical School, called for more booster shots to be available now, not weeks from now. One Booster Blitz last Saturday which vaccinated 10,500 people was good but needs to be multiplied and replicated en masse to meet demand, they said.

“The most immediate intervention is coming together as residents in New Hampshire to protect all those around us by wearing masks when indoors. We have already seen the impact of this simple intervention in Berlin, with a return to manageable levels of infection within two weeks of masking,” Sherman said. “We should be encouraging our schools and businesses to make the decisions and take the steps that they believe will best protect their students, employees and customers with the goal of keeping their doors open.”

Sherman said that Sununu did a good job for the first 15 months but has dropped the ball.

Neither Marsh nor Sherman said they were calling for a statewide mask mandate, which are now in place in New York and California with lower rates of transmission of COVID-19 than New Hampshire but of a more “granular” approach by town, school, or business. They pointed to the success in Berlin when a recent citywide mask mandate turned around the rates of infection significantly over two weeks easing the burden on local hospitals.

There are hospitals now at 115 percent capacity and they said the numbers are underrepresenting the overall health-care crisis at hand.

Ben Vihstadt, Sununu’s spokesman said: “As New Hampshire faces this COVID winter surge, it is important that leaders in the Democrat party do not politicize the state’s response with press conferences like the one held today. They well know from the Governor’s weekly press conferences that virtually all of the items raised are well underway.  Specifically:

*   They suggested the state bring back more robust fixed vaccination sites. The state did that last week, announcing dedicated state-run fixed sites to administer vaccines and booster doses and plans are already underway to double the amount of fixed sites. School clinics are also underway.
*   They suggested the state do more booster blitzes. A second booster blitz is already underway, with details to be announced tomorrow.
*   They suggested allowing/expanding the use for more treatments like monoclonal antibodies. The state pushed FEMA for more monoclonal antibodies and the state secured an increase in these life-saving treatments which hospitals have already received. More come every week.
*   They suggested adding bed capacity. The state already did that, with an executive order last month opening up flexibilities to allow for internal surge centers, strike teams to open up beds at long term care facilities, and FEMA staffing teams that have helped opened up beds within hospitals.
*   They suggested a mask mandate. Over 40 states do not have mask mandates, and Republican and Democrat governors alike agree that a mask mandate is not the way out of this pandemic.”

“Berlin and Gorham each instituted their mandates on the same day and both let them sunset on November 30. In a 36-day time period, we went from 280 plus to about 29 (cases) valley-wide,” Grenier said. “There has been a slight uptick recently and we’re keeping a close eye.”

In looking back, Grenier said there was a real crisis. “Androscoggin Valley Hospital was overrun with COVID, if we were to have had an emergency of any kind, being a multiple-victim accident or any natural catastrophe, our health-care system would have been unable to respond. The mandate worked not only because it helped to prevent further spread, but it raised such an awareness in the community that there was little pushback. We may have to do it again if the area sees another spike of that magnitude and seriousness. It will be the last resort. I hope with the new strain any outbreak we may experience people need to heed the advice of Dr. Benjamin Chan and local healthcare providers,” Grenier said.

Sherman said Sununu and the Executive Council left New Hampshire “defenseless on Delta” due in large part to the Republican-controlled Executive Council which voted in the fall to table then deny $27 million in federal funding for vaccinations. Sununu supported the $27 million.

This delay is now being seen in hospitals from one end of the state to the other and now until January in some cases, as people are waiting in line for a booster shot at the pharmacy or health-care provider, Sherman said.

The state Department of Health and Human Services was “clearly not given the resources,” until Nov. 19 when the council relented and approved federal money.

What can we do about it now?

Sherman said, the first thing is that people must exercise their “individual responsibility” to protect others by wearing a mask indoors. Vaccinations must be universally available now, and for those who are ill, getting intervening medicine to prevent hospitalizations is crucial, he said.

A member of the state’s reopening task force, Marsh worked with other leaders on protocols and guidelines to safely reopen various sectors of the economy.

After last January’s peak, Marsh said, the guidelines of the reopening task force “were rolled back and then converted into recommendations with no provision to reinstate them should we experience another COVID wave like the one we are in right now. Consequently, even though COVID right now is worse than it has ever been in New Hampshire, even though Dec. 1 we became the state with the highest number of COVID cases per capita, even though our hospitals are on the verge of collapse, precisely the scenario the state of emergency of March 2020 was intended to prevent, we are not addressing the problem.”

Marsh said it would be important for the state to track the number of people who are now immune to COVID-19, which he believes is in the low 20 percentages by his calculation.

Sununu has also taken heat because of comments he made on Sunday’s Meet the Press that wearing a mask was like being put in the “penalty box.” See story here: https://indepthnh.org/2021/12/14/sununu-gets-heat-over-mask-remarks-and-vaccination-delays/