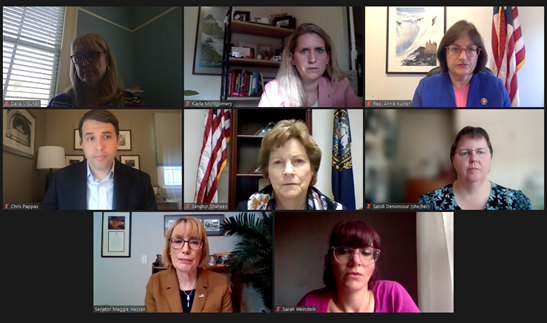 The Supreme Court will begin oral arguments on Dobbs v. Jackson Women’s Health on December 1 in what’s described as the most influential abortion case in nearly 50 years – a decision which would pave the way for states to criminalize abortions. If the Court overturns Roe v. Wade, eighteen states will immediately ban abortions in their state.

“I’ve lived the consequences of the pre-Roe era – I had friends in college who were forced to seek dangerous back alley abortions because women across the country were denied access to critical family planning services. We cannot allow Republican lawmakers to turn back the clock on women’s reproductive health and rights, which is precisely what the Mississippi case seeks to do. It is time to sound the alarm,” said Senator Shaheen. “Roe v. Wade isn’t just a decision that impacts women, their health and their financial security – it also impacts generations of families. And it’s devastating to see that extreme ideology find its way to the New Hampshire State House, first through the budget that the Governor signed into law and more recently with the Executive Council’s decision to deny crucial funding to the providers that offer the majority of family planning services in the Granite State. I never thought I’d see these types of gross privacy violations and blatant infringement on women’s personal health decisions find their way into the ‘Live Free or Die’ State. No lawmaker has any business telling women when or how they can start a family. There is so much at stake with this case, which is why Granite Staters and Americans across the country need to make it clear that they will not allow Republicans to undo the progress we’ve made over the last 50 years.”

“The case ahead of the Supreme Court is a direct attack on decades of precedent set by Roe v. Wade. This is one of the most extreme abortion bans in the country and it would take us back to almost 50 years ago,” said Senator Hassan. “The result would be devastating for women and the Supreme Court should not put government in front of women’s most personal, difficult, and complicated health care decisions. I’ll continue working with my colleagues to protect the rights enshrined in Roe v. Wade and to help ensure that all women have the individual autonomy that is critical to their ability to thrive and critical to our democracy as a whole.”

“For the nearly five decades since Roe v. Wade was decided, Granite Staters have lived in a country where access to safe, legal abortion is a constitutional right — today, those protections are very much on the line,” said Rep. Annie Kuster, founder and co-chair of the Bipartisan Task Force to End Sexual Violence. “As an adoption attorney for 25 years, I worked with more than 300 birth mothers making the most personal and difficult decisions of their lives. They consulted their families, loved ones, and doctors, but no one looked to the government to make that choice for them. States across the country including New Hampshire have already passed legislation to restrict access to abortion, and we must do everything we can to protect access to safe reproductive care for all. Earlier this year, I helped pass the Women’s Health Protection Act — legislation to codify the constitutional right to an abortion as established in Roe v. Wade. Regardless of the Supreme Court’s decision in the case they will hear on Wednesday, it is essential we get this bill signed into law to permanently protect the reproductive freedoms of women across our country.”

“We must do all we can to draw attention to and stand against legislation that places onerous burdens on women and health care providers because this is inconsistent with who we are as Granite Staters. The House has passed the Women’s Health Protection Act and I hope there’s a path forward to pass this legislation into law and codify Roe v. Wade, which has strong support in New Hampshire and across the country. We can no longer count on the Supreme Court to defend Roe and be the backstop as they have been – in this new era it’s up to us to fight back,” said Rep. Chris Pappas.

“Here’s the truth – one in four women of reproductive age in this country has had an abortion. Everyone knows and loves someone who has had an abortion. An individual’s ability to access this care is a matter of equality and liberty. But we are at a crisis moment for abortion rights: the threat to the constitutional right to an abortion has never been greater in our country. By next year, 26 states could lose abortion access. Planned Parenthood, abortion rights advocates, and health care providers are grateful for the entire congressional delegation for always standing up for the full range of reproductive health care services, including access to safe, legal abortion, no matter a person’s income or zip code, because abortion is essential,” said Kayla Montgomery, Vice President of Public Affairs, Planned Parenthood of Northern New England/Planned Parenthood NH Action Fund.

You can watch the recording here.

In New Hampshire, there is no proactive protection to abortion access in state law. Until recently, the New Hampshire legislature enjoyed a longstanding bipartisan commitment to upholding privacy around personal medical decisions. In fact, in 1997, Shaheen, as Governor of New Hampshire, repealed the only pre-Roe law on the books with the support of Republican majorities. But New Hampshire is now facing unprecedented threats to reproductive rights at the state-level.

In September, the New Hampshire Executive Council voted to terminate contracts for family planning providers across the state. In response, the congressional delegation hosted a press event in September with representatives from Planned Parenthood of Northern New England, Equality Health Center and Lovering Health Center to discuss the dangerous consequences of the council’s vote. That followed the delegation’s letter to the Biden administration calling for the swift distribution of supplemental assistance directly to providers impacted by the Executive Council’s decision.

The Executive Council’s vote is particularly egregious as it follows years of the Trump administration’s attacks on women’s reproductive health, most notably, President Trump’s implementation of the “Title X Gag Rule,” which shut out the majority of New Hampshire family planning providers from receiving federal grants. The delegation welcomed an announcement last month from the Department of Health and Human Service (HHS) that the Office of Management and Budget (OMB) would approve a rule change to reverse the Title X Gag Rule and help bridge the gap in funding for providers. In June, Senator Shaheen sent a letter to Health and Human Services Secretary Xavier Becerra urging him to provide support to New Hampshire family planning providers who will lose state funding under the New Hampshire budget bill.