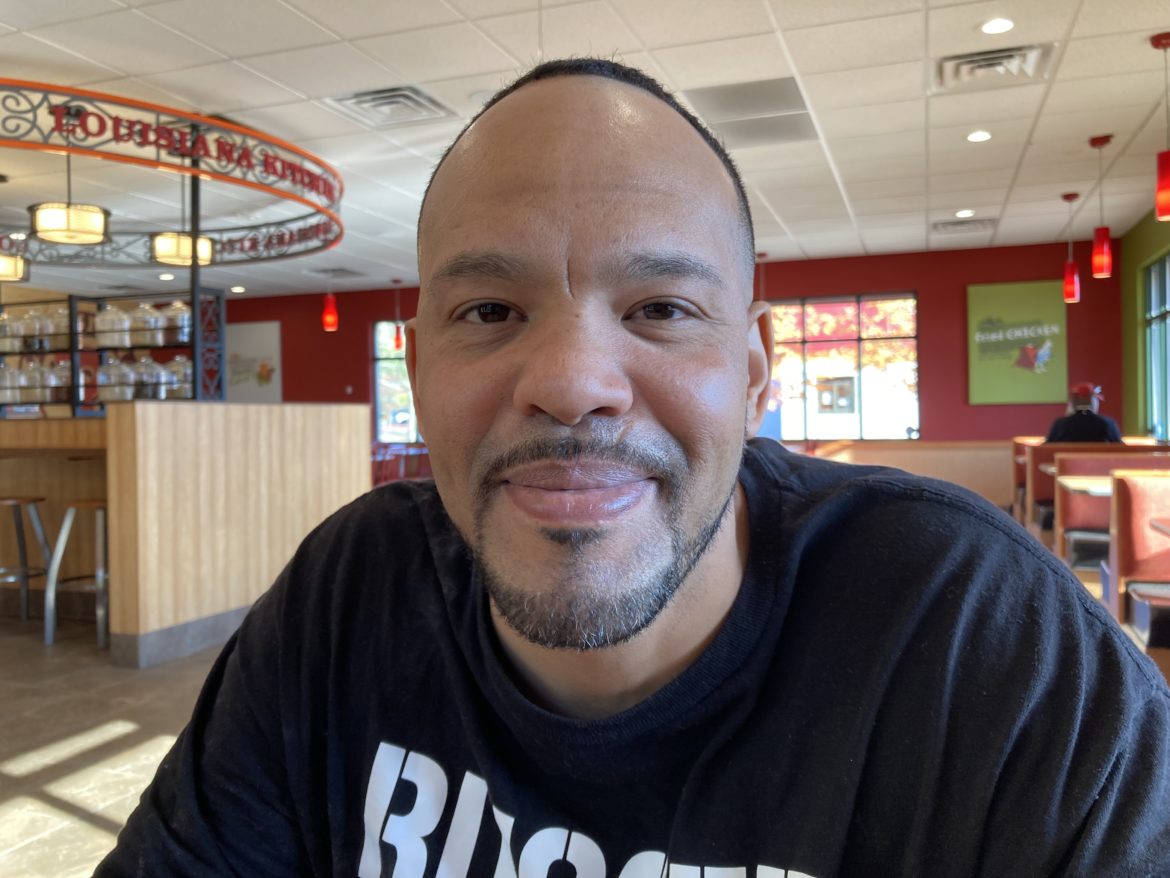 Marcos Nieves lived in Hampshire House in Manchester, federal transitional housing for people reentering New Hampshire communities from federal prisons. He needed an apartment or, to begin, a room in a rooming house. He had a job at Popeyes earning $13 an hour. He has skills running heavy equipment and wants to get another job in construction or in a warehouse.  He wants to continue his studies in the area of computers and technology.

But he has to have an address. “Probation requires you to have an address,” he said. None of the rooming houses had returned his calls and he had to be out of Hampshire House by Nov. 18.  “I was incarcerated for 83 months,” Nieves said, on drug charges and on the federal offense of illegal possession of firearms and ammunition.  Berlin for three years.  Then New Jersey, Georgia, and Florida. At FCI Williamsburg, South Carolina, he got his GED. This summer he came home to Manchester where his mom and three brothers live. He’s under supervision for three years.

Stable housing has always been a marker for successful return to the community for people who’ve been incarcerated.  Manchester’s Anthony Harris, who was once incarcerated himself, knows this. He, with others, some of whom are also formerly incarcerated, have formed a nonprofit and one thing they want to provide is transitional housing.  “We’ve all done it,” Harris said.  “We’re living examples.”

The non-profit Harris is co-founding is called The Next Chapter, the B.O.S.S. Initiative, Beat the Odds Now Striving for Success. It was formerly called Felon to Freeman.  “Not a good name,” Harris said. “No one likes the association with felon.”  When Next Chapter is fully operational, in addition to supporting transitional housing needs, they will offer trainings in daily life skills, finding jobs, and connecting to programs that lead to long-term housing.  An example is a connection to financial and housing information such as New Hampshire Housing Finance Authority.  The NHHFA site states, “Our programs address affordable and workforce housing needs, as well as supportive housing for vulnerable and underserved populations including veterans, persons with substance use disorders, the formerly incarcerated… “

Harris said, “I talk to a lot of people just released from Valley Street [Jail] who don’t have any place to go. “You hear everyone talk about affordable housing, but affordable to who?” Harris said. New Hampshire Housing Finance Authority lists the median monthly rent at $1,546, but Harris sees new developments getting $2,000/month.

“Look at the average wage. How do you sustain living even with no felonies? Now we have lack of housing, the high rates of housing, and you add felonies so a previously incarcerated person is really facing astronomical odds at making it.” Not finding stable housing is a main cause of recidivism.

Many agree that there’s a lack of safe, supportive, sober rooming houses in the state.  But, Harris said, even rooming houses are cracking down and are less willing to rent to the formerly incarcerated.

To offer wider context to one man’s attempt to find a place to live after prison,  the Brookings Institute reports that nationally “over 640,000 people return to our communities from prison each year. However, due to the lack of institutional support, statutorily imposed legal barriers, stigmas, and low wages, most prison sentences are for life—especially for residents of Black and Brown communities.

“Imprisonment rates are five to eight times higher for Black Americans than any other racial/ethnic group…”https://www.brookings.edu/research/a-better-path-forward-for-criminal-justice-prisoner-reentry/

Carrie Conway, Criminal Justice Programming Coordinator in the Strafford County Community Corrections Program said, “We don’t want to hold someone incarcerated because they’re homeless.  An approved address is required by the court.  It doesn’t have to be a heated apartment with two bedrooms. It could be an encampment area. A transitional housing address? Absolutely!”

Harris, who is also a member of Rights & Democracy New Hampshire, and on the NH

Empowerment. HOPE is directed by the city of Manchester’s Director of Homeless Initiatives,

Schonna Green. It is a wide-reaching and, indeed, hopeful initiative. Green is quoted in the New Hampshire Business Review as saying, “There is no way anyone should be building without 5% to 10% devoted to affordable housing or making a donation.”

Harris said, “When you have a place to live, and you can sustain it, you can thrive.” He’s meeting with other state leaders on issues of housing and criminal justice policy.  “When we get this going we are going to change so much. It’s bigger than us. We’re going to lay down the blueprint for what the city needs.”

At Strafford County jail, Carrie Conway said about housing after incarceration, “We need to understand that we are a community and let’s step up and ask, ‘How can we integrate this person back into the community?’”  Heather Bragdon, Strafford County Director of Transitional Housing said, “To move on you need housing, food. You need stability.”

Two days before Thanksgiving, this writer was able to reconnect with Marcos Nieves, several weeks after first meeting up at Popeyes. He is subdued but his news is decent. He said, “Through a friend of mine I got a place at Welcome Home on Concord Street.”  He got a construction job with Rangeley Enterprises in Raymond, demolition contractors.  He said he’s working heavy machines, breaking down rocks into gravel, working with other ex-incarcerated. He has a single room. “Me and my neighbor share a bathroom. It’s ok.  But it feels like the halfway house.” He expects his pay to increase to $17/hour in January and then he’ll look for a 1-bedroom or a studio. Supervision is ok. “They call to give me urine tests. They come to see the room.”

“I’m not 100 percent but I’m doing better.” He’s going home to his mother’s for Thanksgiving.