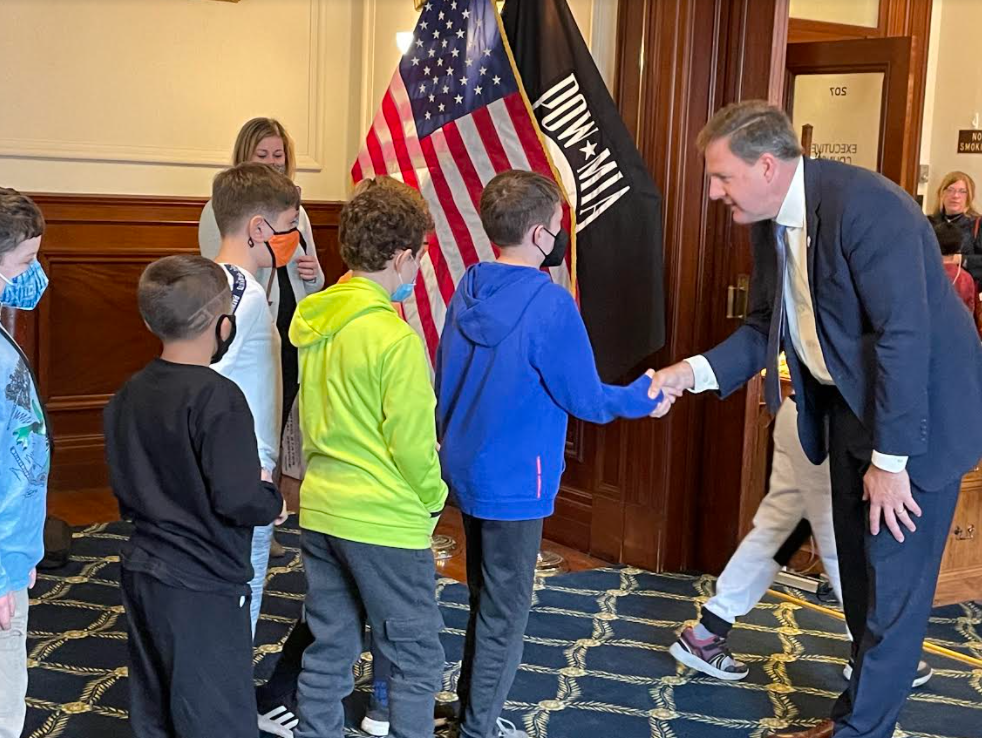 Gov. Chris Sununu is pictured shaking hands with a student tour group at the Executive Council meeting at the State House Monday.

On Monday, the state Department of Health and Human Services announced hours after the meeting 3,155 new COVID-19 cases, 10 deaths and 343 hospitalizations mostly from Friday through Sunday with a few from the week before.

The record high numbers included 790 infections in children under age 18. Sununu didn’t mention the numbers at the meeting or hold a COVID-19 update news conference after as he has been doing recently and he didn’t hold one last week.

There were no pardoned turkeys this year at the Thanksgiving Executive Council table, but Sununu noted some semblance of normalcy as he was able to shake hands with students touring the State House, one of his favorite duties as governor.

The Centers for Disease Control recommends wearing face masks in public buildings where the community transmission rate is substantial or high as it is in New Hampshire and New England. Masks are optional at the State House.

The students from Londonderry who attend the Matthew Thornton Elementary School did wear face masks while shaking Sununu’s hand at the meeting. Sununu is rarely seen wearing a face mask indoors.

But greeting mask-wearing children without Sununu wearing one as the COVID-19 numbers continue to climb concerned state Sen. Tom Sherman, R-Rye, a physician, who said the governor should be leading by example.

“That is why it baffles me that the governor refuses to lead by example as our communities struggle with record high case and hospitalization rates,” Sherman texted to InDepthNH.org.

“While he predicts the pandemic will grow worse in New Hampshire he himself doesn’t even follow CDC guidelines to protect himself and those around him from this deadly virus,” Sherman said.

InDepthNH.org reached out for comment to state epidemiologist Dr. Ben Chan, and spokesmen for Sununu and the Department of Health and Human Services, but they didn’t immediately respond.

This was the first time since June that the Council was back in its chambers on the second floor of the State House after a summer of touring the various council districts and visiting Franconia, Keene, Nashua, and Manchester.

In recent weeks due to security concerns because of protesters against the Council finally accepting $22.5 million in federal funds to boost vaccines, the meetings have been held at the Department of Environmental Services auditorium and at the State Police Academy.

Republican Councilor David Wheeler attended Monday’s meeting remotely from his home in Milford but all other Councilors were at the table Monday.

While many people attended Executive Council meetings this summer without face masks, about 20 percent of the attendees wore masks Monday, an apparent response to the growing surge.

Republican Executive Councilor Ted Gatsas sounded the alarm Monday that marijuana is being laced by fentanyl in the state and he wants to see enhanced penalties for those who pedal it.

Gatsas said in Manchester he heard of an individual who had to be administered multiple rounds of Narcan after accidentally overdosing on marijuana-laced with fentanyl.

He called for the Council to draft a memo to the Senate President and Speaker of the House to bring attention to the need for enhanced penalties.

Sununu, who with Education Commissioner Frank Edleblut noted the virtual anti-drug seminar for youth scheduled for Tuesday will be almost double the size of an in-person event held a few years ago, said this is a concern the state needs to address.

Sununu suggested that during an upcoming breakfast meeting, health and education leaders address Gatsas’ concerns, which was agreed to by the Council.

Sununu offered a proclamation for Thanksgiving with members of the New Hampshire Mayflower Society. Attending the meeting were several members of the society.

The proclamation says the first Thanksgiving holiday was declared by President Abraham Lincoln after being pressed by writer and New Hampshire native Sarah Josepha Hale to do so.

Members said since the pandemic they have raised funds to buy children’s books related to the early settlers and make donations so at least two books are available for children to borrow in all of the more than 200 libraries across the state.

Jay and Karen Lucas of Portsmouth were recognized for their philanthropic efforts through the scholarships offered to the Children of the Fallen Patriots.

Nationally, 2,000 children of soldiers have been able to take advantage of the scholarships. For each dollar donated, Jay Lucas said, 98 cents will go to the children at fallenpatriots.org.

Elizabeth Bielecki of Bedford has resigned as director of the Division of Motor Vehicles. She was praised by Sununu and Councilor Joe Kenney, R-Wakefield, for her response to the public during the pandemic and other times in her career. She served the state for the past 19 years.

Carollynn Lear of Goffstown was confirmed as assistant commissioner of the state Department of Revenue Administration. She will receive a salary of $132,866 a year.

Two members of the Community College System Board of Trustees were confirmed. They are Donnalee Lozeau of Nashua representing the general public, and Richard Ackerman of Lebanon as the representative for the technology sector.

The Council approved a late agenda item for COVID-19 testing at home.
Jonathan Bowers said the antigen test production went down this summer but now the state is seeing an increase in demand for such at-home tests.

The cost is nothing to the recipient and will cover as many as 100,000 doses with the money coming from FEMA.

Kenney said, “I support this, particularly as I represent many rural areas. This can only be used to fend off COVID-19.”